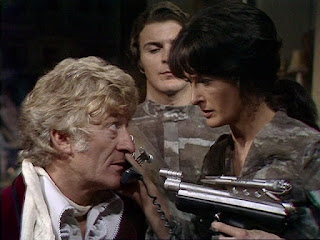 A guerrilla fighter from an alternative timeline on Earth, Anat hailed from a version of the 22nd Century where the planet had been totally subjugated by the Daleks, aided by their Ogron servants. She lead a three strong team to travel back to 20th Century Earth to assassinate the British diplomat Sir Reginald Styles, who had gone down in history as the man responsible for the Dalek invasion's success. He had gone mad and blown up a peace conference he was chairing at his home, Auderly House. The Doctor and Jo Grant had decided to spend the night at the house, following an earlier failed attempt by the guerrillas to kill Styles. Anat proved to be the more reasonable of the trio, less trigger happy than her comrades Shura and Boaz. After Jo had been accidentally transported to the 22nd Century, the Doctor insisted on accompanying Anat and Boaz there to find her. It was Anat who convinced her leader, Monia, that the Doctor was worth rescuing from the Daleks, and she took part in the attack on the European Controller's HQ. When the Doctor worked out that it was the injured Shura, left back in the 20th Century, who blew up the conference, Anat helped the Doctor get back to his own time to prevent this. The version of Anat met by the Doctor and Jo would not have existed in the "real" timeline, though she may have experienced the Dalek invasion thwarted by the First Doctor, had she ever been born.