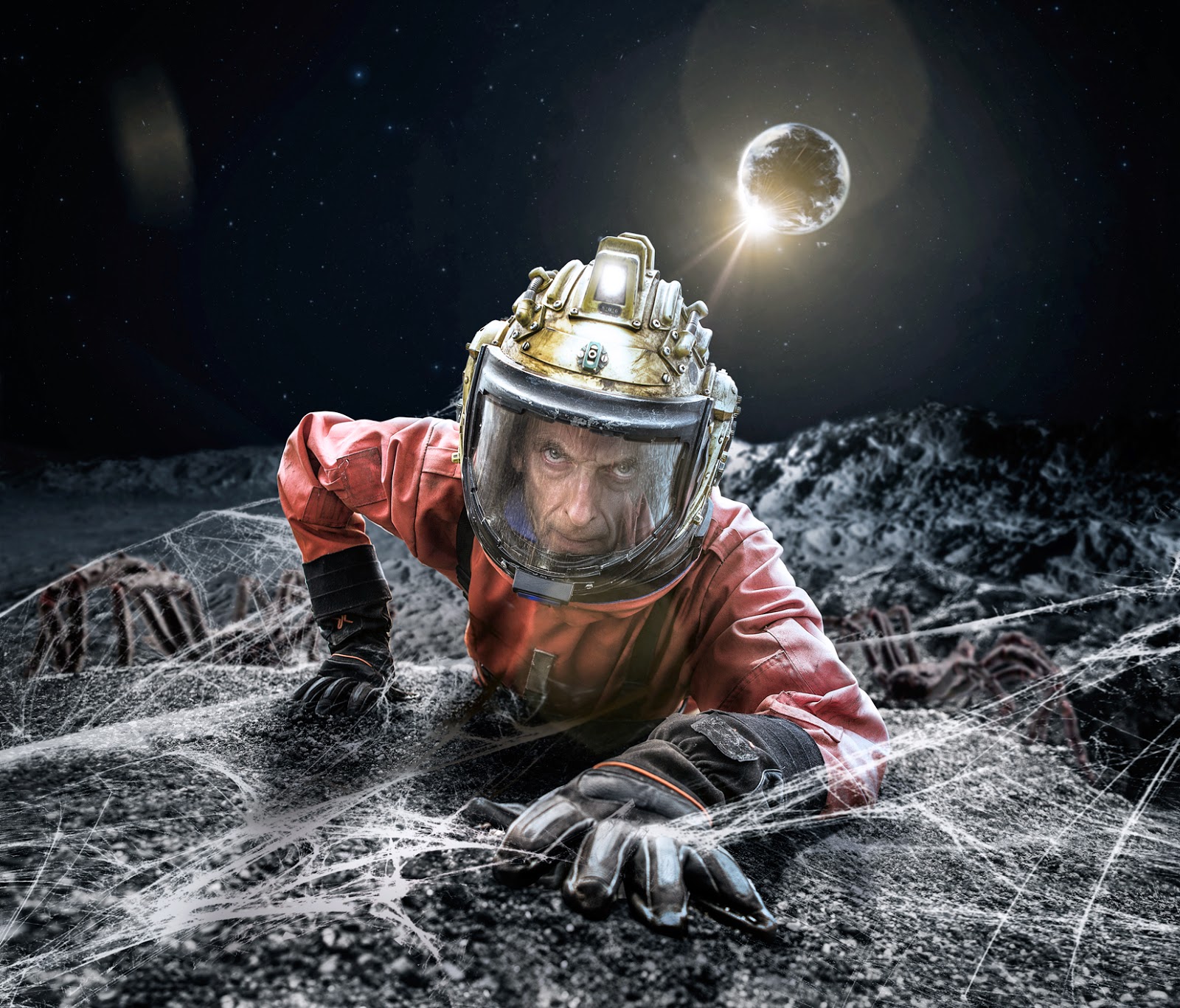 One of those stories where it was certainly best not to know very much in advance. Had I known that the Moon was going to prove to be a ginormous egg I would not have approached this in the right frame of mind. When you think about it, it is a silly concept. Imagine if the synopsis had read "The Doctor and Clara arrive on the Moon to find it is an egg about to hatch a baby dragon. They then have a big argument." Might have given that one a miss. As it was, that is exactly what this story boils down to - yet it worked beautifully.
After one of the briefest pre-credit sequences, which was actually a throw-forward to the latter part of the story, we pay a quick visit to Coal Hill School where the Doctor is somewhat bullied into doing something to lift Courtney's self-esteem -  he having apparently deflated it in the first place. Quite how the Doctor could be held responsible for her going off the rails, when she was Miss Disruptive Personality 2014 already, I don't know. Things move rapidly - no messing about with the storyline - and we are on the Moon, meeting the space shuttle crew who have come to blow it up as it is threatening to destroy the Earth. 10 minutes in, and our heroes are already being threatened by giant Moon spiders. A brilliant new monster design, kept mostly to the shadows and augmented by nice sound effects, a new generation of arachnophobes will have just been created I'm sure.
And this is what we thought this whole story was going to be about. As it was, they were  - a bit like the Blitzer last week - a threat of the week only. Turned out the story wasn't really about them at all.
They prove to be very big bacteria, living on something even bigger. Something over a billion tons.
Which brings us to the big reveal that the Moon is really an egg, and its occupant is about to hatch.
Cue moral dilemma: destroy a newborn, unique, life-form to protect the Earth, or risk the planet's destruction.
One thing I did know about the story in advance was that the Doctor was going to do something "shocking". This proved to be his abrupt departure - leaving Clara, Courtney and shuttle commander Lundvik (Hermione Norris - a rather too understated performance) to make the big decision on their own. They are able, by an unlikely plot contrivance, to contact the Earth for the population to help them decide. Do you really think the entire planet could co-ordinate the big switch off in so few minutes? Maybe it was just the big electricity monopolies who voted.
As it is, Clara goes the opposite way anyway and stops the bombs. The Moon creature hatches out and the Earth isn't destroyed. It actually lays an egg of its own (bigger than itself), so we get a new Moon to replace the old one - so there wasn't really that much of a threat after all.
Happy ending. Well, not quite. Clara is furious with the Doctor for his departure at the crucial moment. Personally, I felt sorry for him as she raged against him. True, it hasn't been in his nature to stand aside in quite this way in the past - but he had a valid point. People need to make their own decisions, and he did trust Clara to make the right decision. He did the right thing, maybe just not in the right way. Thing is, Clara has never really committed fully to TARDIS life and all that this entails. She's a bit spoiled, wanting the best of both worlds. Travel and adventure but without the responsibility - something the Doctor himself has been accused of in the past. Turn up and topple an empire overnight, then disappear before the full effects of regime change are felt.
This story is going to change the relationship between the pair - for the better on both sides I hope.
From the trailers for next week's story, it looks like Clara is sitting this one out. The following story is supposed to be Doctor-lite on the other hand, so the rift won't heal quickly it seems...
Posted by GerryD at 22:41