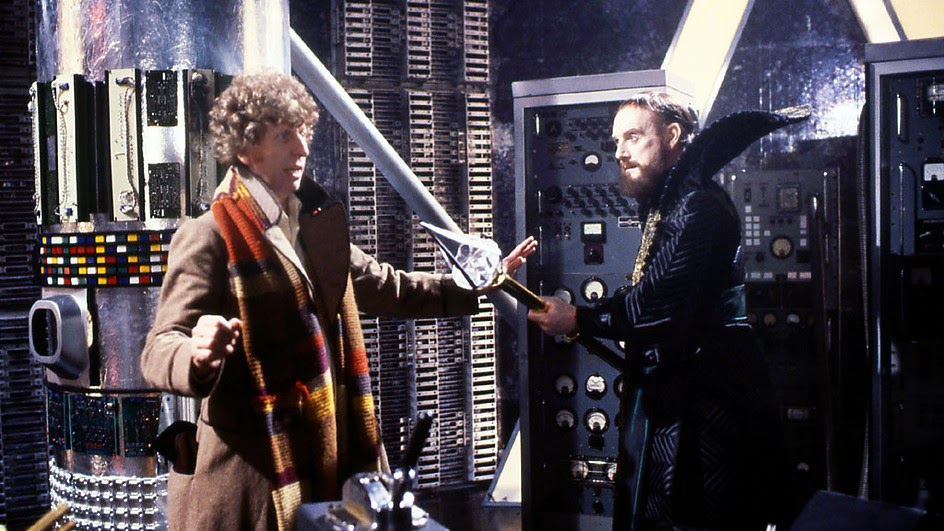 In which the Doctor decides to carry out some repairs to the TARDIS. He parks the ship in what he thinks is a quiet region of space and dismantles most of the key components - including the defences. There is another craft nearby, however, and it is exerting a massive gravitational force. The TARDIS is drawn towards it. The Doctor, Romana and K9 cross over to the vessel, which is damaged and drifting. On board, they discover a group of young people from the planet Aneth, as well as a cargo of Hymetusite crystals. It is these which have caused the gravitational effect. On the bridge there is only the Co-Pilot alive. In order to reach their homeworld of Skonnos earlier than scheduled he has encouraged his Pilot to push the antiquated ship's engines too far - wrecking them and killing the Pilot in the process. He explains that the young people and the crystals are being taken to Skonnos as a form of tribute owed by Aneth. The Doctor and K9 return to the TARDIS to fetch equipment, as they have worked out how the crystals can be used to reactivate the ship. Romana is left on board to carry out the work. As soon as power is restored to the engines, the treacherous Co-Pilot gets under way, with Romana still aboard. The Doctor and K9 see the ship depart, then discover a giant asteroid heading directly towards them - drawn here by the gravitational force. The Doctor cannot dematerialise, and there are no defences. 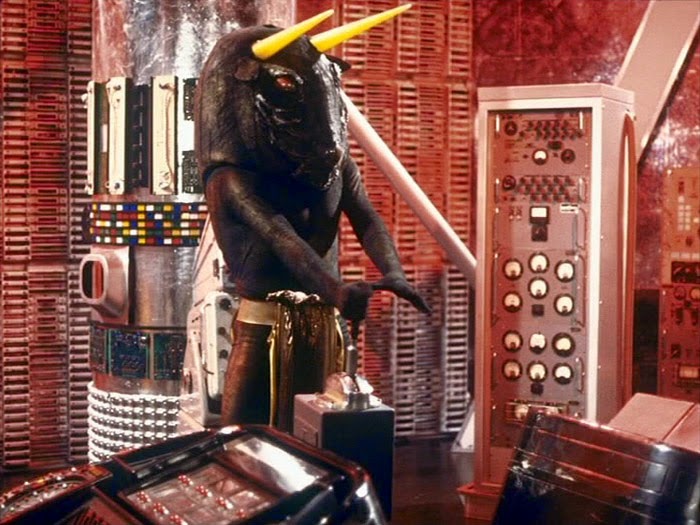 He spins the ship, knocking the asteroid away into space. He must then carry out temporary repairs to get the ship moving again, in order to pursue Romana. She has arrived on Skonnos and meets the ruler - a scientist named Soldeed. He realises that the Co-Pilot is lying when he claims to have used the crystal to re-power the ship. He simply doesn't have the intelligence. His actions have jeopardised Soldeed's great plan to re-establish the Skonnon Empire. Romana finds that she and the young Anethans are to enter the Power Complex with the crystals - and she realises this is some form of sacrifice. The Co-Pilot is forced to join them. They come upon a room full of dessicated corpses - the remains of previous tributes. They are then confronted by a huge bull-like alien - the Nimon. It destroys the Co-Pilot. It transpires that Skonnos once had a great empire which has long since declined. The Nimon arrived and promised to restore the planet to its' former glory. The Skonnons are obliged to supply a number of young people and the Hymetusite crystals - both of which they coerce from neighbouring Aneth. 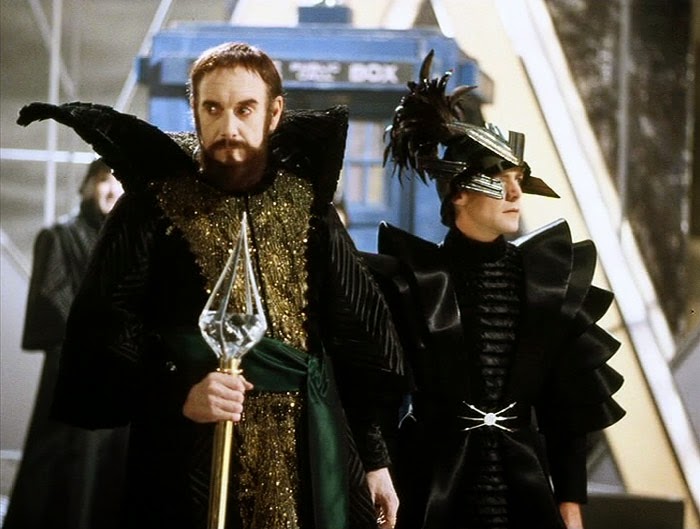 The Doctor finally arrives and follows Romana into the Power Complex. K9 is captured by Soldeed. Romana has managed to escape capture by the Nimon, along with two of the Anethans - Seth and Teka. Teka sees Seth as a hero who will free Aneth from Skonnon tyranny, but he is really just an ordinary teenager who has made some rash claims. Soldeed enters the Complex in pursuit of the Doctor. He is horrified to see that there are actually several Nimon present. He believed there to be only one lord. The Nimon are a parasitical race who establish an emissary on a victim planet, who promises great wealth / power. Young people and Hymetusite are asked for in return. The life-force of the youngsters is fed upon, whilst the crystals fuel equipment which creates an artificial Black Hole. This is a link to the planet previously conquered by the Nimon. As it dies, they travel to the new world in egg-shaped pods - starting the whole process over. Romana is accidentally transported to Crinoth - the planet currently inhabited by the Nimon. It is on the brink of destruction. She meets Sezom who, like Soldeed, had been fooled into allowing the Nimon to gain a foothold on his planet. He sacrifices himself to get Romana back to Skonnos - giving her a crystal which can destroy the Nimon. Soldeed is killed by Seth, but he activates a power overload as he dies. The Power Complex explodes - leaving the Nimon trapped on the dying Crinoth. Seth and Teka return to Skonnos with the freed tributes. 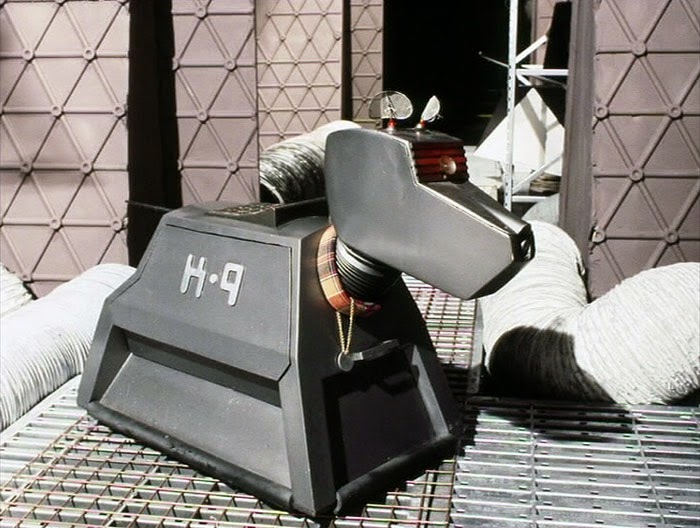 This four part adventure was written by one-time script editor Anthony Read, and was broadcast between 22nd December 1979 and 12th January 1980. As well as marking the (premature) end of Season 17, this generally unloved story is significant for a number of reasons.
It is the last story to be produced by Graham Williams; the last story to script edited by Douglas Adams; the last story to be scored by Dudley Simpson. It sees the last outing for the classic time tunnel opening titles and the Delia Derbyshire theme arrangement.
David Brierley voices K9 for the final time. And Tom baker says goodbye to his iconic multi-coloured scarf.
Of course, all these momentous events were never supposed to coincide with this story. There was supposed to be Shada...
When he was script editing, Read had helped steer the programme away from the Gothic horror tastes of Hinchcliffe and Holmes - especially the Universal and Hammer movie version of Gothic. Read and Williams looked to literature for inspiration. Underworld had been based on the Jason and the Argonauts myth, and in this story Read adapts the legend of Theseus and the Minotaur.
The Nimon is, naturally, the Minotaur. Soldeed is Daedalus - architect of the Labyrinth (the Power Complex). Seth is Theseus who would become king of Athens (Aneth). Teka's name derives from Attica. Skonnos is Knossos. Crinoth is Corinth. 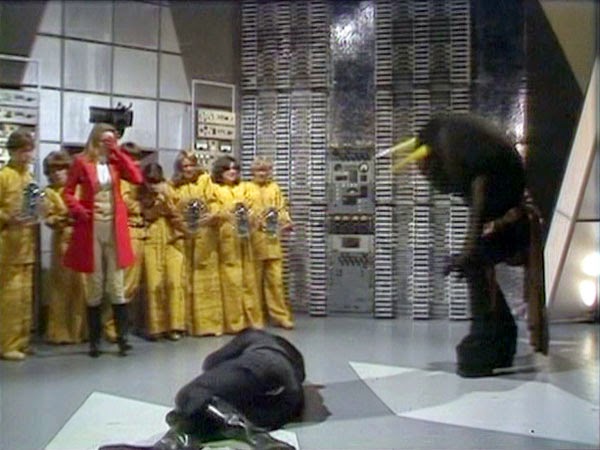 As with the preceding story, there is a good tale trying to be told. Most of the problems with The Horns of Nimon are superficial. The design of the monsters is laughable. The crew at the time believed that the bull heads were going to be helmets - but proved to be the final version of the creatures. There are some dreadful performances - especially Graham Crowden's OTT Soldeed. Future Blue Peter presenter Janet Ellis (Teka) is no actor. The humour is embarrassing at times (the sound effects when the TARDIS goes wrong a prime example). Then there is the Co-Pilot's infamous split trousers (see image above).
The Co-Pilot is played by the normally reliable Malcolm Terris. Best performance comes from John Bailey (The Sensorites and Evil of the Daleks). He plays Sezom. There is a good performance from Simon Gipps-Kent as Seth.
Episode endings are: 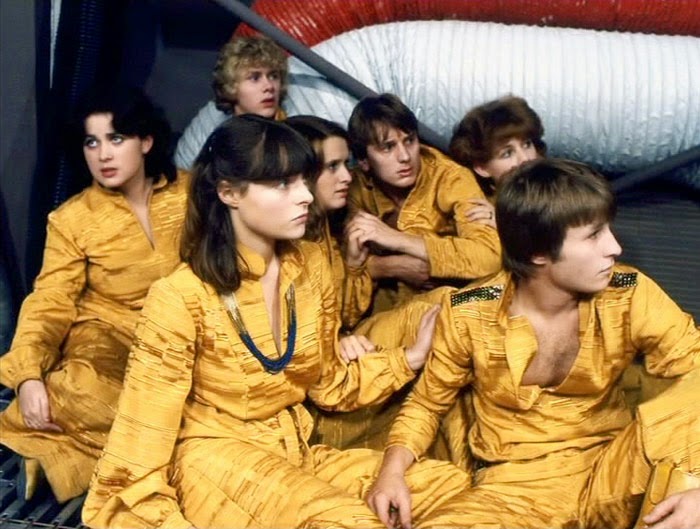 Overall, don't blame Anthony Read too much for this. It's the production values and guest performances that let this down so badly. Its broadcast over the Christmas period have always brought the word "pantomime" to mind. In the recent DWM 50th Anniversary poll, this did not rest at the bottom of the Tom Baker stories, but it was third least popular at number 223 out of 241. You hate Meglos and that other Greek myth inspired story Underworld even more.
Things you might like to know:
Posted by GerryD at 23:08