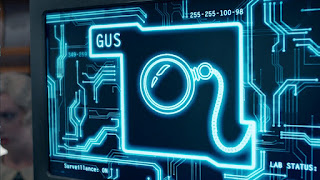 GUS was a computer interface which lured the Doctor and other experts onto the Orient Express spacecraft so that they could analyse and uncover the secrets of a being known as the Foretold. This was a mummy which only appeared to those it was about to kill. Victims died exactly 66 seconds after first seeing it. GUS had attempted this on a number of other space vessels, which it then destroyed when their passengers failed in their task. The Doctor was able to deduce that the Foretold targeted people who had a physical or psychological injury, and that the creature could take itself out of phase, which was why only the victims could see it. He decided to take on the mental trauma of one of the intended victims so that he could see and analyse it himself. The Foretold always appeared wherever a tattered flag was present, and the Doctor was able to work out that it was a soldier, obeying orders even after death thanks to alien technology implanted in its body. He was able to stop it from killing him by surrendering to it. The group behind GUS had wanted this technology so they could reverse engineer it for use as a weapon. The Doctor prevented them from getting the technology and so GUS blew up the train, but the Doctor managed to get the survivors into the TARDIS and away to safety.
GUS had previously tried to tempt the Doctor onto the space-going Orient Express just after Amy and Rory's wedding, but he had decided to take them on honeymoon elsewhere instead.
The Doctor never did find out who was behind GUS, but it may well have been the Ganymede Systems corporation, whom he later encountered when they were killing unprofitable space miners by hacking their computerised spacesuits.

Voiced by: John Sessions. Appearances: Mummy on the Orient Express (2014).