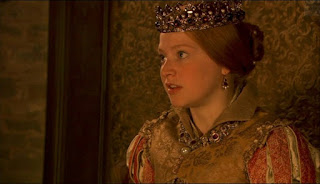 Sarah Jane Smith's friend and neighbour Rani Chandra was transported back in time to 1553 after the team went to investigate a newspaper report about an alien sighting. They had been lured to the man's shop in order to be sent on a mission to find three pieces of chronosteel which were scattered throughout history. They needed to be retrieved otherwise the Earth would be at risk.
Rani found herself in the Tower of London with the young uncrowned queen on the eve of Mary's arrival in the city. She had to pose as a maid servant and befriended the young noblewoman, helping to expose one of Mary's spies within the royal household, as well as stopping a loyal servant from killing her to make her a martyr to her Protestant faith. Whilst Rani knew of Jane's fate, she could not do anything to alter history, but she did help Jane through her last night of freedom, and she was able to assure her that history would always remember her. Rani found the chronosteel - the knife which the servant was going to use to kill Jane - and returned with it to the 21st Century.