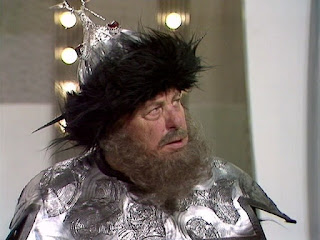 General Grugger was the leader of the Gaztaks, a mercenary squad employed by an alien named Meglos to abduct a human male from Earth and bring him to the planet Zolfa-Thura. Meglos needed the man in order to use him as a body print to impersonate the Doctor. Like the rest of his men, Grugger could not be trusted, and Meglos sealed him and his deputy, Brotadac, in to his control centre when he attempted to steal his equipment rather than complete the mission he had been paid for. Once Meglos had transformed himself to look like the Doctor, he had Grugger transport him to the neighbouring planet of Tigella so that he could retrieve the Dodecahedron, which powered the Tigellan underground city. This energy source was Zolfa-Thuran in origin, and was needed by Meglos to power a weapon of mass destruction. When Brotadac captured Romana, Grugger spared her life so that she could lead the Gaztaks to the Tigellan city, but she led them into a trap - attacked by hostile Bell Plants.
Back on Zolfa-Thura, Grugger once again proved untrustworthy and had Meglos incarcerated on his ship - intending to take control of the weapon for himself. However, the Doctor had sabotaged it, aiming it at itself, and Grugger and his men were destroyed in the blast.