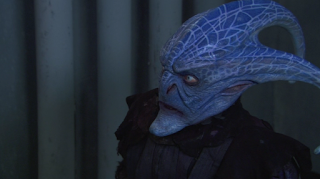 Cousins of the Graske race, from the planet Griffoth. They were identical in appearance, except for having blue skin. They were also less mischievous than the Graske, whom they disliked. A number of Groske became stranded on Earth, where they were taken in by UNIT and employed at their base built into Mount Snowden in Wales. One particular Groske helped Sarah Jane Smith and Jo Jones (nee Grant) when they visited the base to pay their final respects to the Doctor. The Doctor wasn't really dead, but a corrupt UNIT officer had entered into an alliance with the alien Shansheeth to steal the TARDIS. The Shansheeth had marooned the Doctor on an alien world, but he was able to swap places with Clyde Langer, who had previously been contaminated by Artron energy. The Groske was able to detect the Arton energy in Clyde's system.