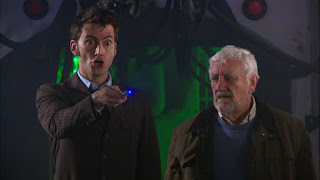 In which Wilf Mott is doing some late Christmas shopping and decides to drop into a church. Lately he has been having nightmares about a strange, maniacal figure. In the church he encounters a woman dressed in white who tells him of a legend concerning the founding of the place, and he realises that it refers to the Doctor as he spots what looks like the TARDIS represented in a stained glass window. The woman vanishes before he can find out who she is. The Doctor, meanwhile, has finally arrived on the Ood Sphere, following the psychic image of Ood Sigma which he had seen just after his doomed attempt to save Adelaide Brooke. Sigma is there to welcome him and takes him to meet their elders. They tell him of visions they have been having, and of the End of Time. They allow him to share these visions, and he witnesses glimpses of Wilf, an unknown man and woman, and the Master. The whole universe has been having nightmares about the Master. He realises that the Master has found some way to return from the dead, and rushes to the TARDIS. It materialises outside the ruins of the prison where Lucy Saxon had been incarcerated. He has delayed too long in going to the Ood Sphere and now it is too late. The Master had prepared for his return through a secret cult who followed his Harold Saxon guise. They possessed his ring, stolen from his funeral pyre, and from Lucy they obtained some genetic material from which to reconstitute him. However, Lucy has also prepared for his return, and she sacrifices herself to sabotage the resurrection. 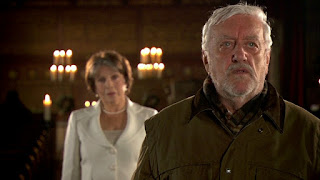 The Master still looks like Harold Saxon, and he is forced to hide amongst London's homeless -though even here he is recognised. His metabolism is breaking down - causing him to have a voracious appetite. At times he turns into a skeletal figure, and he is able to emit powerful energy bolts and to fly through the air. Wilf gets his friends together to hunt for the Doctor, and they are able to trace him after the TARDIS was spotted at the prison. They go to a cafe where Wilf intends for the Doctor to see Donna again, from afar. He would like to see her back the way she was when she travelled in the TARDIS, but the Doctor reminds him that to remember could kill her. Donna is about to be married, but she and her fiance have little money and there is a global recession. The Doctor finally manages to track down the Master to a nearby piece of waste ground. The Doctor wants to help him but is shocked to discover that his old enemy really can hear the sound of drums in his head. It is not just his crazed imagination. The Master is suddenly captured by black-clad troops and taken away in a helicopter. The following morning, Christmas Day, the Doctor goes to see Wilf, who has just seen the woman in white on his TV screen, warning that the Doctor is in danger, but he must not tell him about her. Earlier, Donna had given Wilf a book by a businessman named Joshua Naismith, but couldn't say why she had bought it for him. When Wilf shows the book to the Doctor he sees that Naismith is the man he had seen in the Ood visions. 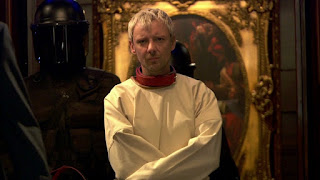 Naismith is a millionaire who has managed to salvage a piece of alien technology from Torchwood. It was he who has abducted the Master. It has been shown that the alien machine can repair injuries, and Naismith intends for the Master to refine the device so that it will make his daughter immortal. Two of his technical staff are really green-skinned alien Vinvocci in human disguise, named Addams and Rossiter. They are salvagers and have come to retrieve the machine. The Master is left to work on the device and realises its true potential. The Doctor and Wilf travel to Naismith's mansion by TARDIS and meet the Vinvocci, who reveal that the machine - the Immortality Gate - can heal entire planets. The Doctor and Wilf arrive in the main hall too late to stop the Master breaking free and leaping into the Gate, which is fully activated. It will translate the Master's body print across the whole of the Earth - turning everyone into himself. He is now the President of the USA, the whole Chinese People's Liberation Army, Naismith and his daughter, and even Donna's mother Sylvia and her fiance Lance. The Master is everyone, and everyone is the Master. Everyone, that is, except Donna Noble - but she is beginning to remember the Doctor...
Events on Earth are being observed from afar. On Gallifrey, on the last day of the Time War, Rassilon has a plan for saving the Time Lords... 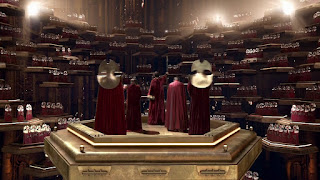 The End of Time Part 1 was written by Russell T Davies, and was first broadcast on 25th December 2009. It is the first half of David Tennant's epic final outing as the Doctor, and sees the return of the Master, as portrayed by John Simm, as well as reintroducing the Time Lords.
They are led once again by their great hero Rassilon, played by former Bond Timothy Dalton. He narrates the episode and is initially only seen in tight close-up - his Time Lord robes only being seen in a reveal at the story's cliffhanger.
In keeping with the rest of the 2009 special episodes, the Doctor is partnered with a stand alone companion - in this case the previously established Wilf Mott, played by Bernard Cribbins. Donna and her mum Sylvia also return. In the cafe scene, the Doctor comments on the coincidences which surround Wilf and his family. Long before meeting Donna he had encountered Wilf when he was selling newspapers on Christmas Eve just before the Titanic spaceship almost crashed onto the planet. Many enemies had failed to trace the Doctor and yet Donna had found him again, and Wilf and his pensioner friends - known as the "Silver Cloak" manage to trace him fairly easily.
Among the "Silver Cloak" we have the late great June Whitfield, as Minnie Caldwell, and Barry Howard as Oliver - best known for his role in the BBC sitcom Hi-de-Hi!. 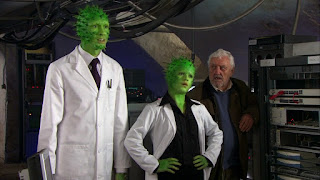 The Vinvocci are said to be related to the Zocci (Bannakaffalatta's people). They are green instead of red but have the same spiky features. Rossiter is played by Lawry Lewin, whilst Addams is Sinead Keenan, who had played werewolf George's girlfriend in Being Human.
Other returnees include Alexandra Moen as Lucy Saxon, and Paul Kasey as Ood Sigma. The Chief Ood Elder is voiced by Brian Cox, cinema's original Hannibal Lecter, and who has since featured in  many Holywood blockbusters such as the second X-Men movie, a couple of the Jason Bourne films and Rise of the Planet of the Apes.
Other cast members of note include Clare Bloom, who plays the mysterious Woman in White who appears to Wilf, and David Harewood, as Joshua Naismith, who is currently a regular in the Supergirl series. 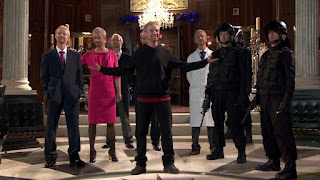 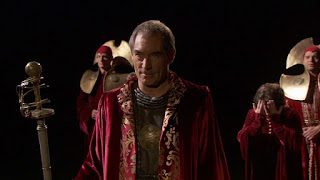 We'll take a look at the story overall, with a few more things you might like to know, once we have covered The End of Time Part 2 next time...
Posted by GerryD at 23:22