Inspirations - The Androids of Tara 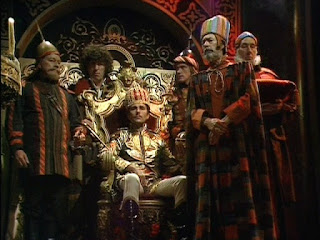 There's really not a lot to say about this one, as The Androids of Tara is very much a pastiche of one particular Victorian novel, which many know better from movie adaptations. If you knew that the working title for the story was "The Androids of Zenda", then that might provide the clue to which book we're talking about.
The Prisoner of Zenda was written by Anthony Hope and first published in 1894. It prompted a sequel some four years later - Rupert of Hertzau. Rupert is one of the villains in the original book, the dashing henchman to the real villain of the piece, Prince Michael (also known as Black Michael).
Count Grendel of Gracht (Peter Jeffrey) is a composite of the two characters.
The main plot for Androids comes directly from the novel, in that the new King is about to be crowned when he is abducted by his half-brother Michael. Should King Rudolf fail to attend the coronation, the throne will fall to Michael. The King has a distant relation named Rudolf Rassendyll who just happens to be visiting the country - the fictional Ruritania. Rudolph looks exactly like his regal cousin, so a pair of the King's attendants - Colonel Sapt and Fritz Von Tarlenheim - persuade the Englishman to take the King's place. The real King is locked up in a castle in the small town of Zenda. Matters are complicated when the English Rudolf falls in love with the Ruritanian Rudolf's betrothed, Princess Flavia.
Naturally, the King is freed and Michael vanquished, though Rupert (like Count Grendel) escapes to fight another day - and Rassendyll has to give up the Princess. 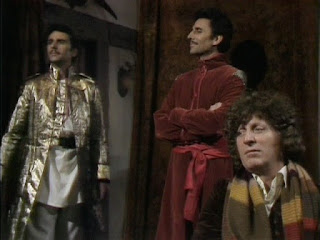 This being a Doctor Who story, the doubles are explained away as android duplicates, although Romana has a real double in the Princess Strella. Mary Tamm cited this as her favourite story, as she got to play four roles - Romana, an android Romana, Strella and an android Strella.
The King Rudolf character here is Prince Reynart. Actor Neville Jason was selected by director Michael Hayes as he resembled Ronald Coleman, who had played the dual role in the 1937 film version of the book, regarded by many as the best screen adaptation. Raymond Massey played Michael, with David Niven as Rupert of Hertzau. There was a shot-for-shot remake in 1952, this time in colour, which featured Stewart Grainger in the dual role, with James Mason as Rupert. 1979 saw a comedic version courtesy of Peter Sellers, who played the dual role as well as the old King.
British audiences might remember the 1984 BBC TV adaptation, made as part of the Classic Serials strand for Sunday evenings - produced by Barry Letts and script edited by Terrance Dicks.
Colonel Sapt becomes Swordmaster Zadek in The Androids of Tara (played by Simon Lack), whilst Fritz Von Tarlenheim becomes Farrah (played by Paul Lavers).
The electric rapiers might just have been a nod to the lightsabers in Star Wars. 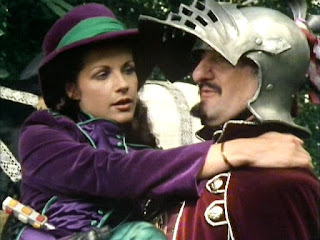 Location filming took place at Leeds Castle - which is in Kent, and nowhere near the Yorkshire city. Glass plate shots added some exotic turrets and minarets. There was a delay in getting access to the castle as it was being used to host a Middle East peace conference on the dates they originally wanted to use it.
Mary Tamm designed the purple costume herself after rejecting the itchy tweed outfit she was to have worn. This is surprising, as Tamm's astrologer had told her to avoid the colour purple when she first got the role. Perhaps the planets were in a more favourable conjunction.
Next time: Robert Holmes is brought back to cover a story that has fallen through, and he's challenged to include the biggest monster ever to appear in the series...
Posted by GerryD at 23:24