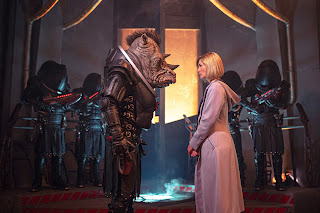 Foster isn't the only doctor who's gone to Gloucester... Seems there are some criminals lurking around Gloucester Cathedral, as it has been announced that the Judoon will be visiting the city's famous landmark in Series 12. The new series is filming there this week, and the BBC have released the above image as it looks like the rhino-headed policemen are likely to be spotted by the public anyway. From a video clip shown on BBC News website, the cathedral is playing itself in the present day, rather than being used as an historical backdrop as in the past (The Shakespeare Code was filmed in the vicinity, and the cathedral itself featured in the background for The Next Doctor).
The only change in their appearance seems to be that their leader has been given a mohawk hairstyle.
I can't say that this has exactly got me excited. They are way, way down the list of aliens I'd like to see return. The Judoon are extremely limited as characters, other than having some comic potential. They've only ever had one story to themselves - the Series 3 opener Smith and Jones - but they have been used as background aliens on a few other occasions. They worked well in the SJA story Prisoner of the Judoon, but that was played for laughs and featured a lone Judoon in a fish-out-of-water scenario.
At least the BBC are actually letting us know a little bit about what is going on this series. They were extremely heavy handed last time, slapping restraint orders on anyone who dared post anything which they deemed spoiler-y. This put a lot of fans' backs up. The ironic thing is that there wasn't a single thing which could have been leaked that might have been even remotely considered a spoiler.
Posted by GerryD at 21:10

Email ThisBlogThis!Share to TwitterShare to FacebookShare to Pinterest
Labels: Series 12