Inspirations - The Stones of Blood 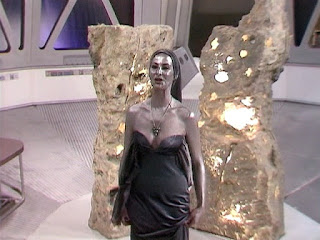 The Stones of Blood takes us up to the half way point in the Key to Time season. It is the first story to be written by David Fisher. It is also the 100th Doctor Who story, and the final episode was broadcast less than a week before the show's 15th anniversary. Naturally, there was a lot of coverage about the series during its broadcast.
The story itself was going to mark these events with a short sequence in the TARDIS prior to the story proper getting underway. It would have depicted Romana and K9 celebrating the Doctor's birthday with a cake and the gift of a new scarf - identical to the one he already wore.
Producer Graham Williams vetoed this sequence on the grounds that it was too self-knowing and self-indulgent. What we got instead was the rather dull scene of the Doctor and Romana in the black limbo room, where the Key segments appear to be kept in a fridge, recapping the story arc plot for viewers. The White Guardian is heard - but it is not Cyril Luckham. Rather, it was one of the actors who had been employed to voice the Megara justice machines which appear in the second half of the story. Romana finally discovers that it was the Guardian who sent her on this mission, rather than the President of the High Council of Time Lords.
It is a story of two halves. The first part is the best, and deals with British folklore and horror movie tropes. The second half sees the action switch to a spaceship in hyperspace, and a mini courtroom drama. The Doctor has unlocked a cell in which the aforementioned Megara have been trapped for centuries. Unfortunately this is a crime punishable by death, and the Doctor must defend himself against the charge whilst at the same time getting the justice machines to spot that the silver-skinned lady present is their original prisoner - the one who had escaped and locked them up in the first place. 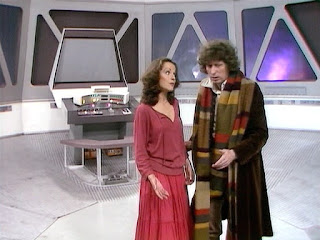 Hyperspace is basically a sub-region of normal space which can be entered and passed through in order to travel faster than light. It has been a staple of science-fiction for many years, in various forms. It can be accessed via wormholes, for instance. The word first appeared in Sci-Fi stories of the late 1920's. The spaceship in this story is stuck in hyperspace. It is just above the stone circle which forms the focus for the story, but can't be seen as it sits in that different dimension.
A pair of aliens from previous stories are seen among the other captives on board - a Wirrn from Ark in Space, and a Kraal android from The Android Invasion.
The name Megara could either come from the wife of Heracles, or the ancient city in West Attica in Greece.
The Megara who married Heracles came from Thebes. The goddess Hera made Heracles mad and he killed his wife and children. When his sanity returned, Heracles visited the Oracle at Delphi - seeking a means of assuaging his guilt - who sent him off to work for King Eurystheus, which is when he was given his 12 labours to perform. One of the characters in last season's story Underworld, also script edited by Anthony Read, was based on Heracles. 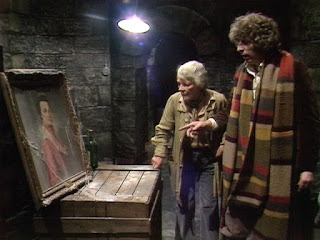 The Stones of Blood is notable for its predominantly female guest cast - including the villain. There have been very few female baddies in the series, and an attempt to include one in Colony In Space was actually vetoed as being a little too kinky. Fisher claimed that he devised female villains as a means of getting back at some aunts of his whom he loathed as a boy.
Here we have Cesair of Diplos. The spaceship carrying her ran adrift in hyperspace and she managed to escape to Earth in prehistoric times. The implication is that the stone circle - the Nine Maidens - was set up to mark the location of the portal to the ship. Cesair has then stayed around the immediate area ever since, taking on a variety of guises so that she can control the locality - marrying (then quickly murdering) powerful husbands, and even becoming the abbess of the local nunnery.
The squire has a number of portraits of her from down through the centuries, which he keeps hidden in his cellar. (They've obviously been down there for a while as they are covered in dust and cobwebs, and yet they must have been up on his wall not that long ago). The notion of a portrait giving away the identity of a villain might just have been inspired by The Hound of the Baskervilles.
One of the portraits is said to be by Ramsay. That would be the Scots artist Allan Ramsay (1713 - 1784), who was a much sought after society portraitist who would become painter to George III.
The convent which Cesair ran was dedicated to Saint Gudula. She was born in 646 AD in Brabant (modern Belgium). She is usually depicted holding a candle and lantern - referring to a legend that she always used to go to church before the sun rose, and a demon tried to extinguish her light so that she would lose her way. 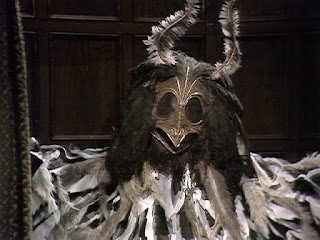 In the late 1970's, when the Doctor and Romana arrive in search of the third Key segment, Cesair is posing as Vivien Fay, a spinster of the parish who lives in a cottage near to the stones (but not in the manor house for some reason. Her history would suggest that it should have been more likely for her to have wed then killed squire De Vries - or one of his ancestors - and so lived at Boscombe Hall, where her portraits after all are to be found).
The name Fay is suggestive of Morgana Le Fay of Arthurian myth. Earliest versions of the story actually have her the magical protector of King Arthur, but over time she became his elder sister and is enemy. Unlike in the John Boorman film Excalibur, Mordred is her nephew and not her son via an incestuous relationship with Arthur. One of Vivien's earlier guises was called Morgana, just to ram home the Arthurian reference.
Fay also adopts the guise of an ancient Celtic goddess known as the Cailleach. She derives from Irish, Scots and Manx legend, and the word means old woman or hag. In Scotland she is known as the Queen of Winter and is a witch-like figure who dwells in mountain regions - created when she dropped rocks from her basket as she strode over the landscape. As a winter deity, it was claimed that she turned to stone every spring (which just happens to be Cesair's ultimate fate). There are many legends of how various lochs were formed involving the Cailleach - when she allowed a well to overrun when she fell asleep instead of watching over it. 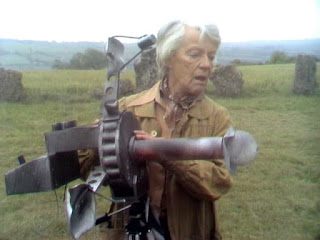 Staying with Vivien is the archaeologist Prof Amelia Rumford. As far as fandom is concerned, they are in a Sapphic relationship. It isn't obvious from what we see on screen, although Rumford does exhibit a fixation on truncheons and sausages...
Rumford is played by Beatrix Lehmann, in her final TV appearance. She was still acting on the stage when she passed away at the age of 76 in July 1979. The director had initially approached Honor Blackman to play Vivien Fay, but when she heard that Lehmann was playing opposite her she withdrew claiming that Lehmann would get all the best lines. The role of Fay went instead to Susan Engel. 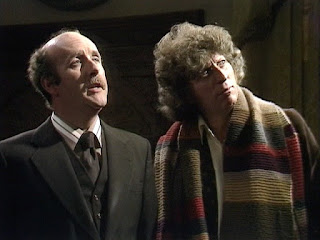 Other than the Doctor, the only significant male character we see is the squire - and he gets killed in the second episode. De Vries is said to be a follower of the Druidic religion. The Druids were the priests of the Celts at the time of the Roman invasion of Britain, said to worship in forest groves and to practice human sacrifice including burning people alive in straw effigies (a la The Wicker Man). The Romans were normally respectful of the religions they came across and often assimilated them, but they drew the line at human sacrifice and so wiped out the Druids, who made their last stand on Anglesey in North Wales. As the Doctor mentions, modern notions of the Druids are a 17th Century invention - a sanitised version developed out of antiquarian theories. The men with big beards wearing bed sheets who go round Wales and Glastonbury, or turn up at Stonehenge every Midsummer, derive from this more recent invention - despite what they claim.
One of the antiquarians (the forerunners of archaeologists) mentioned by Prof Rumford is William Borlase. He was a Cornish parson (the county where The Stones of Blood is set) and wrote two histories of the region. The Doctor mentions John Aubrey in relation to the background to modern Druids. Aubrey (1626 - 1697) embarked on a tour of England recording megalithic sites - often for the first time - and he collected many folk tales, myths and legends.
The scene which people remember most from this story - the two campers being killed by one of the Ogri - was a last minute addition to an under-running episode. Its the sequence which is most redolent of what's known as Folk Horror movies (films set in the countryside involving ancient evils being reawakened). Ogri comes from ogres, of course. Fisher had been thinking of the legendary British giants Gog and Magog (originally a single giant named Gogmagog), who are associated with the founding of London.
Next time: Double trouble for Romana on the planet Tara and the Doctor buckles a few swashes in a pastiche of a famous adventure novel...
Posted by GerryD at 00:44