Inspirations - The Robots of Death 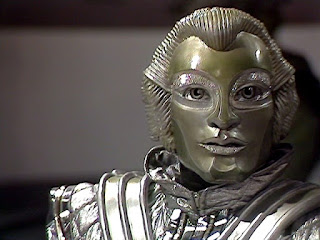 Now that we have showrunners writing multiple stories per season, having consecutive stories written by the same person is nothing unusual these days. It was a rare thing in the days of the Classic Series, occurring only a couple of times. Ian Stuart Black had followed The Savages immediately with The War Machines, and here - a decade later - we have Chris Boucher following The Face of Evil with The Robots of Death.
The main reason for this quick recommissioning was the fact that Boucher had created the character of Leela, and it was only late in the day that it was decided that she would become the Doctor's new companion. Other writers would have had to be brought up to speed on the new character, and it was not certain how long Leela was going to be kept on. Initially it was only to be until the end of the season.
One of the reasons given as to why Robert Holmes and Philip Hinchcliffe decided to rewrite Terrance Dicks' scripts for The Brain of Morbius in the previous season had been that his planned robot would have been difficult to realise on screen - yet here we are one year later and Hinchcliffe is specifically asking Boucher to write a story about robots.
Boucher decided to write a murder mystery, with a group of people trapped within an enclosed environment being picked off one by one. The original story title was "The Storm Mine Murders". The best known exponent of the "Whodunnit" is, of course, Agatha Christie, although the first detective novel is generally regarded as The Moonstone, by Wilkie Collins. Christie was certainly prolific - writing 66 novels and 14 collections of short stories. She created two of the most popular detectives in fiction - Hercule Poirot and Miss Marple.
The Moonstone was originally published in 1868, when it was serialised in Charles Dickens' magazine All The Year Round. The story introduced a number of plot elements which would go on to feature as staples of the detective genre - the country house setting, a number of red herrings, plot twists, inept local police and a number of characters who all have motive and some suspicious personal background. The detective of the piece is not a police officer, however. It is a gifted amateur sleuth, though one aided by a Scotland Yard officer. 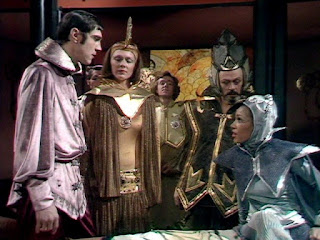 It has also been argued that Edgar Allan Poe should be credited with inventing the detective story. He had written a number of short stories in the 1840's which featured a detective solving seemingly insoluble crimes - including the "locked room" mystery of Murders if the Rue Morgue. Poe's detective (again not a policeman) was Auguste Dupin, who also featured in The Mystery of Marie Roget and The Purloined Letter.
Dupin solves the crimes through observation and deductive reasoning, and so certainly acted as an inspiration for Sir Arthur Conan Doyle's Sherlock Holmes and for Christie's creations.
In The Robots of Death, it naturally falls to the Doctor to take on the detective role.
It is clear from the opening moments of the story - and from the title - that it is the robots who are carrying out the murders. The real mystery is: who amongst the human crew is behind this, and why?
Boucher elected to have for a setting a massive factory craft scouring the deserts of a hostile alien planet for minerals. This gave him his enclosed, inescapable, environment.
For the Sandminer - or Storm Mine - we can look to the works of Frank Herbert for his inspiration.
Dune was published in 1965, having originally appeared in two parts in Analog magazine. It spawned 5 sequels. The book features a valuable substance which can only be found on a hostile desert planet. 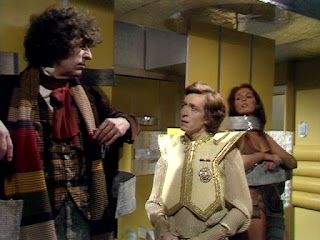 Another major influence on the story is the works of Issac Asimov. He had devised the Three Laws of Robotics, which first appeared in his short story Runaround in 1942. This was included in his 1950 anthology I, Robot. The Sandminer's commander - Uvanov - derives his name from Asimov.
Boucher has an undercover investigator at work on the Sandminer - a technician named Poul (named after science fiction author Poul Anderson). He is working in partnership with a robot sidekick - D84. This is an advanced robot (a Super Voc) masquerading as one of the drones, or Dum-class.
In 1953 Asimov had published a story called The Caves of Steel, which appeared in three monthly installments in Galaxy magazine, before being published in book form the following year. This featured a detective named Elijah Baley. Baley has for a partner a robot, called R. Daneel Olivaw.
This was adapted by Terry Nation for the BBC's 1964 anthology series Story Parade, with Peter Cushing as Baley and John Carson as R. Daneel.
Baley and R. Daneel returned in two further stories by Asimov - The Naked Sun (1955), and The Robots of Dawn (1983) whilst Robots and Empire (1985) featured just R. Daneel, as it is set many years after Baley's death. The Naked Sun was also adapted by the BBC, in 1969, as part of the Out of the Unknown series. In this R. Daneel was played by David Collings - who just happens to be playing Poul in this Asimov-inspired Doctor Who story. 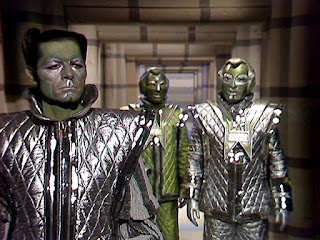 Production wise, it was director Michael E Briant's decision to go for an art deco setting for the Sandminer and its robot population. He had visited a relative on their merchant navy ship and found that the officers at least had quite comfortable surroundings. Briant reasoned that people stuck on a long voyage would want to surround themselves with beautiful things, and this inspired the look of the production. Hinchliffe was initially opposed to the realisation of the robots, but soon came to realise that Briant was right. Their beautiful looks and calm voices contrasted with their murderous actions once converted by the villain of the piece - crewman Dask. His backstory is that he was raised by robots and has come to think of them as his kin, enslaved by humanity. He sees himself as one of them, and wants to free them in a robot revolution.
Poul falls ill when he discovers that it is the robots who are doing the killing. This illness is called Robophobia, or Grimwade's Syndrome. Peter Grimwade, who would go on to direct and write for the series, had been a production assistant and AFM on Doctor Who for a number of years. He had been heard to complain that he always ended up working on stories with robots on them, so this was added as a joke. 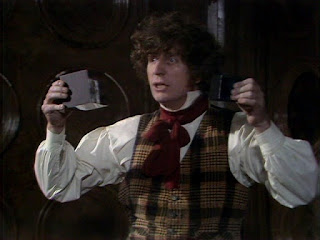 There is a scene in the TARDIS at the start where the Doctor attempts to explain to Leela how the TARDIS can be bigger on the inside than on the outside. Back in the very first story - An Unearthly Child - the Doctor had tried to explain this to Ian and Barbara using television to illustrate his point. The series never attempted any explanation again until The Robots of Death - the Doctor merely stating that the ship was dimensionally transcendental from the Pertwee era onwards.
Here the Doctor takes two boxes of different sizes and asks Leela to say which is the bigger. He places this at a distance from her and holds the smaller one close to her, then asks the same question. The bigger one is still the bigger one, although it looks smaller now that it is further away, and from where Leela is standing it could now fit inside the smaller box. The Doctor does not elaborate further, and attempts at any more detailed explanation will never be made again in the series, beyond that the interior occupies a different dimension to the exterior.
Tom Baker was still not happy with Leela's savage background, though the violence is toned down for this story. She is seen to throw a knife but only at a robot. As Louise Jameson had to wear red contact lenses to make her blue eyes appear brown, she could not see very well and the knife almost hit one of the studio crew. After this, she was given a less dangerous prop to handle.
Next time: the Hinchcliffe-Holmes era comes to an end, and goes out with a story inspired by numerous aspects of Holmes' beloved Victorian Gothic...
Posted by GerryD at 00:34