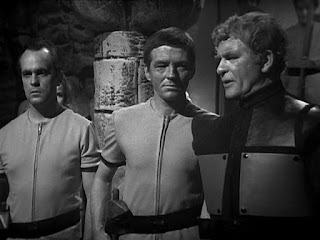 A humanoid race encountered by the Second Doctor on an obscure alien planet. Generations ago, this world had been visited by another race called the Krotons. Their ship crashed and there were only two survivors - not enough to power the vessel, which required mental energy. The Gonds attacked the Krotons but were defeated, with a large area near the spaceship reduced to a wasteland where the Gonds were forbidden to go. The Krotons went into hibernation but their ship manipulated the Gonds' development so that they would provide the mental energy needed to replace the dead crew. Some science was denied them, in case it could be used against them. Each year, teaching machines would identify the two brightest students who would then be summoned into the Kroton ship. It was thought that they were transported away to the Kroton planet, but the Doctor and his companions had landed in the Forbidden Zone and they had seen that the students were killed after their mental energy had been drained. The Gonds were led by a man named Selris, but his position was under threat from a man named Eelek. The Doctor, Jamie and Zoe rescued one of the students - Vana, whose boyfriend was Selris' headstrong son, Thara. The Doctor joined forces with Thara and a scientist named Beta to find a way to destroy the Krotons, who had been reanimated after Zoe had used the teaching machines. Beta and Jamie created an acid which would attack the Kroton spaceship, and Selris sacrificed himself to get a phial of the acid to the Doctor after he and Zoe had been forced by Eelek to hand themselves over to the Krotons and enter the vessel. The acid destroyed the Krotons and their ship, leaving the Gonds free to develop at their own pace.