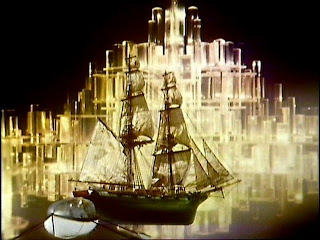 In which the TARDIS suffers a power failure. As the Doctor struggles to work out what could be causing this, the White Guardian of Time appears and attempts to pass on a message. Alarmed, Turlough tries to stop this but the Guardian is able to give them a set of co-ordinates before vanishing. The Doctor takes the TARDIS to the location specified and they find that they have materialised in what appears to be the hold of a sailing ship. The Doctor and Turlough set out to explore whilst Tegan is left in the TARDIS should the Guardian reappear. He does - giving a cryptic warning. Tegan then sees a young man on the scanner, who appears to be looking into the ship and who can see her. She goes outside to look for him. The Doctor and Turlough have found the crew quarters and have learned that it is the Edwardian era. This vessel is about to take part in a race, and the Doctor has been expected. This proves to be a mix up over his title - it being also the name given to the ship's cook. An officer appears and escorts the Doctor and Turlough to the bridge, where they are reunited with Tegan. The man she had seen is Mr. Marriner, first officer of this vessel - The Shadow. They meet the captain - Striker - and the Doctor discovers that the officers are not all they seem. They appear to be able to read their minds. Tegan is feeling seasick and is given a cabin to rest in - which appears to have elements of her room on the TARDIS as well as her old bedroom back in Brisbane.
The race commences, and the TARDIS crew discover that it involves ships from different periods of Earth's history - all floating in space. 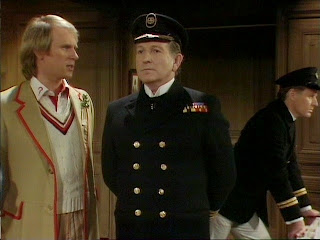 The Doctor learns that whilst the crews of the vessels are from Earth - conditioned not to realise where they are - the officers are all immortal beings called Eternals. These creatures exist outside of Time. They have long exhausted their imaginations and seek their entertainments from the minds of ephemeral beings such as humans. This race will take place through the Solar System, using the planets as marker buoys. The winner will gain "Enlightenment" as a prize. A number of the ships are destroyed as the race proceeds, and the Doctor becomes suspicious of the circumstances. He suspects that one of the captains is prepared to use any means necessary to win. Striker states that his principle rival is Captain Wrack of the pirate ship The Buccaneer. The Black Guardian finally loses patience with Turlough, who no longer wants to harm the Doctor, and claims he will be left on The Shadow for all eternity. In despair, Turlough throws himself overboard whilst they are out on deck wearing spacesuits. He is rescued by The Buccaneer. Soon after, Wrack invites all her fellow contestants to a party aboard her vessel. Striker does not intend to go, but the Doctor asks to attend in his place in order to retrieve Turlough. Tegan and Marriner will go with him. On the pirate ship, Turlough has discovered that Wrack is also in league with the Black Guardian. He is helping her to destroy the competition. He tries to ally himself with Wrack, to save his own neck. At the party, Wrack separates Tegan from the Doctor and freezes her in time. She gives her a small red jewel, which she adds to Tegan's tiara. Tegan then rejoins the party oblivious to what she has done. The Doctor fails to get Turlough back. The boy claims he does not want to go with him and would prefer to stay with Wrack. Back on The Shadow, the Doctor works out how Wrack is destroying the other ships. She is able to focus destructive energy through the red gemstones. He realises that they have inadvertently brought one of these aboard. The Doctor smashes it, but this only multiplies the power. He must collect the shards and throw them overboard - which he does with only seconds to spare. Wrack has disposed of all the other captains and their officers by making them walk the plank into space at the conclusion of her party. The end of the race comes into view - a vast crystal city floating in space. It looks as if The Buccaneer will get there first. The TARDIS has gone missing and the Doctor asks for it back in order to try to stop Wrack. Striker reveals that he hid the ship in the Doctor's own mind. The Doctor uses it to return to The Buccaneer. Soon after, Striker and Tegan see two bodies ejected into space. They fear the worst and assume that it was the Doctor and Turlough. The pirate ship reaches "Enlightenment", so Striker, Marriner and Tegan cross over to it to congratulate Wrack. Instead, they find the Doctor and Turlough. It was Wrack and her first mate who fell into space. The Black and White Guardians both appear. The Eternals are sent back to where they came from. The Doctor is offered the prize and turns it down. He does not want to know everything there is to know. Turlough is offered a part share for helping bring the winning ship into dock - a huge gemstone. He rejects it, and the Black Guardian vanishes in flames. Turlough is now free of him. The Doctor explains that "Enlightenment" wasn't the crystal, but the choice. 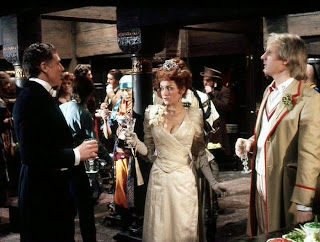 This four part story was written by Barbara Clegg, and was broadcast between 1st and 9th March, 1983. It brings the Black Guardian Trilogy to a close. It is significant for being the first Doctor Who story to have been written by a woman. A previous female co-writer credit (for The Ark) had been purely nominal - Lesley Scott had not written any of it.
The story also had a female director - the late Fiona Cumming - as well as a strong female villain role. Wrack is played with relish by Lynda Baron - best known to UK viewers as Nurse Gladys Emmanuel, the object of desire for Ronnie Barker's stammering shopkeeper Arkwright in Open All Hours. Baron had been heard but not seen in the programme before - she sang the Ballad of the Last Chance Saloon in The Gunfighters. She returned to the programme during Matt Smith's tenure (as Val in Closing Time).
As with much of the anniversary season, Enlightenment was troubled by industrial action. The production dates had to be changed and original casting had to be abandoned. For instance, Peter Sallis (The Ice Warriors) was to have played Striker. His work on perennial sitcom Last of the Summer Wine meant that he wasn't available for the new dates, so Keith Barron took over the role. Pop star Leee John replaced David Rhule as Wrack's first mate, Mansell. John is supposed to have been told by a fortune teller that he would appear in Doctor Who. Enlightenment took the slot that should have gone to Eric Saward's Dalek story and became the last story of the season to be recorded, once a remount for Terminus was out of the way. 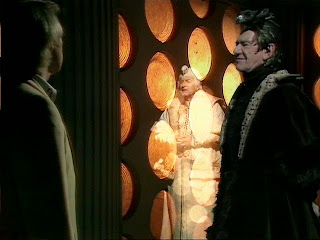 Two other cast members worth mentioning are Christopher Brown as the love-struck Eternal Marriner, and Tony Caunter making his third Who appearance as crewman Jackson.
And of course, Cyril Luckham returns as the White Guardian - last seen in this role in the opening episode of The Ribos Operation. Sadly, this was Valentine Dyall's final appearance as the Black Guardian. He died in 1985, Luckham in 1989.
Episode endings are: 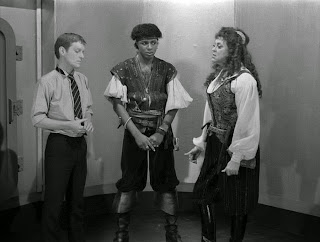 Overall, a very good story with some fine performances and some wonderful imagery. The first cliffhanger is often cited in top ten lists for the classic series.
Things you might like to know:
Posted by GerryD at 23:53