Know Your Cybermen No.8 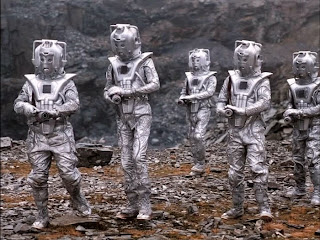 The Five Doctors (1983).
A brief one this. Only the second outing for the new Cyberman costumes, and already there is a (slight) bit of a design alteration. The "moon boots" of Earthshock had not been very popular, so the footwear is changed to proper boots. Other than that, these Cybermen are the same as those seen in the previous story.
No Cyberman plan as such this time, as these ones have been kidnapped from their proper time / place by Borusa and deposited in the Death Zone on Gallifrey, using the Time Scoop. It is the Time Lord President who has the convoluted scheme on this occasion. He wants the Doctor to deactivate the defences of the Dark Tower so that he can go there and claim immortality, yet puts lots of barriers in his way - such as a large number of Cybermen. He even gives them a means of tracking down the Doctor - using a homing device hidden in the recall device given to the Master.
One group of Cybermen is destroyed when it stumbles across the Raston Warrior Robot. A second batch, including one of the two Cyber-Leaders we see, is tricked into walking across a booby-trapped floor within the Tower. A third group attempt to blow up the TARDIS with a massive bomb.
One thing to note. Up to this point, the Cybermen have always been uniformly tall. There are a couple of noticeably shorter ones on view here. This would make sense if individuals are "upgraded" a bit at a time. Cyber spare parts are not all of a uniform size, apart from the head / shoulder sections. 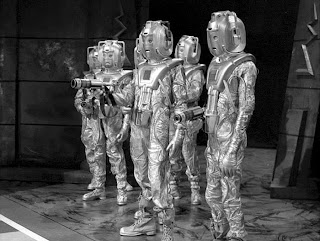