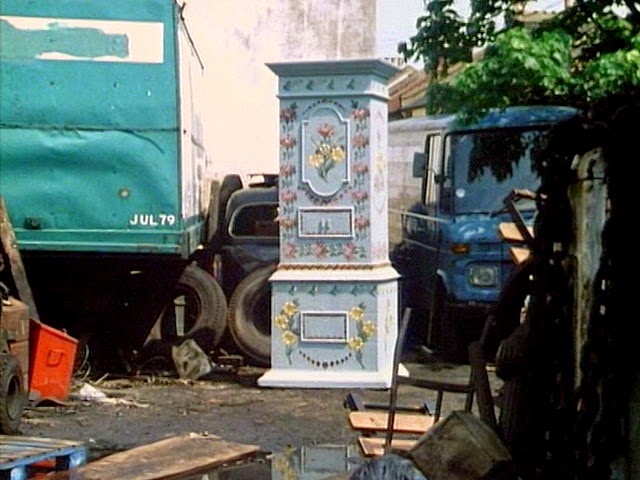 Season 22 is Colin Baker's first full year in the role. At his unveiling to the press, his producer JNT hinted that the TARDIS might not be staying in the form of a Police Box for very much longer...

Journey 342: Jaconda, 2200, to London, 1985.
As mentioned before, there is an unseen journey after the previous story, when the Doctor takes the Terrible Twins home. The ship materialises in a familiar location - the junkyard at 76 Totters Lane, Shoreditch, London, which is where we first encountered it back in 1963. The Doctor has been trying to fix the Chameleon Circuit. The ship materialises in the form of a wooden cabinet, ornately decorated with painted flowers. The entrance is at the rear. 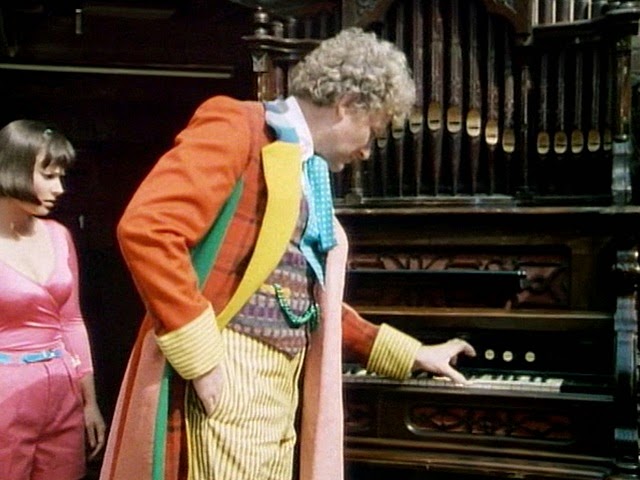 Journey 343: Totters Lane to garage, elsewhere in London, 1985.
Trying to trace what he thinks is a stranded alien, the Doctor follows its signals to a garage / workshop. This time the ship materialises as a playable organ. Again, the door is at the back. 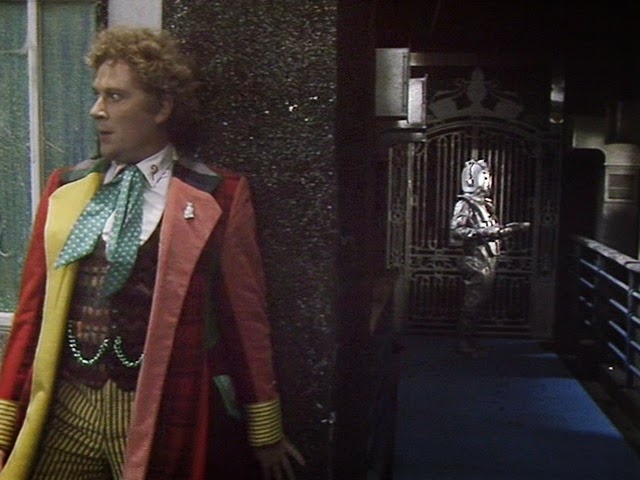 Journey 344: London, Earth, 1985, to Telos, date unknown.
The Cybermen take control of the TARDIS and force the Doctor to take them to their planet, Telos. It materialises in the ice tombs in the form of an ornate gateway. We are sometime in the far future, after the events of Tomb of the Cybermen. They have limited time travel capabilities at this point - making use of stolen technology. 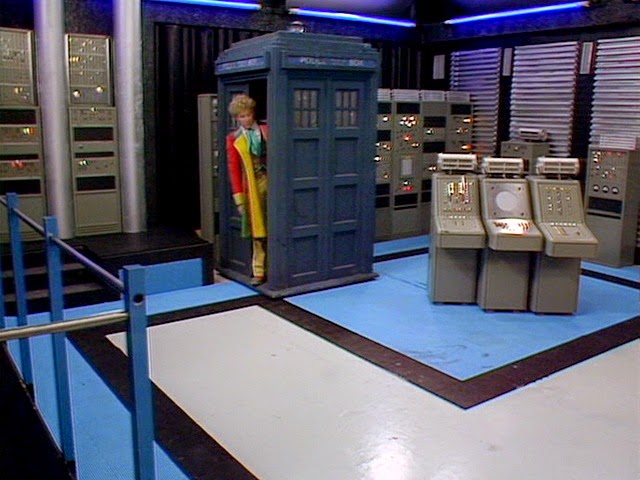 Journey 345: Telos - Ice tombs to Cyber Control, date unknown.
In order to find the mercenary Lytton, the Doctor takes the TARDIS to the Cyber Control centre. It reverts to its familiar Police Box shape, fortunately. 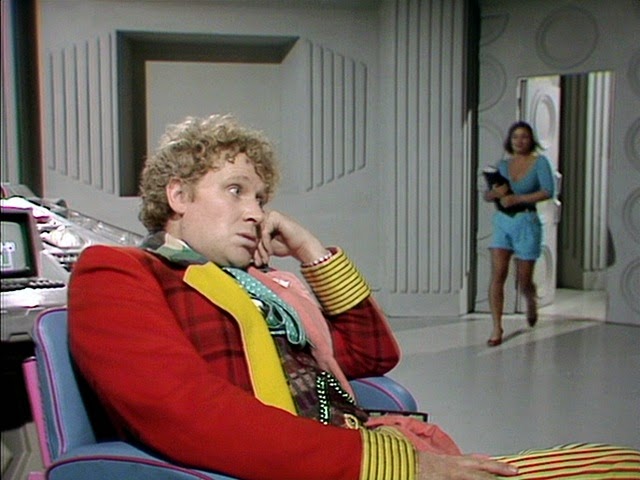 Journey 346: Telos, date unknown, to region of space between Cetes and Scalpor, c.2300.
The TARDIS breaks down in space - the transitional elements no longer generating orbital energy, according to the Doctor, who is quite prepared to simply sit out the remainder of his lifetimes. Peri takes the initiative and fetches the ship's manual, and they realise they have enough residual power to get them to a planet where they can find the mineral Zeiton-7. 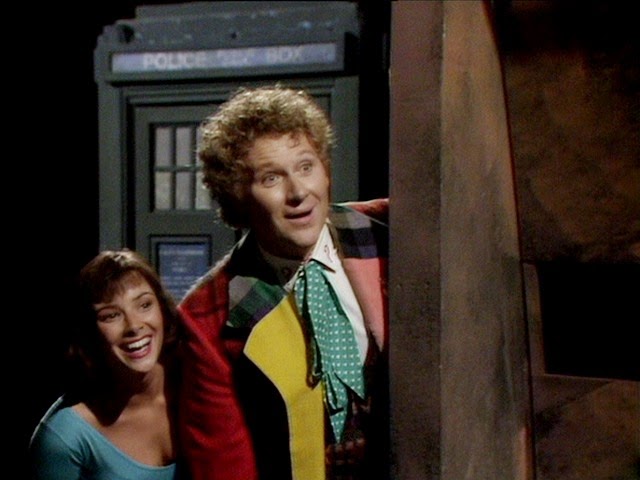 Journey 347: Region of space between Cetes and Scalpor, to Varos, c.2300.
The TARDIS materialises in the Punishment Dome on Varos, which was once a penal world. The ship is later transported to the control room of the complex. Once Sil's plans have been thwarted, the Doctor gets all the Zeiton-7 he needs. 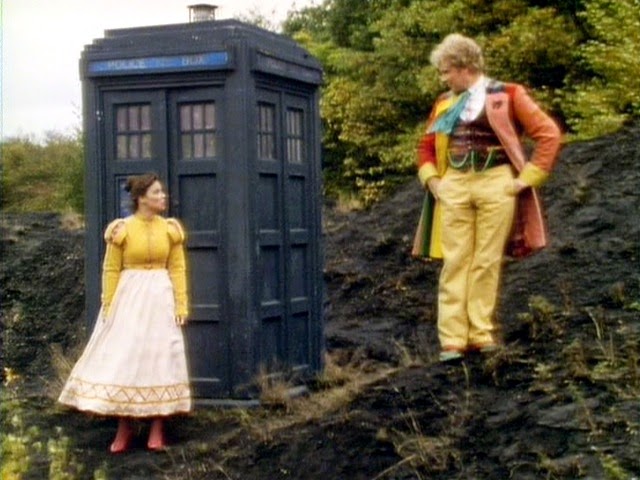 Journey 348: Varos, c.2300, to Killingworth, England, c.1820.
The TARDIS is headed for Kew Gardens when it is drawn off course due to the presence of two other TARDISes in the same area of Northumbria. These belong to the Master and to the Rani. The Master has the miners who have been rendered violent by the Rani's experiments pick up the TARDIS and throw it down a mineshaft.
Journey 349: Killingworth, c.1820, mine tunnels to pit office.
The Doctor moves the TARDIS out of the mine tunnels. 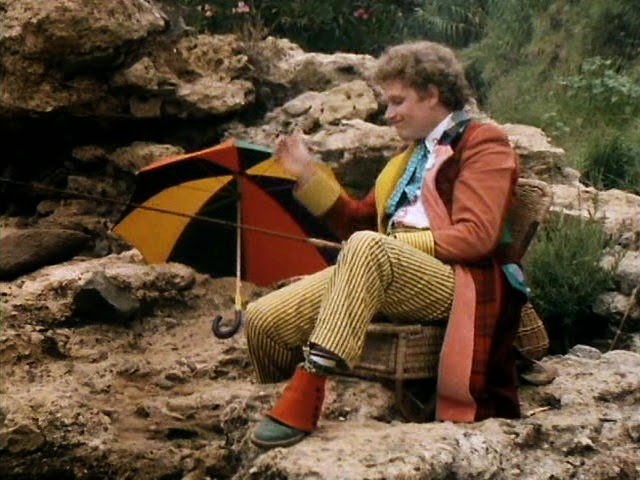 Journey 350: Killingworth, England, c.1820, to unknown planet, date unknown.
The Doctor and Peri travel to an unidentified planet where he indulges in a spot of fishing. 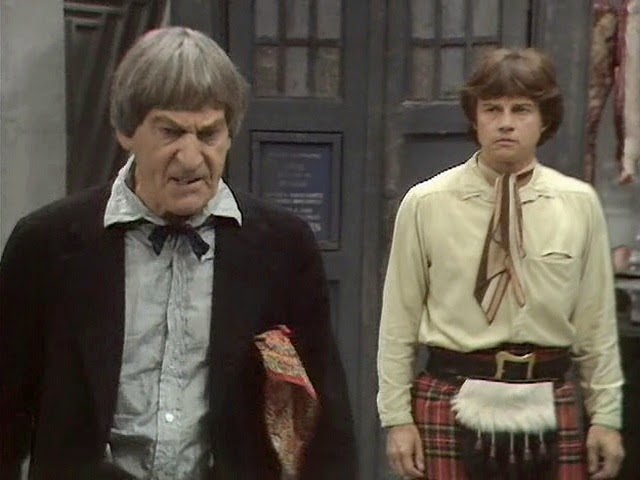 Journey 350(b): Unknown place / time, to Space Station Chimera, 1985.
Things get a bit complicated here, as we also get to see the Second Doctor and Jamie arrive on the space research station where Dastari works. We'll call this 350(b) as this journey may lie in what has become known as Season 6b. It must be 1985, as the whole point of the Sontaran plan is to gain time travel. The Doctor is able to use a Stattenheim Remote Control device to send the ship off the station, to prevent its capture. 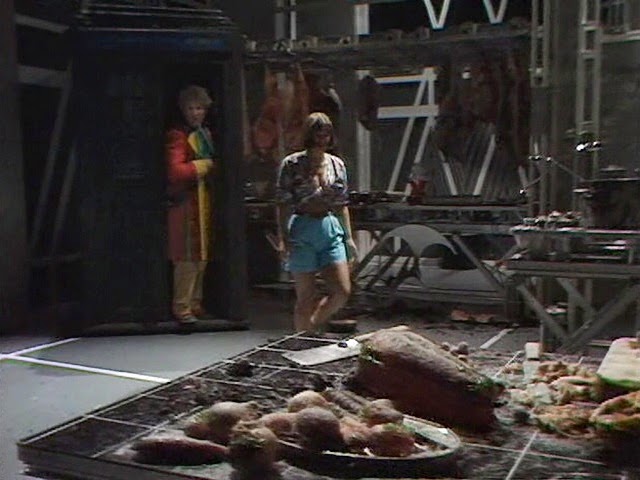 Journey 351: Unidentified planet, date unknown, to Space Station Chimera, 1985.
Experiencing the attack on his former incarnation, the Doctor takes the TARDIS to the research station in the Third Zone to discover what has happened to him. 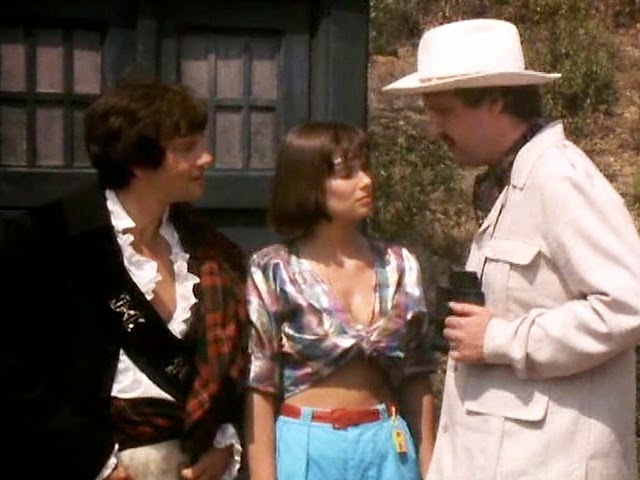 Journey 352: Space Station Chimera, to Seville region, Spain, 1985.
By making mental contact with his earlier self, the Doctor traces him to the countryside outside the Spanish city of Seville. 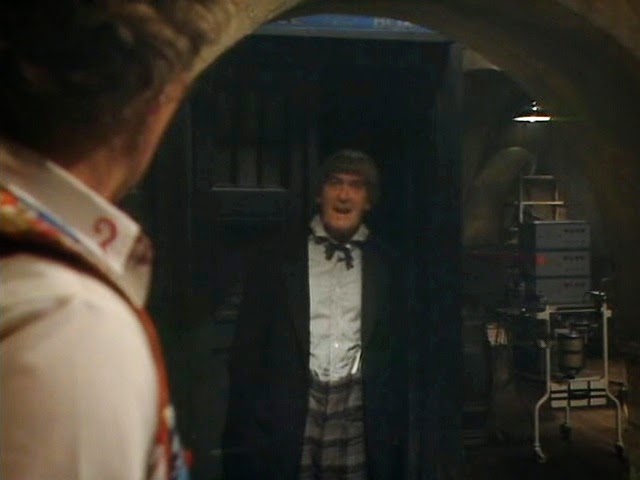 Journey 352(b): Space Station Chimera (near orbit?), to Seville Region, Spain, 1985.
Wherever the Second Doctor parked his TARDIS, it now travels by remote control to the hacienda in Spain. 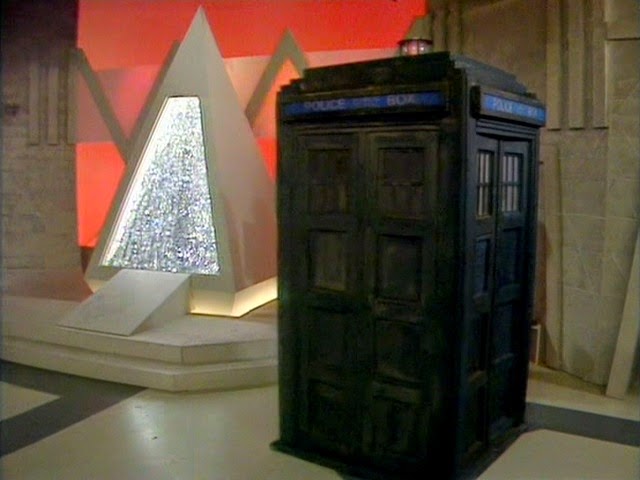 Journey 353: Seville, Spain, 1985, to Karfel, date unknown.
The TARDIS gets caught up in the time tunnel created by the Borad on the planet Karfel, which the Doctor and Jo had visited during his third incarnation. The TARDIS follows the time corridor to its source - the Timelash. Before materialising, the Doctor and Peri see the image of a young woman pass briefly through the console room - someone caught in the tunnel. 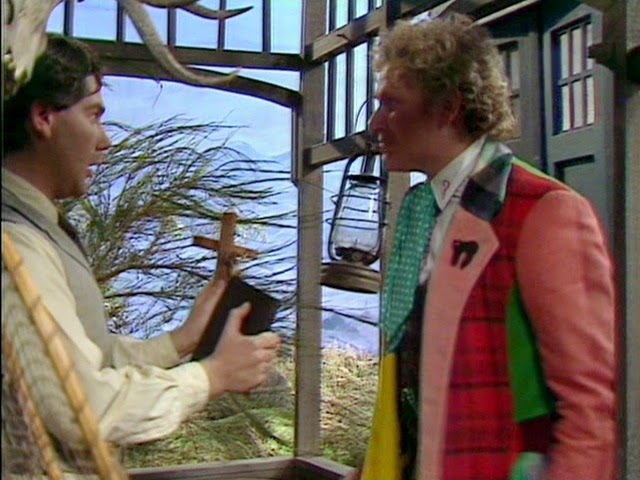 Journey 354: Karfel, date unknown, to Highlands of Scotland, 1885.
The Doctor agrees to travel along the track of the Timelash to rescue Vena, and the valuable power key she was carrying. The ship lands by a cottage in which the young HG Wells is holidaying, not far from Loch Ness. 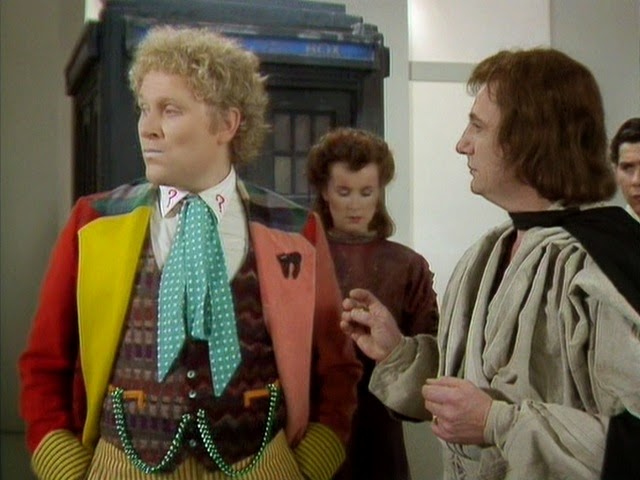 Journey 355: Scotland, 1885, to Karfel, date unknown.
Mission accomplished, the Doctor takes Vena back to Karfel - and young Herbert George has stowed away on board. 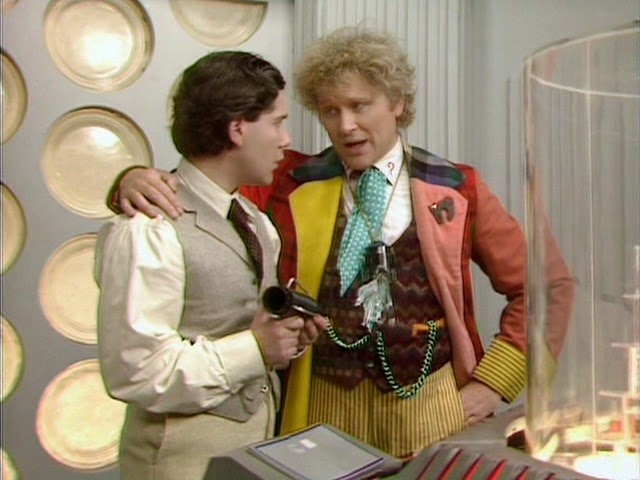 Journey 356 & 357: Karfel back to Karfel, via near orbit.
The Doctor takes the TARDIS into space near Karfel in order to destroy the approaching Bandril missile. The Doctor basically has the TARDIS ram the weapon. There is an unseen journey when the Doctor and Peri take Herbert back to Scotland in 1885. 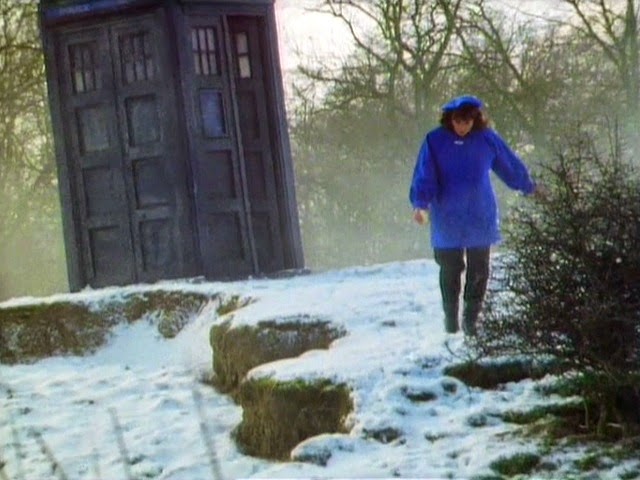 Journey 358: Karfel, date unknown, to Necros, date unknown.
The Doctor has heard that an old friend named Arthur Stengos has died, and so he goes to the Tranquil Repose funerary complex on Necros to pay his last respects. The ship materialises quite a distance from their target destination - deliberately, as the Doctor is suspicious. He's right to be - Davros and the Daleks are here.

Journey 359 should have been Necros, date unknown, to Blackpool, Lancashire, 1986 - but things did not quite go to plan - as you will see when we return for TARDIS Travels No.23...
Posted by GerryD at 20:13