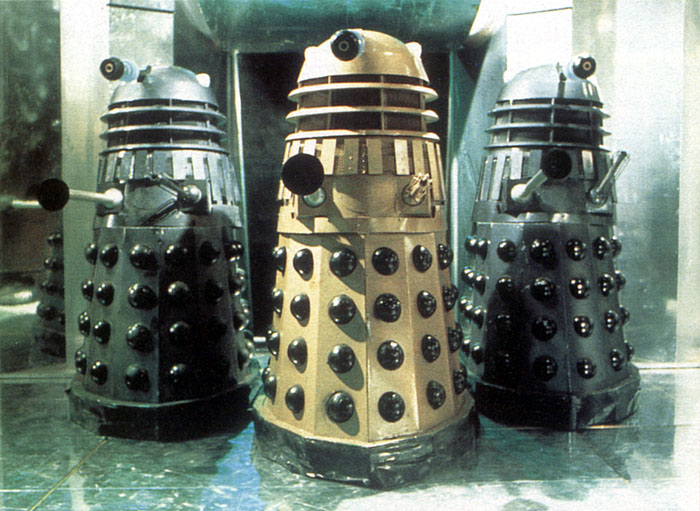 In which UNIT is called in to investigate an apparition at Auderley House. Sir Reginald Styles is preparing to chair a vital peace conference in Peking. He is attacked by a man in combat gear, carrying a futuristic weapon, who vanishes into thin air. He shrugs the incident off, but the Doctor decides that a spot of ghost-hunting is called for - especially when the same man is later found unconscious, and the Doctor deduces the weapon comes from the future. Another group of guerillas break into the house and take the Doctor and Jo captive. They have come to kill Styles - to prevent a future catastrophe. Jo is accidentally thrown forward to the 22nd Century. One of the guerillas goes missing, and the others return to their own time. The Doctor goes with them to retrieve Jo - and just before they operate their time travel device he sees a Dalek. 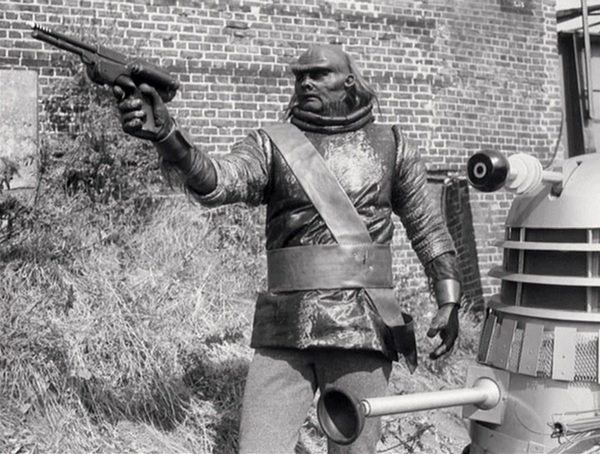 The Doctor finds that the Daleks have invaded the Earth again in this time period and now rule the planet. Humans are treated as slave workers. There is only a small group of Daleks, but they use human agents and a police force of brutal ape-like Ogrons to enslave the population. Jo is unaware of the true nature of this society, being entertained by the Controller of the European Zone, who hopes to learn about the rebel group from her. He and the Daleks know that the guerillas are using stolen time travel technology to try to change history. The Doctor is captured, and the Daleks use a Mind Analysis Machine to identify him as their old enemy. 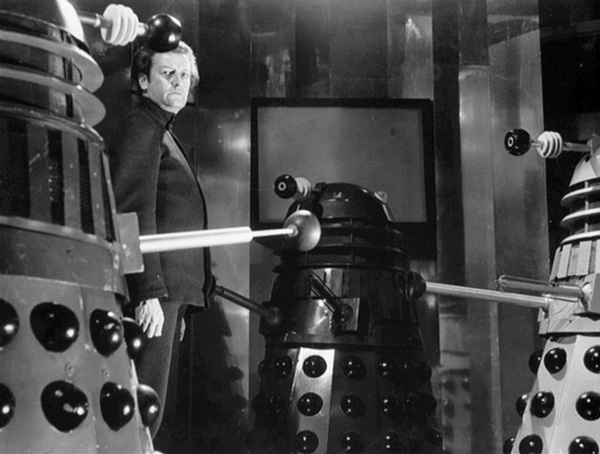 When the rebels learn that the Doctor is regarded as important to the Daleks, they decide to rescue him. They are successful - and the Doctor prevents them killing the Controller. At their base, the Doctor learns of events leading up to the Dalek invasion. Styles is supposed to have gone mad and destroyed the peace conference - leading to a terrible war which weakened the planet enough for the aliens to take over unhindered. The rebels now want the Doctor to go back and assassinate Styles. He learns of the missing guerilla - Shura - and works out what has happened. Shura had explosives with him. He must have completed his mission - blowing up the conference himself. The rebels have trapped themselves in a paradox - inadvertently creating this world themselves. The Doctor and Jo will return to the 20th Century to prevent this. An ambush is set to stop them - but the Controller allows them to escape. This costs him his life. The  Daleks mount an expedition to travel back and ensure the conference is destroyed. The meeting has been rearranged for Auderley House. As the Daleks and Ogrons battle UNIT troops, the Doctor finds the wounded Shura in the basement and tells him what has happened. The house is evacuated and the aliens allowed to enter - and Shura sacrifices himself to blow them up. Seeing what might happen if they fail, Styles and the other delegates commit to settling their differences. 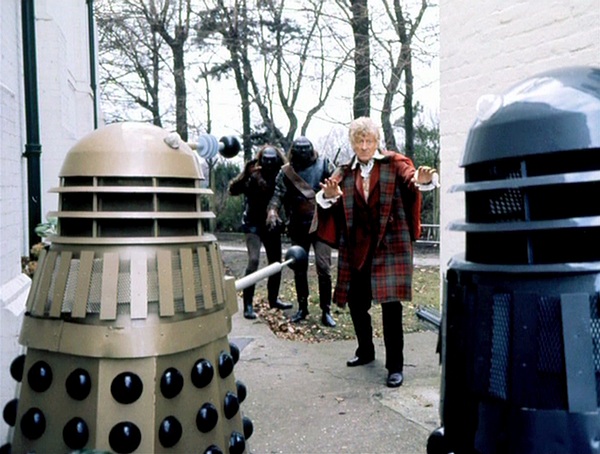 This four part adventure was written by Louis Marks and was broadcast between 1st and 22nd January, 1972. It marks the opening of Season 9, and is most significant for the return of the Daleks after nearly 5 years (save for a couple of cameo appearances). They are also seen in colour for the first time.
After the introduction of the Master to launch the previous season, producer Barry Letts and script editor Terrance Dicks wanted something big to launch this new series. As the Daleks had been off our screens for such a long time, they decided to ask Louis Marks to incorporate them into his tale of guerillas (and gorillas) from the future. Problem was, they forgot to ask Terry Nation... His agent quickly reminded the production team of his co-ownership role.
Nation had been trying to sell the idea of a Doctor-less Dalek series to US television and his efforts had come to nothing - so a few glasses of champagne over lunch at Pinewood Studios led to him giving his consent to use them. Indeed, he got a hankering to write for the programme again himself, and it was agreed that he would have first refusal on the next Dalek script.
That's the story according to Mr. Dicks. Barry Letts is on record as having disagreed and said that things had been arranged with Nation and his agent in advance - yet on more than one DVD commentary Letts agrees with Dicks. Dicks has the best story (including Sean Connery and his then wife, Diane Cilento, sitting at the next table) so - as the old adage goes - never let the truth get in the way of a good story. I'll therefore go with him.
Marks' core story - of a rebel group attempting to change the future only to find they had created that future themselves - a temporal paradox - is one of the very rare occasions when the programme about a time traveller had actually used time travel as a key element of the plot. 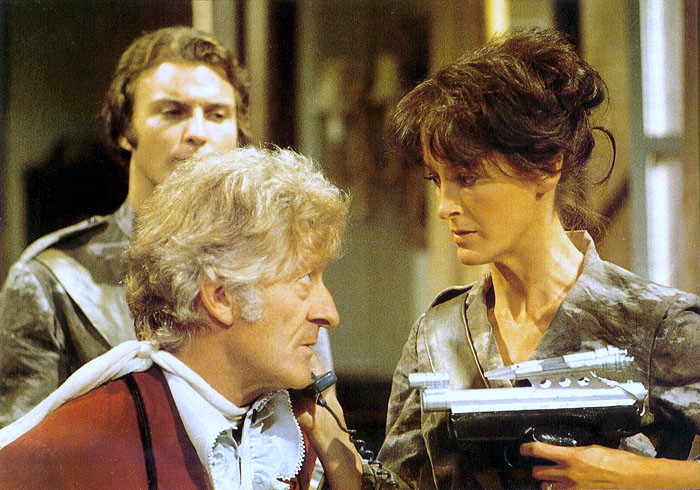 For such a significant story, Day of the Daleks is deeply flawed - and a lot of this is down to its pedestrian direction and editing. Director Paul Bernard proves to be one of the less inspired choices from Mr. Letts, and I'm surprised he was used again. An entire scene is omitted which makes an earlier one redundant. The Doctor and Jo are in the UNIT lab when they see themselves at the door. This was supposed to be explained by the Doctor and Jo at the end of the story arriving back to see their earlier selves in the lab. The latter scene was never filmed. There are only three Dalek props - a gold leader and two grey ones - and when they attack the house at the conclusion this fact is painfully apparent. Each recap of the cliffhangers is lifted entirely from the previous episode - to the point where we even get the musical sting.
The Dal-eks talk ex-treme-ly slow-ly, lab-ou-ring ov-er ev-er-y syll-a-ble.
The only guest artist really worth a mention is Aubrey Woods as the Controller. He's a traitor who eventually finds redemption thanks to the Doctor waking him up to himself and later saving his life. Rebel Anat - Anna Barry - is also very good.
Episode endings for this story are: 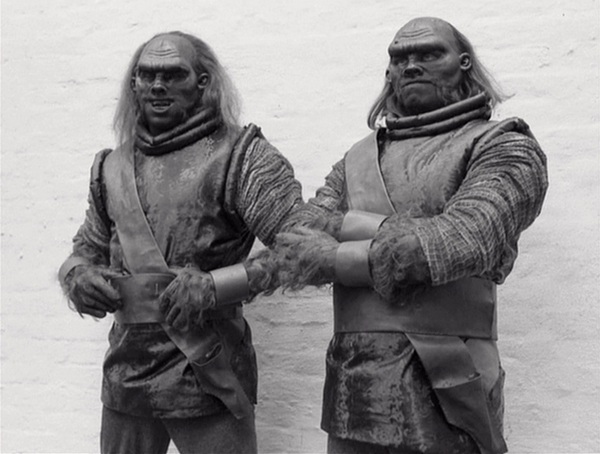 Overall, the weakest of all the Dalek stories, I'm afraid. After their lengthy absence we deserved better. The introduction of the Ogrons - masks designed by John Friedlander - is welcome. The original Dalek-free version might just have become widely regarded as a gritty stand-alone adventure.
Things you might like to know:
Posted by GerryD at 00:11