Story 53 - The Ambassadors of Death 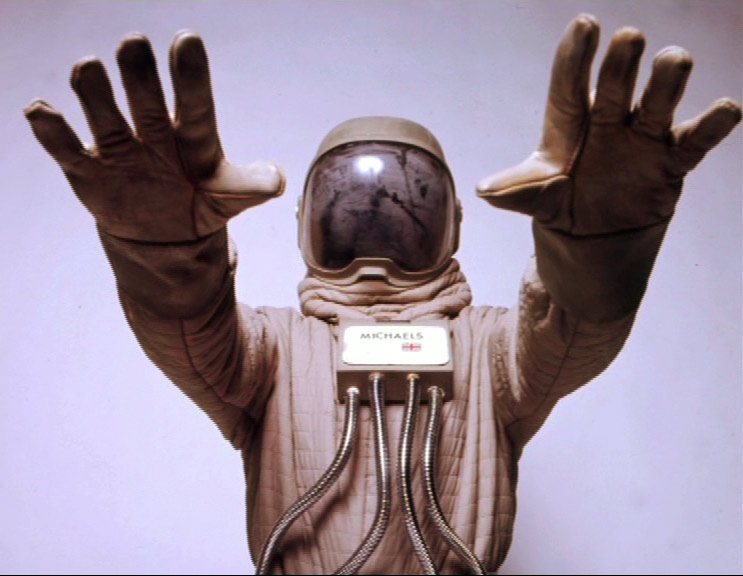 In which UNIT are providing security at the UK Space Agency. Recovery 7 is about to dock with Mars Probe 7 which left the red planet some time ago. Communications with the Probe were lost and it is not known if the two man crew are sill alive. When the Recovery vessel docks, a strange sound is heard at Mission Control. In charge here is Ralph Cornish. The Doctor identifies the sound as a message, and predicts there will be a response. Sure enough, a similar sound is broadcast from Earth, and this is traced to a warehouse just outside London. The Brigadier and his men go there and a battle ensues. A man named Collinson is arrested, and he proves to be a soldier, secretly working under the command of General Carrington - military attaché to the Space Agency. Carrington was an astronaut himself - on the previous Probe mission to Mars, when his colleague died under mysterious circumstances. The Recovery 7 returns to Earth, and now communications have been lost with it as well. A group of armed men try to steal the capsule as it is transported to the Space Centre, but the Doctor is ale to hijack it back. When the capsule is opened, it is found to be empty. 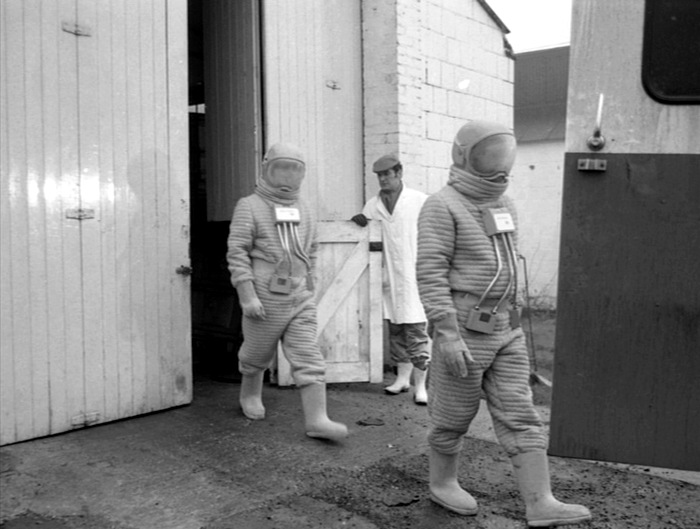 The Doctor's attempts to decipher the strange sound are hampered by the actions of the computer expert Bruno Taltalian. He is working with a criminal named Reegan, who is also in the employ of Carrington. The three astronauts from the Recovery 7 were snatched from the Space Centre during a faked security drill. When it looks as if the Doctor and UNIT might track them down, Reegan kills the scientists looking after them and moves them to a secret location - a bunker on army land. Carrington claims that the astronauts have been infected with a contagious form of lethal radiation. Reegan sends Taltalian to the Space Centre with a bomb, intended to kill both him and the Doctor. Only the scientist is killed. Liz is then kidnapped to stop the Doctor interfering. An alien communications device is found amongst Taltalian's effects, and the Doctor works out that the strange sound heard earlier is actually the instructions on how to build a more advanced model. 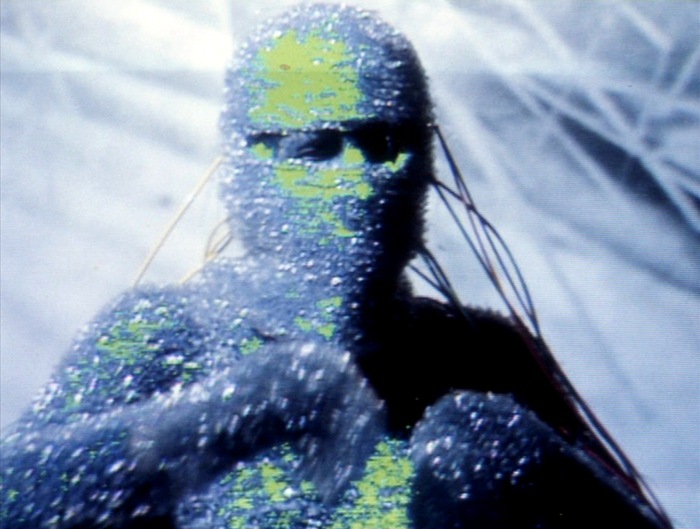 The Doctor decides to make a solo flight in the Recovery 7 to try to find out what happened out in space. Reegan tries to sabotage the launch but fails. The Doctor travels to the Probe 7, and encounters a huge alien spaceship. The three astronauts are here, unharmed  and unaware of what has happened to them. The alien captain tells the Doctor that three ambassadors were sent back to Earth in their place. If they are not returned unharmed, there will be war. On returning to Earth, Reegan abducts the Doctor. It transpires that Carrington had encountered the aliens on his earlier mission. They accidentally killed his colleague as they are highly radioactive - deadly to the touch. He has grown increasingly bitter ever since and now plans to trigger a war to destroy them. He will unmask one of the aliens in a live TV broadcast. Reegan uses the astronauts to raid a number of scientific establishments in order to steal isotopes for their survival. He plans to use them in other criminal schemes. The Brigadier rescues the Doctor and Liz, and Reegan is arrested. Carrington is stopped before the broadcast can take place. Cornish is left to arrange the handover between the aliens and his astronauts. The aliens decide the time is not yet right to forge diplomatic relations. 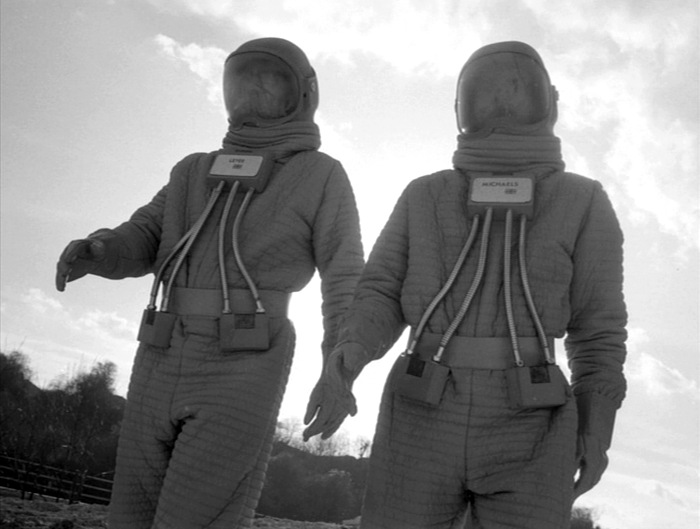 This seven part adventure was written by David Whitaker, and was broadcast between 21st March and 2nd May, 1970. Whilst Whitaker got the credit, there is very little of his work on screen. After numerous re-writes, he was paid off and the actual scripts were completed by Trevor Ray (part one) and Malcolm Hulke (parts two to seven), with a lot of input from Terrance Dicks.
The Ambassadors of Death does not always feel like a Doctor Who story. Steven Moffat has said that the first episode of Series 7 Part 2 will be a bit "urban thriller", but this beats him to it by 43 years. Imagine an episode of The Sweeney or The Professionals - but with radioactive aliens. If the astronauts really were irradiated humans, this could easily be an episode of Emma Peel era The Avengers. The story marks the first full use of Derek Ware's HAVOC stunt team. There are two big set pieces - the battle in the warehouse, and the hijacking of the Recovery 7 convoy, involving motorbikes and a helicopter. Two other stunt sequences are Liz's chase over a raging weir, and the Brigadier's rescue of the Doctor and Liz from the bunker. Producer Barry Letts allowed director Michael Ferguson to to his own thing - only to regret the hole in the budget which ensued.  A contemporary, 7 episode length helped considerably to balance the books. 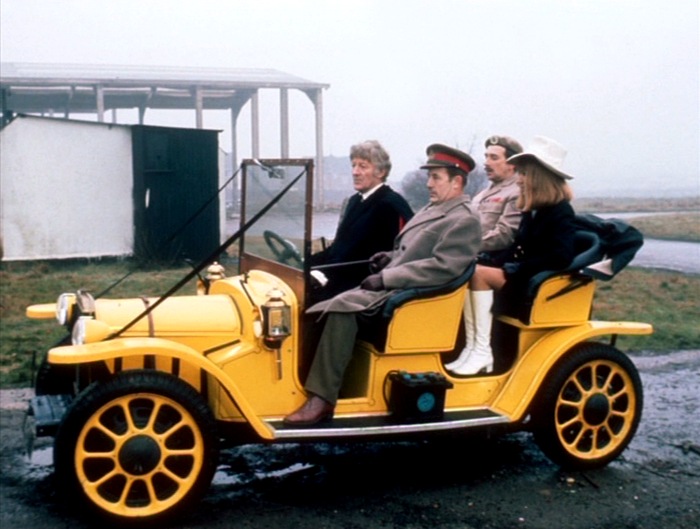 In the same way that the previous story had introduced a plague sub-plot part way through, this story has the Doctor take a detour off into space by conventional means in order to sustain audience interest. The alien captain is voiced by Peter  Halliday. He is only glimpsed, gesticulating wildly, behind a CSO venetian blind. We only get the briefest of glimpses of the astronauts' true form.
The Doctor, Liz and the Brigadier are all given loads to do in this - one of the few times they will get such an even share of the action. The Doctor demonstrates a new skill in managing to make a huge tape reel disappear as tough by magic. Liz again gets to be a scientist and not just a conventional companion figure. The Brigadier is not yet stuck behind a desk at UNIT HQ, being fully involved in three of the action set pieces. It is one of the best Brigadier stories there is.
Guest artists include John Abineri as the quietly insane General Carrington, driven mad by his experiences on a previous space mission. He is xenophobic, and fully believes that what he is doing is the right thing. You almost feel sorry for him at the end. Ralph Cornish is played by Ronald Allen (last seen in The Dominators). This could have been a thankless role, but he proves to be a determined, strong-willed character who is prepared to flaunt authority. Reegan is William Dysart who had appeared in The Highlanders. A ruthless mercenary, who does not share any of the General's ideals, and who sees the base criminal opportunities offered by the aliens, he makes for a charming villain. Shame we never got to see him again. Cyril Shapps plays the discredited scientist Lennox, Robert Cawdron iz ze variably awcented Taltalian, and this story sees the return of John Levene's Benton - now Sergeant for the first time. 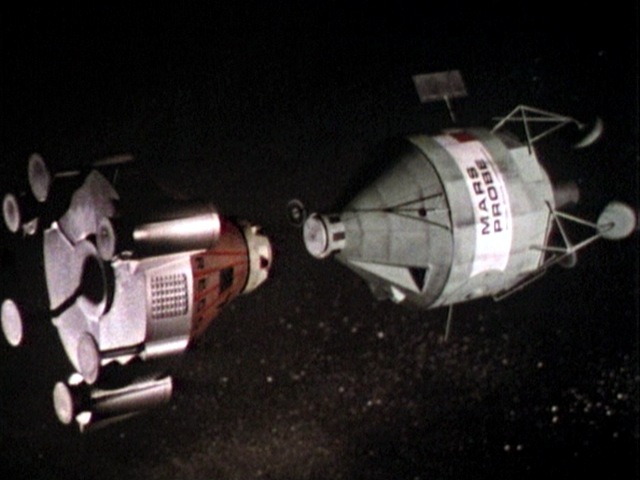 Special mention must be made of the model shots in this story. They are superb, accompanied by haunting Procul Harum-like music. The alien craft is a huge organic creation.
Also worth noting is the fact that we see the TARDIS control console outside the ship. It is able to send the Doctor and Liz a few seconds into the future.
Episode endings for this story are: 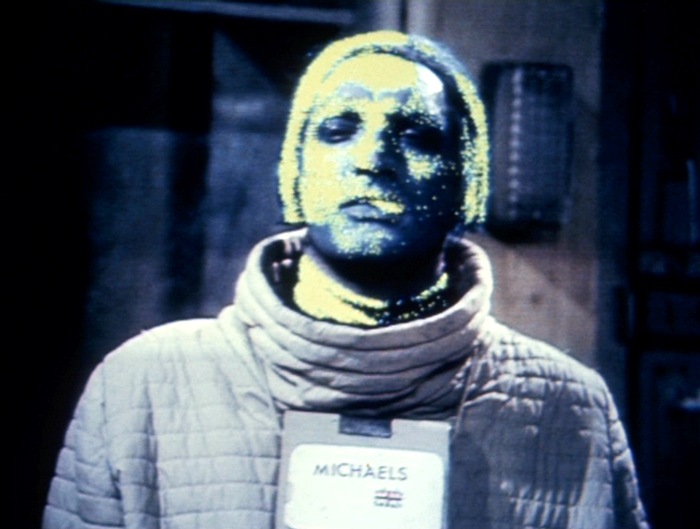 Overall, a strong, adult storyline. Low key monsters who prove not to be monsters at all, and great special effects. The 7 part length does not prove a handicap thanks to the performances of regulars and guests alike.
Things you might like to know: 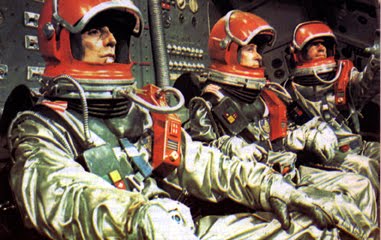