Not a lot about the new series in the latest edition of DWM. Two more guest starts announced (for episode 4). Steven Berkoff and Jemma Redgrave.The latter is playing a character called Kate Stewart, which happens to also be the name of the Brigadier's daughter in some of the DW spin-off works.Coincidence? Apparently episode 4 features UNIT, so who knows.

The episode currently being filmed is not the Christmas special (apparently that is still being written). It is one of the 2013 episodes and is written by newcomer to the series Neil Cross.
There are a whole load of filming pictures on the SFX website, which are safe to view as they're non-spoilerific. They do show the Doctor in a different costume, the companion in contemporary dress, and some extras in Victorian garb.
I rather like the Doctor's new look. Will it be a new regular outfit, or is it just for this one episode? 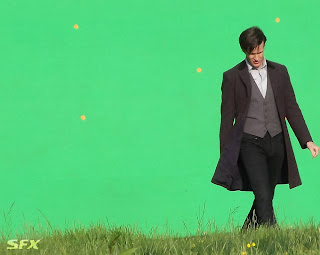 Lastly, the season poll in DWM made interesting reading. Moffat's principal story arc episodes did very well, though top spot went to The Doctor's Wife. Curse of the Black Spot finished last. Mark Gatiss' Night Terrors was not highly regarded. He hasn't really had a hit since his first one - The Unquiet Dead. The Idiot's Lantern was second weakest of series 2, and the controversial Dalek redesign did not help Victory of the Daleks.
Posted by GerryD at 11:10