The Ponds have left the building... 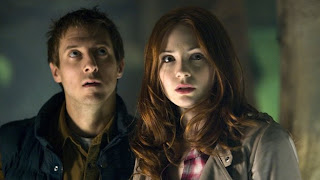 According to their own Tweets, Arthur Darvill & Karen Gillan have filmed for the last time on Doctor Who. Whilst they remain Rory and Amy in our heads until September / October, the actors themselves are moving on to pastures new (after a long  holiday no doubt).
Amy will have been the longest running (continuous) companion since the series returned in 2005. There will be a bit of debate about when Rory actually became a companion. I'm personally going to opt right from The Eleventh Hour as his story arc begins there, though most will only go from Vampires of Venice or even from The Big Bang.
I'm sure we will see them very much involved in the promotion of the new series come the Autumn (work commitments allowing).
I am particularly interested to see what Mr.Darvill gets up to next, as he has his musical interests as well as his acting ones - both writing and performing.
It is well known he once fronted a band called Edmund (check them out on You Tube. I don't believe they ever released anything).
I was lucky enough to see him (musically) in action twice last October - duelling lutes with Paul Hilton in the final performance of Dr Faustus at the Globe, and performing in the amazing 66 Books at the Bush Theatre (picture courtesy of rorys-revellers blog site)... 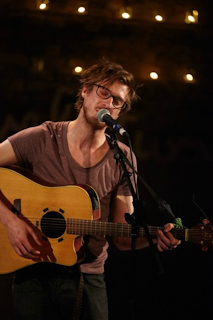 I wish them both the very best of luck in their on-going careers.
Posted by GerryD at 13:45