The Faceless Ones - Animated 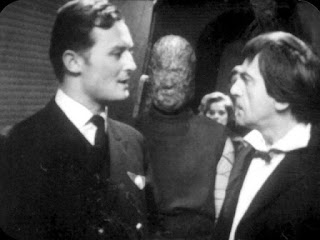 It has been announced that the next "lost" Doctor Who story to get the animated treatment is to be The Faceless Ones, which first aired over six weeks in April / May 1967. This was broadcast immediately after the last one to be animated - The Macra Terror - and was the last story to feature companions Ben and Polly.
Unlike The Macra Terror, The Faceless Ones has two episodes intact in the archives, which were released on DVD as part of the "Lost in Time" box set many years ago. These episodes will be on the new release, but as extras, as Parts One and Three are also going to be animated - making a change from previous releases of partial stories where only the missing episodes were animated (i.e. The Reign of Terror, The Tenth Planet, The Moonbase, The Ice Warriors).
This is to be welcomed, as the animated episodes of The Faceless Ones are to be presented in colour, and it has always been somewhat jarring to switch from the animated parts to the live action ones.
This should make a future Season 4 Blu-ray box set much more appealing to buyers, as it is one of the seasons with the fewest existing episodes.
No release date has been set, other than that it won't be coming out until next year - presumably late February / early March.
Posted by GerryD at 21:44