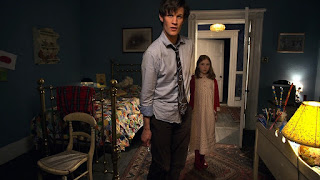 In which the TARDIS hurtles out of control across the skies over England, with the newly regenerated Doctor on board - just. In the village of Leadworth, near Gloucester, a girl named Amelia Pond is praying to Santa for someone to come and fix the crack in her bedroom wall. She hears strange sounds coming from it, and it looks like a huge crooked smile. A noise from the garden sends her hurrying outside, where she finds the TARDIS crash-landed - demolishing the shed. She assumes that the Doctor has been sent to help and so invites him inside. She reveals that she lives with her aunt, who has left her home alone for the night. The Doctor is hungry, but nothing seems to satisfy until he has had fish-fingers with custard. He then goes to look at the crack. Examining it, the Doctor realises that it is no ordinary crack. It exists independently of the wall - a breach in the universe. He uses his sonic screwdriver to open it a little, and they hear a voice booming out that "Prisoner Zero has escaped", then a huge eyeball appears and examines them. The crack closes but before the Doctor can do anything else he hears an alarm from the TARDIS. He tells Amelia that he will be back in a few minutes as he needs to dematerialise the ship to stop the engines self-destructing. However, when he returns, he finds that it is now broad daylight. He has worked out that beyond the crack lies an alien prison, and the mysterious Prisoner Zero may well have escaped into Amelia's home. He goes upstairs and discovers a room on the landing which has been protected by a perception filter, rendering it almost invisible. He is suddenly knocked unconscious, and wakes handcuffed to a radiator and confronted by a WPC. His sonic had rolled under the door of the strange room when she hit him. He demands to know what has happened to Amelia, whilst the WPC's attention is drawn to the door, which she can now see. She goes inside and tells the Doctor that his sonic is on top of a table - suggesting that the room must be occupied. The Doctor warns the officer to check her peripheral vision - and she sees a large serpentine creature with massive fangs. 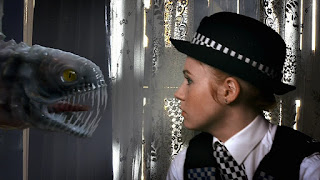 The Doctor manages to free himself as the WPC runs out, and both see the door open to reveal a man with a dog. Both move in unison, and both have huge fangs. The Doctor realises that this is the alien, able to mimic other lifeforms - even multiple ones. They run outside where the WPC reveals that she is Amelia Pond, now grown up and known as Amy. The Doctor is many years late in returning. She isn't a police officer but a kissogram. Although he has only just met her, the Doctor has unwittingly made a significant impact on Amy's life, as no-one would believe her stories of the "raggedy Doctor" and his Police Box - believing he was some sort of child's imaginary friend. Elsewhere in Leadworth, at the local hospital, a nurse named Rory Williams has been helping to care for a number of patients who have inexplicably fallen into deep comas. The problem is that Rory has seen all of the patients walking around the village, and his superiors don't believe him. He is told to take a holiday. The Doctor and Amy go into the village where they discover that every loudspeaker, TV and radio is broadcasting the message that Prisoner Zero has escaped. A huge crystalline spaceship with a giant eyeball at its centre appears over the village and scans the area, and the sky darkens slightly as a forcefield is placed over them. The Doctor notices that Rory is the only person not looking up - he is taking a photo of the man with the dog, who ought to be in the hospital. Amy tells the Doctor that Rory is her boyfriend, which he corrects to fiance. 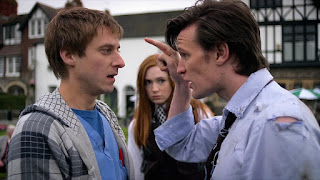 The Doctor discovers that the spaceship belongs to the Atraxi - the people who run the prison beyond the crack in Amy's wall. They have traced Prisoner Zero here, and plan to incinerate the entire planet to destroy it. However, the escaped convict is able to disguise itself, so can't be found by the Atraxi. The Doctor has to find a way of drawing their attention to the creature so that it can be arrested without harm coming to the planet. He uses the laptop of one of Amy's neighbours to make contact with a panel of experts who have come together to study the alien threat and comes up with a plan. He then sends Amy and Rory to the hospital to evacuate it, as this seems to have a link to Prisoner Zero. All the comatose people are in this state in order for Prisoner Zero to replicate them. Amy and Rory are confronted by a woman with two girls who all have huge fangs - another multiple form for Prisoner Zero. The Doctor's plan was for every clock on Earth to reset to zero, to attract the Atraxi's attention. Prisoner Zero explains that it will be killed if recaptured as it has escaped before. It even copies the Doctor and young Amelia before attacking Amy and trying to duplicate her, as it has had years to get to know her. However, the Doctor is able to get Amy to remember it in its original form as the Atraxi scan the hospital, and it is found. before it can be transported away it makes a cryptic remark about silence falling and something called the Pandorica...
The Doctor, much to Rory's consternation, then summons the Atraxi back. Helping himself to some new clothes, he goes to the roof and orders the Atraxi to scan their records for information about him. He tells them that the Earth is defended. Seeing how he has defeated many alien menaces, they flee back into space.
The Doctor discovers that the TARDIS has repaired itself, with a whole new console room. He takes it for a quick test run before returning to see Amy. However, it is now night, and he discovers that six months have passed. Despite being in her nightdress, Amy accepts a trip in the TARDIS - even though she is due to be married the following day... 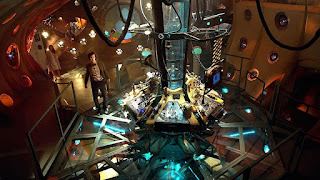 The Eleventh Hour was written by new showrunner Steven Moffat, and was first broadcast on 3rd April 2010. It was all change for the series. As well as Moffat taking over, it saw the arrival of new executive producers Piers Wenger and Beth Willis. It marks the debut of the 11th incarnation of the Doctor - Matt Smith. Apart from the two relaunches for the series - the 1996 Movie and 2005's Rose - this is the first time since Spearhead from Space in January 1970 where there had been so little continuity with the previous season, and even that had featured the already established character of the Brigadier. There are no companions to bridge the regeneration, as we are introduced to Amy Pond (Karen Gillan) and companion-to-be Rory Williams (Arthur Darvill). Even the music has changed since the RTD era, with a new arrangement of the theme courtesy of Murray Gold, and we have a new logo to go with it as well. The TARDIS is supposed to be travelling through the same Space Time Vortex it has always passed through, but now it looks like a tunnel of storm clouds, with lightning bolts striking the ship.
The TARDIS is redesigned inside and out. The Police Box shell is a darker shade of blue, and the St John's Ambulance Maltese cross badge is back - last seen back in the Hartnell era. Moffat was inspired particularly by the TARDIS as it had appeared in the two Peter Cushing Dalek movies for the new look. The interior is more brass and copper than coral, with the console now on a raised, glass floored dais.
The old sonic screwdriver was destroyed when the Doctor tried to attract the Atraxi, and the ship produces a new one for him, which has a green light instead of a blue one.
The setting for the story is a small English village, whereas the Russell T Davies era had featured London-based companions and their families, and many of his contemporary stories were set in the capital. The new Doctor will rarely visit London, apart from a few historical stories. 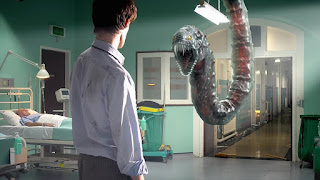 Smith wears a roughed up version of his predecessor's outfit for most of the story - only picking up some new clothes towards the end. These include a tweed jacket and a bow-tie. This was likely a nod back to both Pertwee's first story and the Paul McGann Movie, as the Third and Eighth Doctors also "borrowed" their outfits from hospital locker rooms.
A new story arc is introduced and, little did we know it at the time, this one will run throughout the 11th Doctor's entire tenure - some elements only being explained in his final story.
There is the crooked smile crack in the wall which is really a crack in the universe, and Prisoner Zero tells the Doctor that "Silence will fall" and mentions the Pandorica.
The guest cast is a relatively small one. One person of note is Olivia Coleman, who plays the woman with the two girls. She was already fairly well known to UK audiences at the time, but has gone on to achieve international fame - even bagging an Oscar in 2019. Her name was bandied about as a potential Thirteenth Doctor. Doctor Who fans will be pleased to see Arthur Cox as one of the villagers - Mr Henderson, whose car door Amy traps the Doctor's tie in. He portrayed Cully in The Dominators back in 1968. 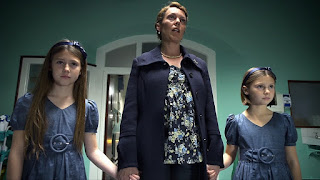 There is a cameo for TV astronomer Sir Patrick Moore, as one of the experts gathered on-line who help the Doctor. The young man (Jeff) whose laptop the Doctor borrows is played by Tom Hopper. Soon afterwards he would take up a regular role in the BBC TV series Merlin (as Sir Percival), as well as appearing in Game of Thrones (as Dickon Tarly). More recently he's been in The Umbrella Academy. Jeff's grandmother is played by Annette Crosbie - probably best known for playing Victor Meldrew's long-suffering wife in BBC sitcom One Foot in the Grave. Rory's boss in Nina Wadia, whilst the young Amelia Pond is played by Caitlin Blackwood - who is, of course, Karen Gillan's cousin. Despite being relations, the pair had never actually met. Overall, it is a very good start to the new era. Worries about Smith's youth prove unfounded, as he carries off the "old man in a young man's body" well. As he says in the dialogue, he is still cooking, but there are glimpses of the clumsy and childlike character we'll come to love. At this early stage, the future bodes well.
Things you might like to know:

Email ThisBlogThis!Share to TwitterShare to FacebookShare to Pinterest
Labels: Series 5