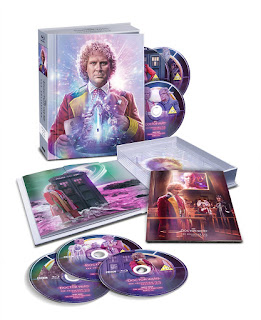 Following the July release of Season 10 on Blu-ray, the next box-set to be announced will be Season 23 - The Trial of a Time Lord season - which is due on 23rd September in the UK.
Everyone had been expecting a McCoy season to be next.
Amongst the extras announced so far we will be getting Terror of the Vervoids with new optional CGI effects; an in-depth interview by Matthew Sweet with Bonnie Langford; and two line-ups on the "Behind the Sofa" segments - Colin Baker joins Nicola Bryant and Bonnie, and Mark Strickson will be accompanied by Frazer Hines and Matthew Waterhouse for a more neutral view of the season.
There will be another "Writers Room" piece, this time looking at the stories which didn't get made for the season. Participants include Christopher Hamilton Bidmead, Eric Saward, Philip Martin and Wally K Daly. Colin Baker will be having some friends round to dinner and, in a related piece, some of the cast will be cooking up their chosen recipes from the 1985 Doctor Who Cookbook.
The listings say there are 6 discs, despite there only being four stories (technically it's one long story, but you know what I mean) - which makes for 2 discs of extras.
I've already pre-ordered my copy from zoom.co.uk. I've gotten all these box-sets from them as they have been cheaper than that company named after a South American river - as well as faster at delivery. I got the Season 18 box-set four days before its release date, whilst another pre-order from that other company didn't arrive until the day after the release date.
Not the best season of Doctor Who by a long way, but it does have its moments. The behind-the-scenes stories are far more interesting than most of what we got on screen.
Posted by GerryD at 20:19