The Tsuranga Conundrum - A Review 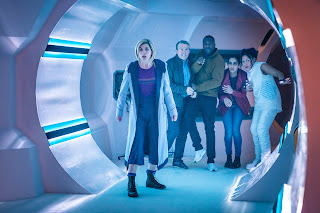 The Tsuranga Conundrum began with the Doctor and her companions rooting trough garbage on a rubbish-tip asteroid. If it was rubbish they were looking for, then they only had to wait a few minutes for this episode to really get going.
I thought this episode was terrible. The best bits were the scenes with the Doctor and the senior medic Astos, as she tried to take over the spaceship whilst he tried to get her to think about the other patients on board. And then they killed him off after 10 minutes.
We were left with a bunch of under-developed characters instead. Vast swathes of dialogue were info-dump or techno-babble, and did the Doctor really waste several minutes giving us a lecture on anti-matter and protons? Yaz has been asked to defend the engine - did she really need to be told how it worked to do this?
Biggest waste of space was the android character. He really had no function in the plot at all. We were told that he would be immune to the touch of the alien - but this was never followed up. Yaz simply wrapped it in a blanket and kicked it a few yards down a corridor.
There was not enough incident, and there was not enough material to sustain three companions.
Graham and Ryan got pushed into a sub-plot about a pregnant guy, so they could deliver some platitudes about fatherhood. Earlier, Yaz and Ryan stopped in the middle of a corridor - in the middle of an alien attack which is threatening to destroy the spaceship - to have a chat about the death of Ryan's mother. Like you would. 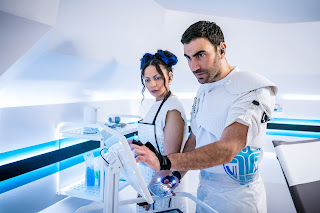 That alien was probably the worst monster the series has delivered. It was described as being the deadliest thing in the universe - but yet again Chibnall tells and does not show. The only threat seemed to come from its inadvertent threat to the structure of the ship. It pretty much ignored the passengers and crew. A bad concept, and it looked stupid as well. I suspect little kids will have liked it, but no-one else.
There were the bones of a good story here, with the TARDIS team trapped on a doomed spaceship with an alien creature, but the potential was squandered. It should have been Alien, when what we got was Monsters Inc.
The most promising sub-plot was the one involving the General and her brother, but this was poorly developed thanks to those other sub-plots and extraneous characters.
As usual it looked good, with a very nice spaceship design, but junkyard planets have been done better (viz The Doctor's Wife).
We're now half way through the season, so time to take stock. I am a little disappointed overall, to be honest. The Doctor has yet to give us anything like a defining moment for this incarnation. It is all a bit too beige. We have hardly seen the new TARDIS interior, and the theme music has yet to grow on me. I think the problem is that it doesn't start with any kind of impact, like the sting of old. I am also pining for the sort of themes which Murray Gold used to provide. The music used to be criticised in the past, but I don't see many You Tube videos of fans producing their versions of any of the new stuff. It might work in the context of the stories, but we've had nothing memorable.
There are too many companions, and the Doctor's character is still not fully formed. I also think that Chibnall needs to stop writing every bloody episode. He simply isn't as good as Davies or Moffat. There hasn't been a single alien so far that I'd want to see return.
Apart from some details of the next story, and that one story revolves around King James I, the second half of the season is pretty much a mystery. Here's hoping things get better pretty damned quickly.
Posted by GerryD at 22:15