G is for... Gathering Coils 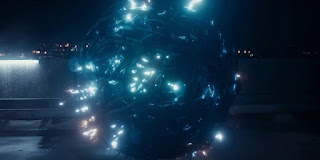 Semi-organic technology from the Stenza homeworld, which appear as a writhing mass of electrified tentacles. They are used to gather and collate information. A Gathering Coil was sent to Earth by a Stenza named Tzim-Sha to aid him in a manhunt. Random people were selected for these hunts, and they were taken back to their planet as trophies. Tzim-Sha sought to rule the planet should he be successful in his hunt for a young man named Karl, even though he was forbidden from using technological aids. The Gathering Coil first attacked a train on which Karl was travelling. Also on board were Graham O'Brien and his wife Grace. Her grandson, Ryan, had earlier discovered the pod which the Stenza had used to travel to Earth. The newly regenerated Doctor landed on the train after falling from the TARDIS. The Coil scanned Karl then departed, installing itself elsewhere in the city - Sheffield - to feed information back to Tzim-Sha.
The Doctor used her sonic screwdriver to disable it, but only temporarily. When Tzim-Sha went to Karl's workplace to abduct him, the Coil acted as a barrier to stop the Doctor and her friends from stopping him. Grace destroyed it with an electric cable, but at the cost of her own life.