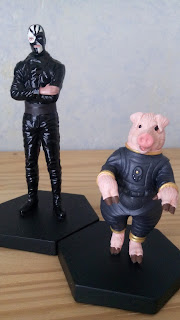 Just the two regular releases this month. First up, from the classic Caves of Androzani, comes Sharaz Jek. Hard to go wrong with this one, due to the simplicity of the costume and the stance. Even though he's masked, you can see that this is Christopher Gable beneath.
Alongside him is the most pointless release to date. So many figurines from the classic era they should be going for, yet we get the Space Pig from Aliens of London. As Space Pigs go, it is a very good Space Pig, I have to admit, and if you wanted a Space Pig in your collection then this is the Space Pig to have. I just didn't ever want a Space Pig.
Normality resumes next month with an Ogron and a Cheetah Person. Coming soon, we finally get a Cybus Cyberman, plus there will be a red drone New Paradigm Dalek and a Clockwork Droid.
Posted by GerryD at 20:57