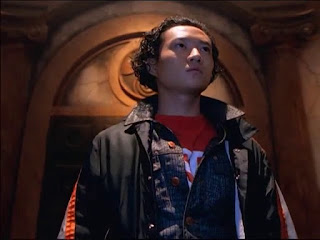 A young man who was a member of a street gang, in San Francisco, 1999. He and some friends were ambushed in an alleyway by a rival gang. Chang Lee was saved by the sudden materialisation of the TARDIS. He witnessed the rival gang members shooting down the Doctor. He accompanied him to hospital where he took possession of his belongings, after claiming to be a friend of his. When the Master took over the body of the ambulance driver, Bruce, he sought out the boy. The Master was able to win him over, claiming that the Doctor was evil, and had stolen the body intended for him. Chang Lee then assisted the Master in tracking down the regenerated Doctor, who was being helped by Dr Grace Holloway.
In the TARDIS, Chang Lee started to doubt the story he had been told, and came over to the Doctor's side. The Master killed him, but the TARDIS was later able to bring him back to life. The Doctor advised him not to be anywhere near San Francisco the following New Year, and Chang Lee was allowed to keep the bag of gold dust which the Master had earlier given to him, so he could start a new life.