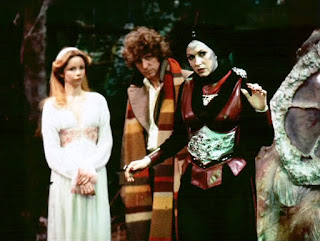 Lady Adrasta was the ruler of the planet Chloris, visited by the Doctor, Romana and K9 in response to a distress signal. This emanated from a large eggshell-like structure. Chloris was densely-jungled, and had very few metal deposits. Those who could hold a monopoly on metals could achieve great power - as Adrasta had done. She was a cruel tyrant who enforced her will through violence. Her guards could control Wolfweeds - vegetable masses which could spin suffocating fibre webs. Her enemies were thrown into The Pit - really an abandoned metals mine. Here they would be devoured by The Creature which resided there. When the Doctor entered The Pit he discovered that The Creature was really an alien ambassador from the metal-rich planet of Tythonus, imprisoned by Adrasta. Erato had come to trade metals for chlorophyll, on which its species thrived. Not wanting to lose her monopoly on metal supplies, she had tricked him into the mine and sealed him in. When the Doctor revealed this to her people they turned against her, as her greed had held back any chance of technological progress on their world. Her Huntsman used Wolfweeds to stop Adrasta from fleeing, and then Erato crushed her to death, in revenge for its many years of captivity.