Moffat Out. Chibnall In. 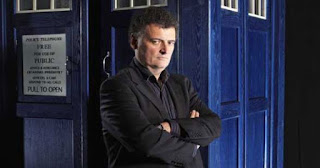 No doubt you will have already read that Steven Moffat has finally resigned as showrunner on Doctor Who - and his replacement is going to be Chris Chibnall.
There is not going to be any new series in 2016 - just a Christmas Special.
Moffat will be in charge of Series 10 - but that doesn't start until Spring 2017.
Am I happy with this?
Of course not. A whole year without any new series- and a bit of a prat at the end of it.

Chibnall has a little bit of cache with Broadchurch. The first series, whilst totally derivative, did get big viewing figures. The second series was laughable in its ineptitude. This is also the guy who was responsible for the first series of Torchwood - which everyone agrees was a bit of a mess. Chris Chibnall also wrote that TW episode Cyberwoman... I rest my case...
Do I trust this man to take over the show?
Ney. ney and thrice ney!
The BBC are obviously giving us a lot of guff about this. They are saying the programme will relaunch in the Spring of 2017, and that's a good thing - because the series came back in the Spring of 2005.
That's the from the same d***heads who said that the programme needed to go out in the Autumn -when it was darker. I do believe that one of these d***heads was Steven Moffat himself.
Logic dictates that Steven Moffat is a d***head...

What does this mean for the future of the series? Basically Moffat is more interested with Sherlock, Gatiss isn't trustworthy to take over Who. Neither is Toby Withouse.
The future is bleak...