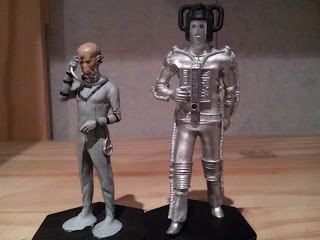 I say -ish, because I should have received these two figurines back on 31st December, but today is the first chance I've had to get to the Post Office to collect them. (Maybe I should have posted a picture of the delivery notification card, just to maintain the suspense...).
Both come from the Classic Series. Hooray!
First we have the Sensorite - the first Hartnell era figurine to be released that hasn't been a Dalek (barring the Doctor figure himself). A lovely figure, from an under-rated story. Dig those crazy plate feet. The arm bands make him a warrior if I remember correctly. (There's a handy guide to Sensorite markings in the accompanying magazine if I'm wrong).
The second figurine is the Cyberleader from Revenge of the Cybermen. Not everyone likes this particular design, but I have always had a soft spot for this story as well. Probably because I was 11 when I first saw it, and it was Tom Baker's first season. He's rather awkwardly posed, with one hand behind his back. I thought they might have gone with the arm across the chest pose, from that photo they always use (of the Cybermen in their spaceship). That, or the infamous hands on hips pose. 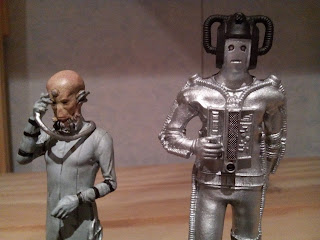 Next up, we're promised yet another Dalek - but watch out! It's the pathetic Daleks. One of the New Paradigm, who have thankfully been dumped from the programme since Capaldi arrived. In this case it's the white one. (He's either plastic bottles, or mixed paper and cardboard).
Posted by GerryD at 22:46