The Husbands of River Song - Review 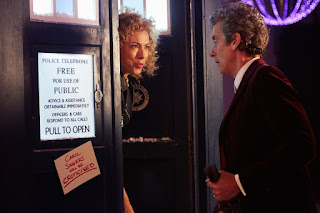 Three of them seen on screen in this year's Christmas Special, plus Stephen Fry in an adventure yet to be seen, apparently... Interesting to note that River often pinches the TARDIS when the Doctor isn't looking - opens up all manner of further River adventures.
This year, the special was broadcast as part of the BBC's late afternoon entertainment, rather than forming a focus for the main viewing of the evening. This seems to be part of the BBC's playing about with the scheduling of the programme this year. Series 9 was broadcast far too late, and the ratings suffered accordingly. I've just read that The Husbands of River Song came in 7th most watched show of the day - which is actually quite good. Above it were the (it had better be) finale of Downton Abbey, the usual soaps, Call the Midwife and Strictly - which you all expect to do well. The only oddity was one of of those CGI kids' movies getting number 6 place.
So what of the programme itself. I liked it. I think Peter Capaldi and Alex Kingston work very well together, and despite the "last date" aspect of the closing few minutes I hope they are paired together again in the future. It was an oddly paced episode. All rom-com and heist-caper for the first three quarters, then that rather elegiac ending.
Not quite as Christmassy as previous specials? Not at all. We started with an Earth colony that is celebrating the festive season, then go to a high class spaceship which is partying (something a lot of folk do at Christmas), then we go to the restaurant on Duralium or whatever it's called and a festive dinner date. That little sequence with the Doctor nudging the TARDIS forward hour by hour, year by year, setting up the whole restaurant business was lovely. 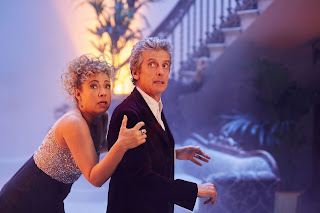 The actual plot was silly, and funny. Greg Davies was suitably villainous as King Hydroflax - or his head at least. Dim and ranting and cyborg, he is the natural successor to The Captain from The Pirate Planet. The other big guest star Matt Lucas simply did what he does best - playing the bumbling fool Nardole.
Not a single mention of Clara, thankfully. No Doctor pining-a-lost-love in this.
Funny that the TARDIS is trying to cheer him up - with holographic antlers. It was rather disarming to see the Twelfth Doctor laughing his head off (though not literally, thankfully). Best sequence of all, and one that we will all remember, is his over the top reaction to seeing the inside of the TARDIS and pretending (badly) that he is surprised. I hope to see more sarcastic humour, rather than just plain rudeness, when Capaldi returns for Series 10.
It won't be remembered as one of the greatest Christmas Specials ever (RTD was supremely gifted in the crowd-pleasing department), but it's currently my second favourite one since Moffat took over.
Posted by GerryD at 00:38

Email ThisBlogThis!Share to TwitterShare to FacebookShare to Pinterest
Labels: Series 9