Know Your Cybermen No.20 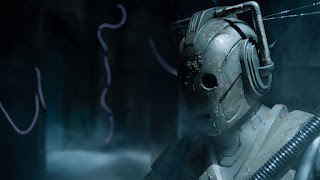 Hell Bent (2015)
At least two Cybermen are imprisoned in the Cloisters of Gallifrey. We see both of the post-2005 versions. The earlier RTD one was featured prominently in a photo published the week before transmission, but it is one of the newest versions which was seen in the finished programme. It attempts to grab hold of Clara. Owing to the entangling cables, it is impossible to see if the earlier Cyberman is a Cybus one.
The Doctor explains that these creatures are ones who attempted to break into the Matrix - either part of an invasion attempt or as spies. The presence of both types raises the question - did they come separately, or together? There is a theory, prompted by Nightmare In Silver, that the two versions overlapped and may have been contemporaneous for a time.
The alternative is that the Cybermen attempted to break into the Matrix on two separate occasions.
Anything to do with the Time War? The Cybermen have never been categorically stated to have taken part. Equally, it has never been stated that they did not take part at some point.
These captive Cybermen have now become part of the very thing they came to steal. 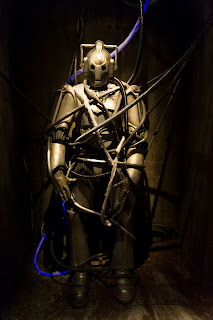