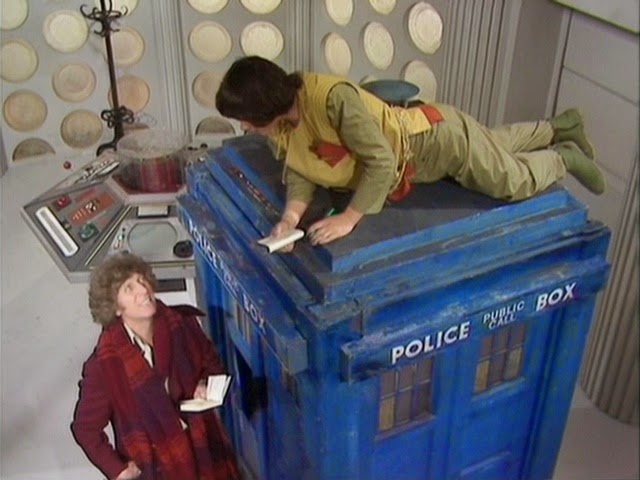 In which the Doctor becomes worried about the state of the TARDIS. Adric finds him brooding in the cloister room, contemplating on how the more you fix things, the more they fall apart. In short, he is worried about entropy. He decides that it is about time that the Chameleon Circuit was repaired. Rather than face awkward questions about Romana, he decides to forego the planned visit to Gallifrey. Instead, he will materialise the TARDIS around a real Police Public Call Box so that its measurements can be taken. These will be used by the Logopolitans to help repair the circuit. Logopolitans use the mathematics of block transfer computation to model space / time events.
Unbeknownst to the Doctor, the Master has already materialised his TARDIS around the police box - disguised as the same. This sets up a temporal trap, where the Doctor and Adric discover that within the police box is another control room with a police box in it. And within that is another control room with a police box in it, and so on.
The box sits in a lay-by, and a car has broken down here. Australian air stewardess Tegan Jovanka was getting a lift to Heathrow Airport to start her new job, driven there by her Aunt Vanessa. Vanessa sees a white figure watching from the fields opposite, though it has vanished when Tegan looks. Vanessa goes to the police box to summon assistance - and is killed by the Master. When she fails to return, Tegan follows and enters the box, becoming lost in the maze of TARDIS corridors. The Doctor and Adric emerge from the temporal trap to find themselves in the lay-by. The Doctor observes the white watching figure, which troubles him deeply. The police have arrived, and want to question the Doctor about two shrunken corpses sitting in Vanessa's car - her own and that of a policeman who had entered the box just after the Master had arrived. 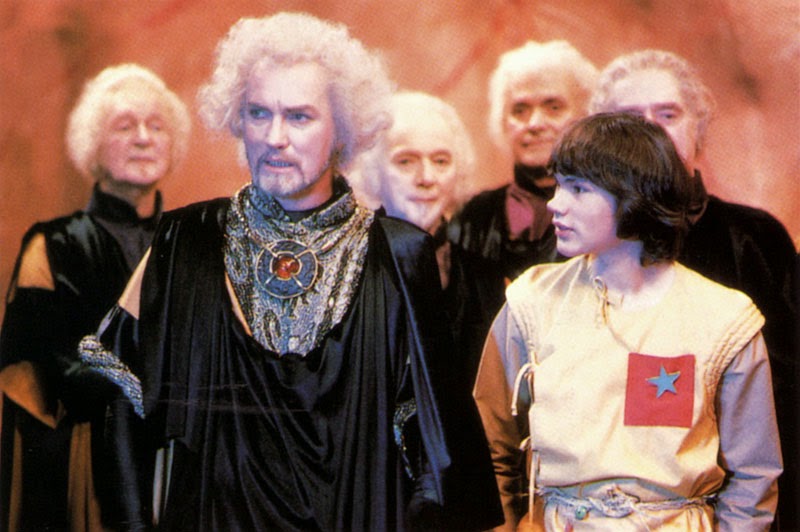 The Doctor realises his old enemy has escaped from Traken. Adric stages a diversion, and the Doctor rushes back to the TARDIS and dematerialises. The Master's ship is hidden aboard. To flush him out, quite literally, the Doctor decides to materialise the ship underwater - aiming for the Thames in West London. They miss and land on a pontoon. The Doctor sees the Watcher once more and goes to speak with him. On returning to the ship, the Doctor sets the co-ordinates for Logopolis. Tegan finally finds her way to the control room. With her aunt dead at the Master's hands, she must go with them. The TARDIS arrives on Logopolis, landing in a settlement of small dwellings grouped around a radio-telescope - which the Doctor is surprised to see. Logopolitans normally use only pure mathematics in their work with no need for technology. The Master materialises his ship outside the TARDIS, intent on a scheme of his own. The Doctor, Adric and Tegan are greeted by the Logopolitan leader - the Monitor. He begins to assist with the Doctor's request to help fix the Chameleon Circuit. All over Logopolis, the citizens calculate the block transfer computations. The Doctor will remain in the TARDIS whilst they do their work. Something goes wrong, however, and the ship begins to shrink. The Master has sabotaged the computations, killing a number of the Logopolitans with his Tissue Compression Eliminator. Adric and the Monitor are able to find the erroneous data and the ship reverts to its normal size. 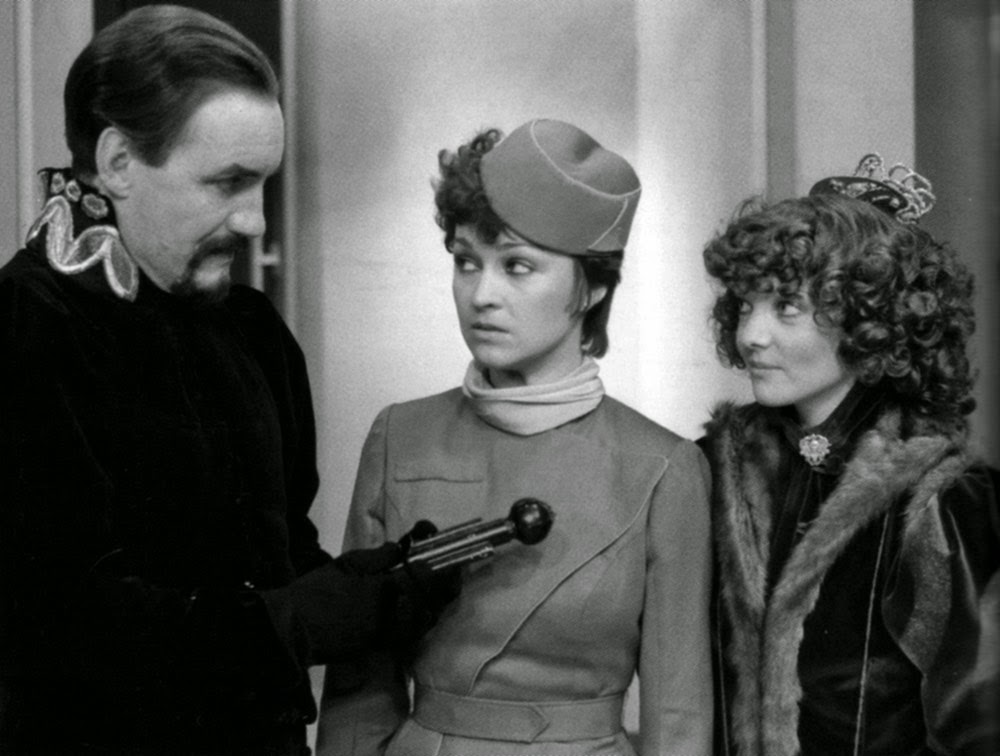 Adric is surprised to see Nyssa of Traken. She has been brought here by the Watcher. Believing him to be her father, she falls under the Master's influence. He then sets about bringing Logopolis to a halt - using sonic projectors to halt the work of the Logopolitans. He is aware that there is some great secret hidden here, and demands to know what it is. The Monitor is horrified. Logopolis has been maintaining the entire universe, which should have been destroyed by entropy long ago. They created the Charged Vacuum Emboidments - like the one that led to E-Space - in order to drain off the excess energy into these pocket universes. This is why they have the telescope - a replica of the Pharos Project on Earth which seeks to find extraterrestrial life. Their computations, fed through the telescope, keep the CVEs open. The Master's actions are irreversible. Entropy starts to eat away at the cosmos. The only hope is to go to Earth and run the program at the Pharos Project - with the Doctor forced to co-operate with his old enemy once more. As Logopolis crumbles, Tegan insists on going with them, whilst the Watcher takes Adric and Nyssa in the TARDIS. They travel to a point outside space and time. Nyssa watches in horror as her own world succumbs to the entropy field.
At the Pharos Project, the Doctor and the Master succeed in running the program and the CVEs are stabilised. The Master attempts to blackmail the universe, and the Doctor manages to stop him only at the cost of his own life. He falls from the telescope gantry. The Watcher has brought Nyssa and Adric here.
The Doctor, dying, informs his companions that this is the end for him - but the moment has been prepared for. The Watcher appears and merges with the Doctor's body - having been a projection of the Doctor all the time. The Doctor regenerates, and a younger, blond haired man appears in his place... 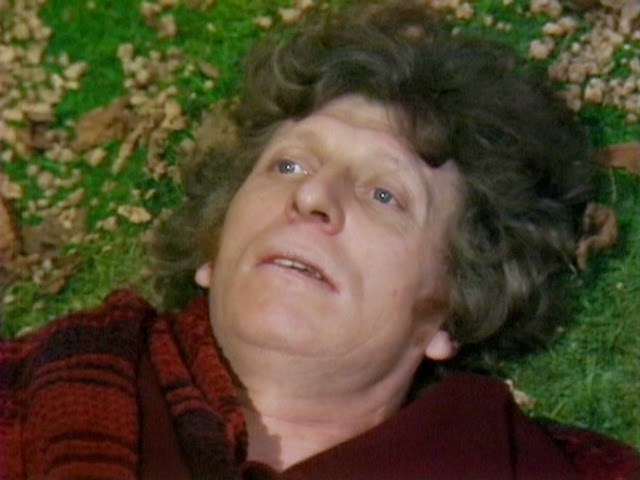 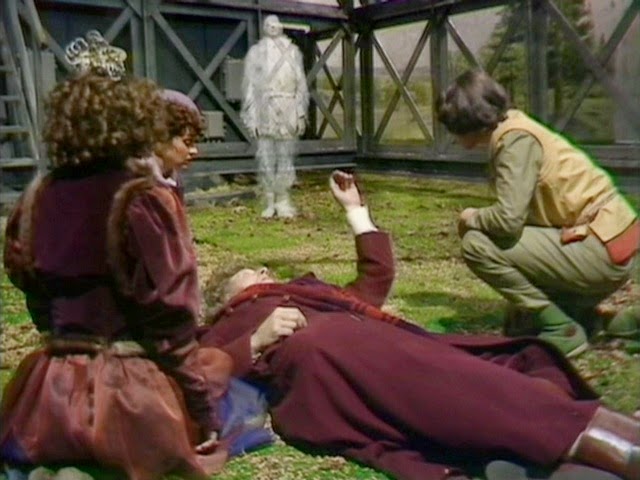 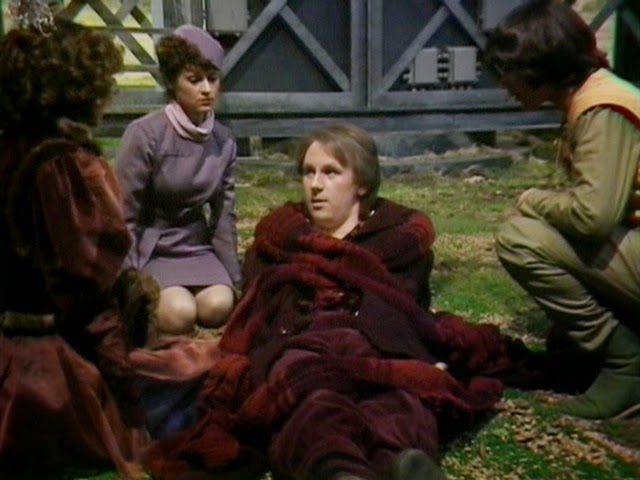 This four part adventure was written by out-going script editor Christopher H Bidmead, and was broadcast between 28th February and 12th March, 1981.
Closing Season 18, it marks the end of Tom Baker's seven year reign as the Doctor - still the most popular incarnation of the character. The story also sees the debut of companion Tegan Jovanka, played by Janet Fielding. Nyssa (Sarah Sutton) becomes a companion proper. So begins the era of the "crowded TARDIS".
We also get our first proper look at Anthony Ainley's Master. He is kept off screen for the first two episodes. His TARDIS is seen lurking within the Doctor's, and we only hear his malevolent chuckle in the first half. In hindsight, it was probably a mistake to model the Master's new look so much on Roger Delgado's original. It only serves to invite comparison - and Ainley will always be on a loser as far as that is concerned.
There are echoes of the Pertwee era throughout - not surprising considering that Barry Letts is still executive producing. The radio telescope takes us back to the original Master's introduction; the TARDIS within TARDIS is reminiscent of The Time Monster; and the Watcher - an intermediate form of the Doctor from between the two incarnations - reminds us of the character of Cho-Je in Planet of the Spiders, which saw out the last Doctor.
When Bidmead took on the role of script editor at the beginning of the season, he had been determined to bring more hard science concepts into the programme. The science in this certainly baffled this particular viewer on its initial broadcast (I had my 17th birthday during its run). It is another of those stories that really requires more than one viewing just to work out what all the "heat death" and CVE stuff is all about.
For someone so scientifically minded, however, you do have to wonder what Bidmead was taking when he came up with the idea of flushing the Master out of hiding by landing the TARDIS under the Thames and opening the doors. 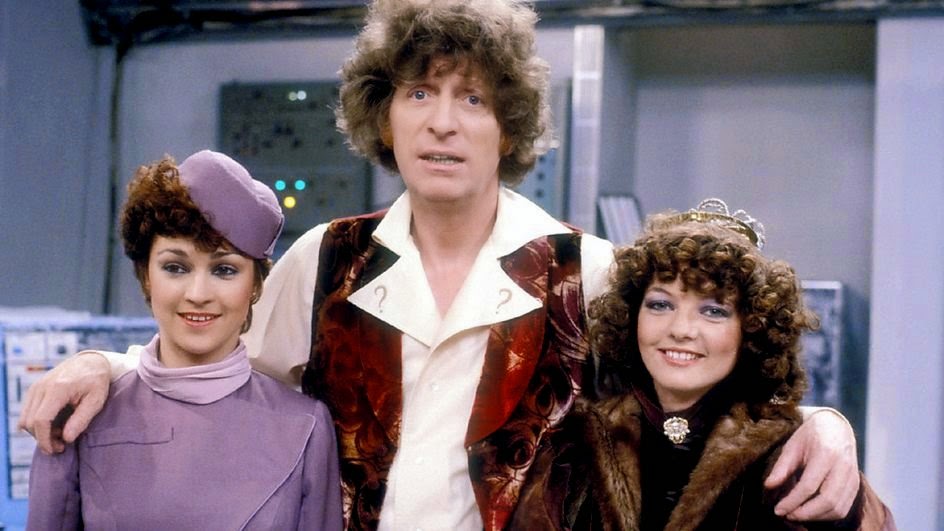 Only a small number of guest artists appear. Thee police inspector who attempts to arrest the Doctor is played by Tom Georgeson, who had earlier appeared in Genesis of the Daleks. Aunt Vanessa is Dolore Whiteman, and The Monitor is John Fraser.
Episode endings are: 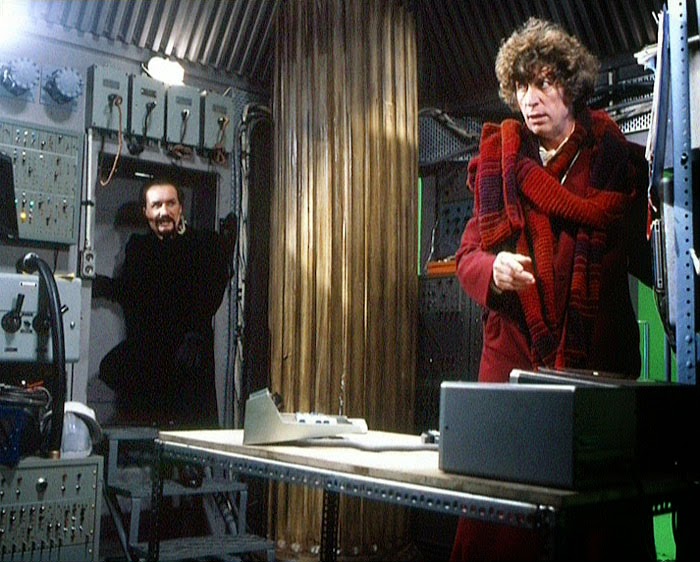 Overall, a suitably funereal mood hangs heavy throughout. Probably the best of Tom Baker's later performances. Little to fault really (save maybe that final model shot). Voted in 2013 the most popular Season 18 story. Part One again shows how good Adric might have worked had the production team really bothered. For better or for worse, Doctor Who would never be quite the same once Tom left. 17 year old me was in mourning.
Things you might like to know:
Posted by GerryD at 00:19