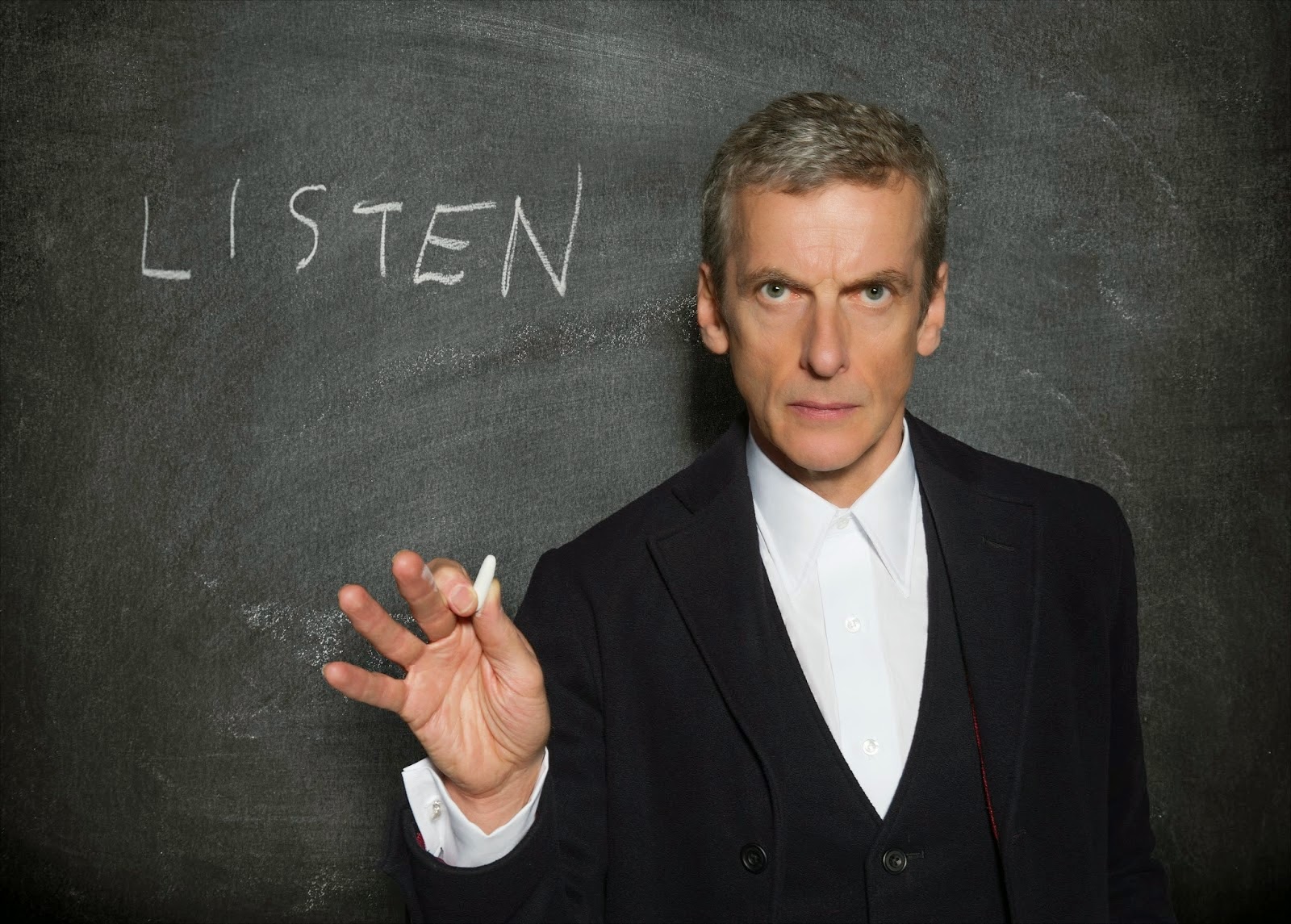 What a remarkable episode. A limited cast and only a handful of locations made for a claustrophobic, frightening tale about the nature of fear, dreams and nightmares.
The Doctor obviously has a bit too much time on his hands: with the TARDIS parked above the Earth he ruminates on evolution and survival. What if, when you talk to yourself, you are actually talking to something unseen? Something which has developed the ultimate in camouflage. The Doctor wants to meet it / them.
As it is he might have done, but we weren't privy.
Did he see whatever was coming in through the door of the time-ship at the end of the Universe? Or was it just the vessel's systems breaking down?
Who / what was under the bed spread? There was definitely something. Was it just one of young Rupert Pink's friends playing a trick? I don't think so somehow. (Can't wait to see Character Options' Bedspread Monster figure...).
Who moved the chalk? Probably the same person who moved the coffee cup. Clara did say it looked like the Doctor's writing. Did he forget he did it and just assumed some other force was at work?
At times, the unseen presence knocking and banging at the TARDIS made me think of the story Midnight - another character piece with small cast and claustrophobic feel.
The whole train of events is kicked off by the Doctor's memory of a nightmare - one shared by many of us - of something lurking under the bed - ready to grab you by the ankles and drag you into the darkness. Where did this memory come from? Turns out Clara was inadvertently responsible. Not only does she provide the young Doctor with the nightmare, when he is sleeping in that barn on Gallifrey, she also sets Danny Pink on the path to becoming a soldier.
I was worried last week that the inclusion of children might prove to be the kiss of death for this story. I needn't have worried. Young Remi Gooding was very good.
Apart from a brief appearance by a caretaker called Reg, and the sequence with Remi, this was all about Capaldi, Coleman and Samuel Anderson - as both Danny and his great grandson Orson.
Danny grows on me all the time, and I can't wait for the eventual meeting with the Doctor (due in The Caretaker, I believe). Orson suggests his ancestor had experience of time travel, so we must assume that Danny will take a trip in the TARDIS at some point. And is Clara also an ancestor?
The scene which will generate most debate is obviously the Gallifreyan barn sequence - our first sighting of the young Doctor. Nice to tie it in with the location chosen by the War Doctor to activate the Moment. (And so lovely to see John Hurt again). Was that his parents? Not necessarily. Who were the others referred to - that the Doctor could join inside? Possibly a Gallifreyan boarding school - and those were the caretakers.
Overall, one of the best Moffat scripts for a long time. He should stick to these character-driven pieces. Yes, it had an element of timey-wimey - with Clara being responsible for so much - but it wasn't laboured the way it usually is. Apparently this was the "cheap" episode. Let's have more of them.
Posted by GerryD at 22:31