The mechanical men of that densely wooded region near Nottingham... 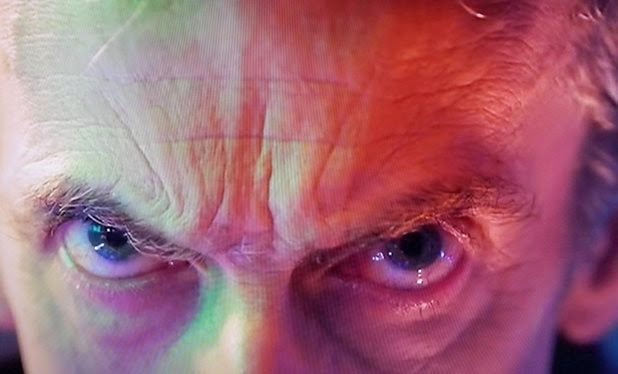 Easter is almost upon us. Most years since 2005, that would have meant the big publicity build up to a new series (or half of one). A good time instead to take a look at what we know about Series 8 I think.
Most of the first half of the series is in the can. As with previous series, more is known about some episodes than others - usually thanks to location filming, or to guest artists having a problem keeping schtum on the various social media.
Episode 1 is, naturally, written by Steven Moffat. We know that it is set in late Victorian times and sees the return of the Paternoster Gang. If they don't have the sonic devices created by Blue Peter competition winners, then we will know the Gang feature in more than one episode. Scenes on location that were reported in the news featured Capaldi in his nightshirt riding a horse. Some newspapers stated that the villain would be Jack the Ripper. We know that can't be the case as Jack was killed by Madam Vastra back in Series 6. A black clad, wan-faced gentleman was seen on location. Interestingly, his top hat was covered in those little coloured balls that the CGI folk use. The director of this story, and the next one, is Ben Wheatley. Wheatley's regular actor Michael Smiley will be playing Colonel Blue in one of these stories.
Episode 2 is written by Phil Ford. He offered the cryptic "behind enemy lines" to describe his tale.

If the second episode is a bit of a mystery, rather a lot seems to be slipping out about Episode 3. The writer is Mark Gatiss. A couple of weeks ago some story titles were being bandied about on the old interweb. One ran along the lines of the title of this post - in not so many words. It may have seemed like an odd title but then one of the actors put on his CV that he would be playing Alan-a-Dale - as in one of Robin Hood's Merry Men. The real Robin might have been based upon a number of genuine historical figures, but the classic line-up of Merry Men we are used to is purely fictional. So the first part of the story title makes some sense.
Tom Riley (Da Vinci's Demons) guest stars. Working out who he might be playing seems very obvious. If he is RH, then I'll hazard a guess that Trevor Cooper (Revelation of the Daleks) could be a certain rotund friar. News came in yesterday that Ben Miller will be playing the villain. One website is foolishly predicting he might be the Master. Isn't the Sheriff of Nottingham a more obvious possibility?
Whatever the case, it's all being directed by Paul Murphy.

Episodes 4 & 5  are directed by Douglas Mackinnon. 4 is written by Moffat.
5 is written by Steve Thompson. This is the one featuring Keeley Hawes as Miss Delphox, and it is set on a strange and perplexing planet.
Location filming took place around Cardiff for one (or both) of these stories. A black clad figure with electronic implants on his face was seen, along with some oddly dressed extras, down in Cardiff Bay - an android perhaps? A Minotaur-like alien was also seen roaming a park in Bute.
We know that there is going to be new regular / recurring character named Danny Pink (Samuel Anderson) in the series. He is supposed to be a fellow employee of Coal Hill School. However, he has been seen during this particular phase of filming with grey hair, and wearing the red Sanctuary Base spacesuit, worn by the Doctor between Series 2 - 7. Capaldi was also seen filming scenes with him - with those coloured CGI balls covering his chest.
The most recent episode to be filmed is Episode 6. The director is Paul Murphy once again, and it is written by Gareth Roberts.
It sees the return, after a long absence, of Jimmy Vee - Bannakaffalatta, the Space Pig, the Moxx of Balhoon as well as junior Slitheen in The Sarah Jane Adventures. Location filming saw Capaldi wearing a brown lab coat - the sort your woodwork teacher used to wear when I was a lad. There was the first glimpse of the new Sonic. Two aliens seen - one played by Vee and a blue eyed thing seen only in the shadows.

And that's it so far. Nothing overly spoilery. No returning monsters known yet. Will Capaldi demand Daleks in his first series? Will there be a new Master? How many fellow Exec-Producers will Moffat run through? How much longer will he be sticking around?
To be honest, we don't even know how many episodes there will be. Moffat has said "at least 13". Might be 13 plus a Christmas Special - or the 13th will fall on December 25th.
Posted by GerryD at 23:42