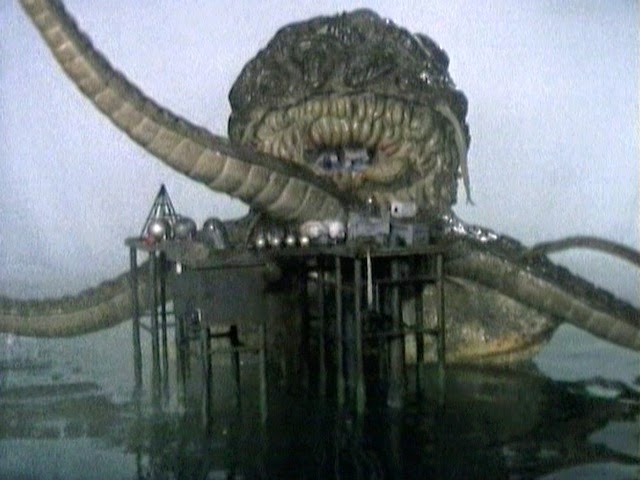 In which the Doctor and Romana seek out the fifth segment of the Key to Time on one of the moons of Delta Magna. Due to the marshy terrain, K9 is stranded in the TARDIS. The Doctor is shot at by crewmen from a refinery which is located out in the bay. They arrest him and take him to the complex. Romana, meanwhile, is captured by the green-skinned natives who dwell in the marshes. They plan to sacrifice her to their god Kroll. The Doctor finds that he was mistaken for a notorious gun-runner named Rhom-Dutt who is rumoured to be supplying weapons to the natives. The refinery boss, Thawn, hates the natives. He derides them as primitive "Swampies". They were actually the original inhabitants of Delta Magna, but were forcibly relocated here after the planet was colonised by people from Earth. The Doctor learns of the sacrifice, and deduces that Romana is to be the victim. He slips away from the refinery and rescues her. The creature which was about to attack her proves to be a native in a costume. They find an ancient text which tells of their removal to this moon and about Kroll - a giant squid which swallowed a sacred idol. 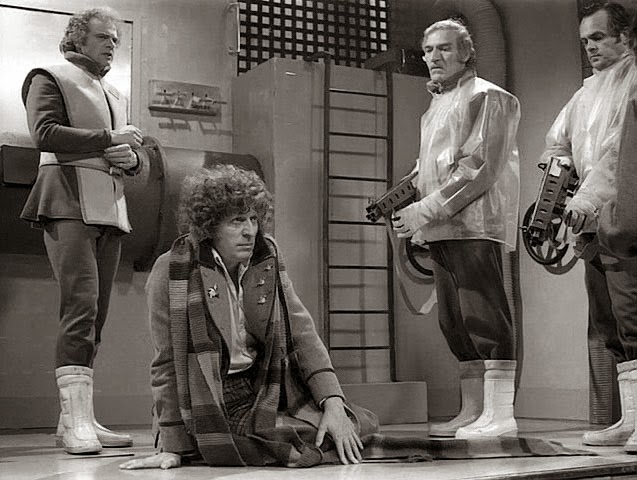 The Doctor is puzzled by the huge quantities of methane which the refinery is processing. It turns it into food for the increasing population of Delta Magna. The bay should not produce anything like this quantity. The refinery crew start to register huge displacement on the bed of the bay. The whole topography changes. As the Doctor and Romana flee from the native settlement they discover that Kroll is no mere myth, as it rises up from the bay. It is a massive squid, with tentacles a mile long. The native leader, Ranquin, takes the appearance as a sign that their planned uprising against the refinery crew will be a success. Rhom-Dutt has provided a number of weapons to them. The Doctor now knows where the methane is coming from. Kroll has lain dormant for centuries, and the refinery activity has now woken it up. 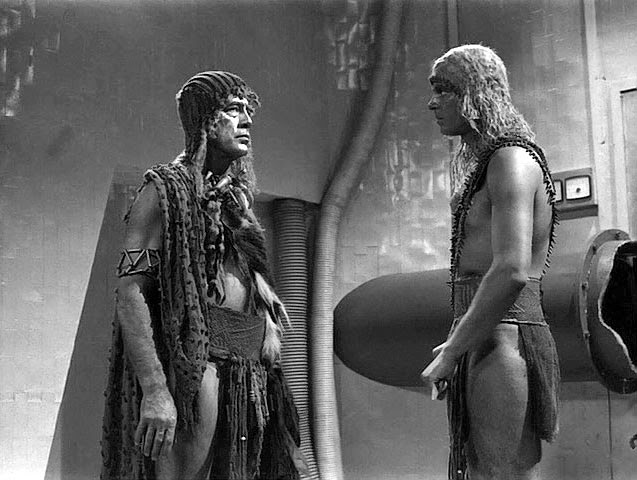 The weapons he has supplied prove to be useless, and Rhom-Dutt finds himself captured along with the Doctor and Romana. They are going to be executed by being stretched to death, but the Doctor manages to free them. Rhom-Dutt is killed by Kroll when it next appears. It transpires that Thawn has secretly funded the gun-runner. The guns were never supposed to work - only to give the refinery boss an excuse to exterminate the natives. Thawn is going to redirect a missile to destroy their settlement when Kroll attacks it, but the Doctor sabotages it. Kroll then attacks the refinery - attracted by the machinery. Ranquin is killed by the creature. Thawn then dies at the hands of the new, more progressive leader, Varlik. The Doctor uses the locator wand on Kroll, as he has realised what has made it grow so large. The idol it ate was the fifth segment. The creature vanishes. Varlik and the refinery crew will need to live and work together more harmoniously from now on. 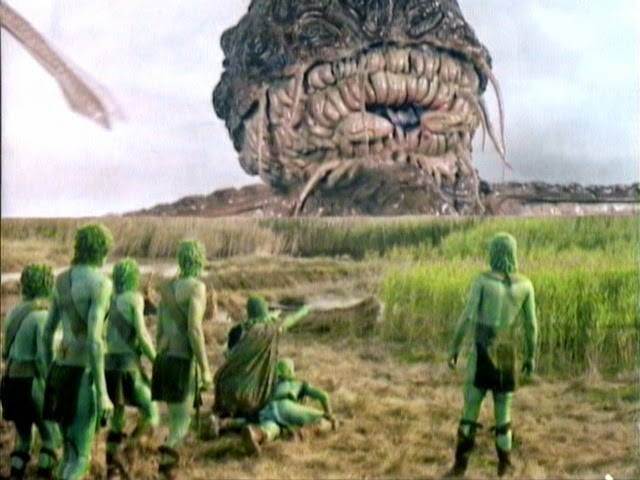 This four part adventure was written by Robert Holmes, and was broadcast between 23rd December 1978 and 13th January 1979.
Back in 1969, Holmes had used the Western genre as an influence in his story The Space Pirates. There are Western influences here as well - with the exploitation of the "Swampies" mirroring that of native Americans. General themes of racism and colonialism are present throughout.
Another influence is King Kong - in the scenes at the end of part one where Romana is due to be sacrificed.
In some ways, this story acts as a dry run for Holmes' far superior 1984 story The Caves of Androzani. Both stories feature gun-runners whose paymaster proves to have ulterior motives - namely offering an excuse for war. Both stories take place on the satellite of a densely populated Earth colony.
Even in these CGI days, Kroll remains the largest monster in the history of the programme. It is a very good model, but unfortunately due to a filming problem, it does not fit with the location shots. There is a rather harsh dividing line between the live foreground and the model work. 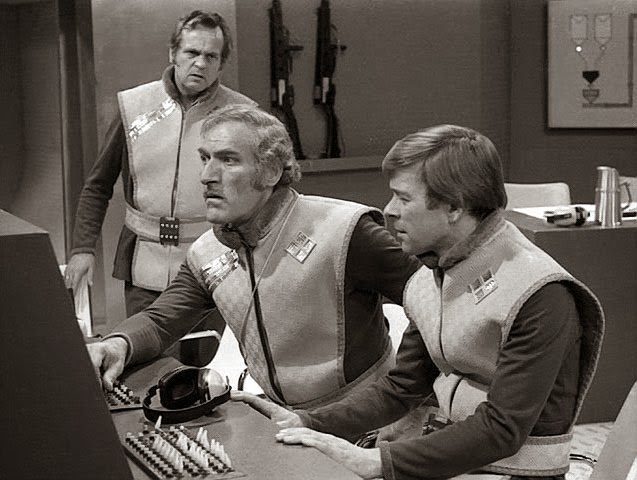 The story sees the final appearances in Doctor Who of two actors who had previously guested on multiple occasions - John Abineri (Ranquin) and Philip Madoc (refinery deputy Fenner). Madoc was reportedly unhappy, as he had thought he was going to get the part of Thawn - which went instead to Neil McCarthy. With K9 stranded in the TARDIS, John Leeson gets a chance to appear on camera - as refinery worker Dugeen. Rhom-Dutt is played by Glyn Owen. Varlik is Carl Rigg.
Episode endings are: 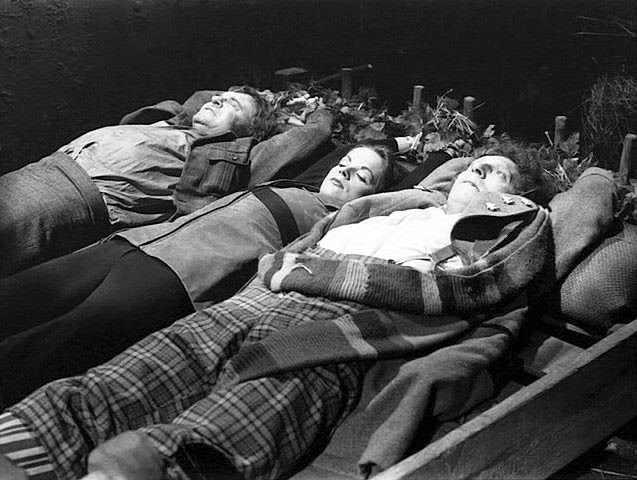 Overall, it has the look and feel of the end of season show where the money has run out. An unusually poor contribution from writer Holmes - though, as I have said, it shares elements with his most popular work. An interesting location, making a change from quarries.
Things you might like to know: