Setting out my stall...

So what is this blog about then? Well, primarily about Doctor Who, that once unloved and neglected BBC TV show which has taken the world by storm in the last 7 years. I may, on occasion, digress into other areas that are of interest to me, but it's mainly going to be about TARDISes and Time Lords.

I was born during the Hartnell era (he was half way to Peking at the time - so that will give you an idea of how old I am). My earliest recollections are of late Troughton - The Wheel in Space - when I was 4 years old. I have therefore been a fan for over 40 years. The programme and I are both heading towards our big Five-O.
So why a blog now? On 25th March I attended the Convention in Cardiff Bay. I've always been an armchair fan only - never attending events and only flirting with organised fandom. As I spoke to people at the Cardiff event, I realised that I love talking about the programme - but don't always get the opportunity. This blog will go some way to addressing this - even if I'm only talking to myself in a way.

What form will this blog take? Well, it's just going to be my thoughts and musings on the programme - the new episodes as they evolve and a look at the many stories that have gone before.
What it won't be is:


Anyway - I could bang on about canon for ages (and no doubt will at some point). Suffice to say that what will follow will be my take on the TV programme and only a little else. Season 7 is part way through filming, and a new companion is waiting in the wings. The golden anniversary is just around the corner.It is a magical time to be a fan (armchair or otherwise)... 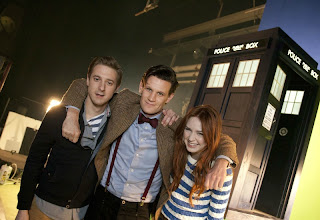