Did I mention I have my own TARDIS? Not as good as the Doctor's - its smaller on the inside for a start - but it gets me where (and when) I need to be. I popped forward to 23rd November 2013 so I could tell you all about the 50th Anniversary Special.
I can't say I was too impressed. Trying to cram all 11 Doctors into a 90 minute programme led to the previous incarnations having not much more than a walk-on part. The casting of Dr Alan Chapman as the First Doctor was inspired from a look alike point of view - 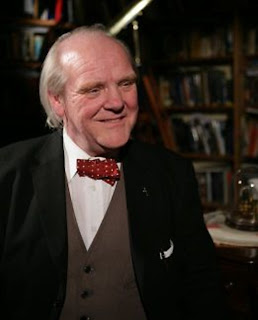 but he is not an actor. David Troughton was uncannily like his dad, both physically and vocally, but Sean Pertwee in a white bouffant wig struggled to capture the essence of the Third Doctor and just looked embarrassed for the 2 minutes he was on screen. His Venusian Aikido scene with the Drahvins was one of the highlights for me, however.
The revelation that the Master was not the Doctor's brother but rather his sister came as a complete surprise. Miranda Hart gave a suitably sinister performance. I'm not sure having the Daleks, Cybermen, Ice Warriors, Zygons, Autons and the Abzorbaloff all in one story was very clever either. Each appeared for only about 30 seconds apiece before being blown up (by Danny Hargreaves, of course). The aliens' plan to hollow out the Moon and replace the core with an atomic motor in order to crash it into Big Ben and so save both Mondas and Skaro from being destroyed thus altering time so that the Doctor would sleep in and miss the Time War was just so predictable. It was virtually a remake of the 2012 Xmas Special, except without the Skarasen eating Edinburgh Castle.
And then there was the regeneration. Matt Smith's final moments brought a tear to the eye, as he got blown up (by Danny Hargreaves, of course). The BBC managed to keep the casting of the 12th Doctor so closely under wraps that the reveal of ... But that would be spoiling things for you.
Posted by GerryD at 18:45