What's Wrong With... The Reign of Terror 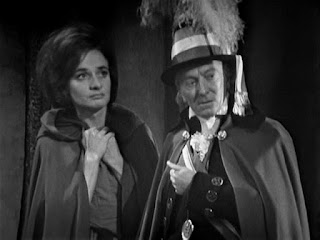 First of all, we are missing two episodes - the fourth and fifth ones. As with Marco Polo, this is very annoying as everything around them still exists. It's bad to lose a whole story, but it seems even worse to lose just a bit of a story but keep the rest.
In the very first episode of Doctor Who, Susan is given a book about the French Revolution by her history teacher, Barbara. She has apparently specifically asked for it. She opens a page at random and immediately notices something which isn't correct. This all seems to imply that she has visited this period before. Add to that, she tells the two school teachers in this story's first episode that the Reign of Terror is the Doctor's "favourite period in history".
Quite why the Doctor would favour this time of bloodshed and chaos, with mass beheadings, governments falling ever other week, and everyone in France spying and reporting on their neighbours, who can guess? Why not the Belle Epoque, if he wants to favour a bit of French history?
If Susan really has visited this time before, she doesn't show any sign of it.
Once the TARDIS crew have been split up, Ian finds himself in a jail cell, separated from Susan and Barbara. Ian has a very brief talk with a fellow prisoner, who promptly dies after passing on a message. This relates to an inn called Le Chien Gris. All the people in this story are speaking French, but it is being translated into English for our benefit (later explained as a function of the TARDIS telepathic circuits, though that's a long way off). So why isn't Ian directed to an in called The Grey Dog? Later there is mention of another inn, where Ian and Barbara will get to see Napoleon. That's called The Sinking Ship. It isn't called Le Navire En Perdition.
Additionally, at one point the Doctor speaks to the boy who rescued him from the burning building in French. What would the boy have heard?
Susan is a total wuss in this story. She falls ill, but on the way to the guillotine she decides that she'd rather get her head chopped off than try to make an escape bid. Barbara rather stupidly decides to stay with her. Most people would have been off down one of those narrow alleyways in a second.
Both women get rescued anyway, by Jules Renan and his friend. Jules insists that his escape committee never use surnames - only to use surnames all the time. The two guys at the unsafe safe house were known only by their surnames.
Wouldn't it have been better if they only used first names as well? How many Jules were there in Paris at this time? Compare with the number of Renans. An unusual surname would have had the Revolutionaries knocking at your door in no time.
In conversation with the Doctor, Robespierre states the exact date. He says: "If this plot is successful, tomorrow, the 27th July 1794 will be a date for history". Not only is this clumsy dialogue - who speaks like that? - but Robespierre instigated a whole new calendar. He shouldn't have used July at all - but Thermidor. He should have said: "If this plot is successful, tomorrow, the 9th of Thermidor, Year VI, will be a date for history".
Before the Doctor got to Paris, he sat down on a road marker for a rest. It said "Paris 5 KM". The kilometre wasn't adopted in the Paris region until 1800.
Only one very slight fluff this time, but it is from Hartnell as usual - "I see you haven't heard the naa - news yet, my man".
Behind the scenes for this story, one major disaster. The director, Henric Hirsch, collapsed outside the production booth during the studio rehearsals for the third episode. He had been struggling with the logistics of making such a complex show, and things were hampered by his poor command of English. Producer Verity Lambert kept things going with the PA and AFM until John Gorrie, who had directed The Keys of Marinus, could be brought in to direct the episode that evening. Hirsch later recovered to take over the later episodes.
Posted by GerryD at 21:23

Email ThisBlogThis!Share to TwitterShare to FacebookShare to Pinterest
Labels: www