H is for... Happiness Patrol 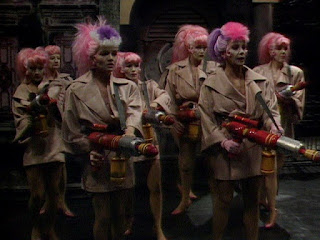 Predominantly female police squads who enforced happiness and jolity on the planet Terra Alpha, an Earth colony. The planet's ruler, Helen A, had outlawed sadness and depression. Anyone found even remotely miserable (known as a Killjoy) was either shot on sight, or sent to the Happiness Patrol auditions at the Forum. If they failed to amuse, they were executed. Prisoners could also be held in designated areas awaiting transportation to the Forum, where booby-trapped joke machines disposed of other morose citizens. A man named Silas P was an undercover Patrol member. He would pretend to be sad to entrap Killjoys. Ace befriended a Patrol member named Susan Q, who had become disillusioned with her duties. The Doctor duped Silas P into appearing to be unhappy, so that he was killed by his own colleagues. The Patrol found itself unable to act against anyone who appeared to be happy even, as in the Doctor's case, he was only pretending to get round their rules.
The Patrol would have been disbanded after the Doctor engineered Helen A's downfall.