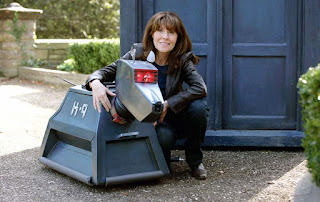 In which the Doctor and Rose go undercover at a London school - Deffry Vale. They have been contacted by Mickey, who has found news reports of UFOs in the area. The Doctor is posing as a locum physics teacher named John Smith, whilst Rose works in the canteen. Some of her colleagues are very secretive, and they handle the cooking oil as though it were highly acidic. The school has recently seen vastly improved exam results, following the arrival of Headmaster Mr Finch and a batch of new staff. The Doctor is surprised by the scientific knowledge exhibited by many of the pupils. Rose is mad about the chips. A journalist arrives at the school to interview Finch, and the Doctor is delighted to see that it is Sarah Jane Smith. That night, the Doctor, Rose and Mickey break in to have a look around. Sarah has had the same idea. She discovers the TARDIS, and learns that Mr Smith is the Doctor. She joins him in his investigations. In the Headmaster's office, they see a number of large bat-like creatures hanging by their feet from the ceiling. The Doctor notes that there are the same number of creatures as there are new staff. 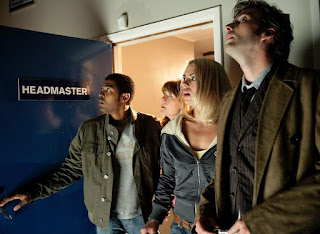 The Doctor gets a sample of the oil in which the chips are cooked, as he has noted that pupils who don't eat them are less bright than those who do, and they do seem to be particularly addictive. Rose realises that she is suddenly smarter, and she eats a lot of them. The Doctor wants to analyse the oil, and Sarah takes him to her car. In the back is K9 Mark III, now sadly defunct. They all repair to a nearby cafe, where the Doctor gets K9 working again. As it analyses the oil, Sarah questions the Doctor as to why he never came back for her. She explains that he failed to drop her off in South Croydon all those years ago - it was really Aberdeen. The Doctor points out that she has got on well enough without him. Rose is not happy to meet someone from the Doctor's past - causing her to realise that she is not unique. There were others before her, who got left behind. The Doctor points out to her that he can never have a normal relationship with a human. They will grow old and die, whilst he will keep on regenerating.
K9 announces that the oil is a natural product of the Krillitane race. These creatures invade other worlds and biologically assimilate selected features of the conquered species. This is why the Doctor failed to recognise them. They can temporarily take on the form of other races, and the Doctor realises that Finch, the new teachers and canteen staff are all alien. They are spied upon by Finch and one of the Krillitanes. 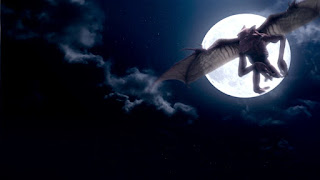 The next day the Doctor confronts Finch - real name Brother Lassar. He reveals that he is seeking to solve the Skasis Paradigm. This mathematical equation would allow the Krillitanes to decipher the secrets of the universe, and make them all-powerful. Finch knows that the Doctor is a Time Lord, and offers to bring his people back if he joins them. Rose and Sarah have had a huge, jealous, argument but have now bonded as friends. They convince the Doctor that he must stand against the Krillitanes. The teachers kill the other staff and then order all of the schoolchildren to link up to their computers. One boy, Kenny, is not allowed to eat chips and so is unaffected, and he joins the Doctor and his friends. The Krillitanes revert to their natural form and hunt them through the school. Mickey disables the computers whilst K9 holds the aliens at bay. The creatures have become allergic to their own oil over the generations. They combust when they come into contact with it. K9 agrees to hold Finch and the others in the canteen kitchen whilst the others escape outside with the schoolchildren. The robot dog sacrifices itself to blow open a vat of the oil, which splashes over the Krillitanes. The school explodes.
The next day, Sarah visits the TARDIS. She declines an offer to rejoin the Doctor, realising that the Doctor was right about her. She has important work to do here on Earth. She does, however, recommend that Mickey join the TARDIS crew. He has come to realise that he is only ever treated like K9 by the Doctor and Rose - their tin dog. Mickey departs with the Doctor and Rose. She is not amused. As the TARDIS fades away, Sarah sees that the Doctor has left her another gift - K9 Mark IV... 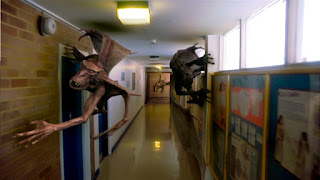 School Reunion was written by Toby Whithouse, and was first broadcast on 29th April, 2006. Whithouse had been an actor and stand-up comedian before concentrating on writing. He had created the series No Angels, which ran from 2004 - 2006. He would go on to become one of the most prolific Doctor Who writers other than the showrunners, as well as creating the BBC 3 supernatural comedy-drama Being Human. It was recently announced that he would be writing for Series 10, due in 2017.
Russell T Davies had decided that in its second series, the programme could relax regards bringing in references from its past. Apart from the Daleks, the TARDIS and the theme music, he had tried to keep references to a minimum in Series 1 so as not to alienate new viewers. Another classic monster was scheduled to return in 2006, and Davies decided that now would be a good time to have the Doctor encounter one of of his old companions. This would allow him to further explore the relationship between the Doctor and Rose, as she would see that there wasn't necessarily the future she thought she would have with him. There were others before her, and people eventually got left behind - even his best friend. 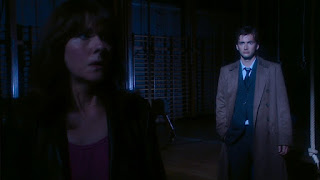 The returning companion could only ever be the greatest of them all - Sarah Jane Smith, as played by Lis Sladen. A bonus would be that she would bring K9 along with her.
Producer John Nathan-Turner had tried to tempt her back to bridge the changeover from Tom Baker to Peter Davison. When Sladen turned this down, he had come up with a spin-off series idea in which she would be paired with K9, a gift left to her by the Doctor. Only a pilot had ever been made, but it achieved canonical status when K9 joined Sarah at the beginning of The Five Doctors - Sarah's last appearance. Davies and his producer, Phil Collinson, invited Sladen out to lunch and discussed their ideas for bringing Sarah into the new show. She was initially very resistant, fearing that they were only looking for a cameo that might undermine the character she had created. Once she learned what the part entailed, she agreed to sign up. K9 voice artist John Leeson agreed to reprise the metal mutt.
Surviving K9 co-creator Bob Baker had been attempting to get his own K9 series off the ground for some time, but he gave this story his blessing - realising that having it appear in the highly popular new BBC Wales series would actually make trying to sell his own show much easier.
Whithouse's initial idea had been to have a story set around a military base, but Davies suggested the school setting. 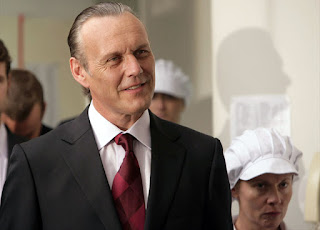 This story would also see Noel Clarke's Mickey Smith join the TARDIS crew, as a means of setting up his departure / reappearance / departure later in the season.
Principal guest artist was Anthony Head, playing Mr Finch. After a string of popular will-they-won't they? coffee commercials, he had gone off to the US and become famous for his role in Buffy the Vampire Slayer. This series, in terms of the way it was structured and created, had been a major influence on how Davies wanted to bring Doctor Who back.
Story Arc:


Tardisode:
Mickey Smith is in an internet cafe investigating news items about UFO activity near Deffry Vale School. He is on his phone, speaking to Rose in the TARDIS. He finds that his investigations get only so far before they are blocked, and the word "Torchwood" flashes up on the screen. 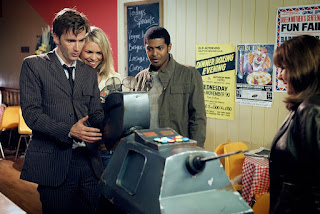 Overall, a joy of an episode. The actual plot is really quite inconsequential. This is all about the return of Sarah Jane Smith (and K9, of course).
Things you might like to know:

Email ThisBlogThis!Share to TwitterShare to FacebookShare to Pinterest
Labels: Series 2