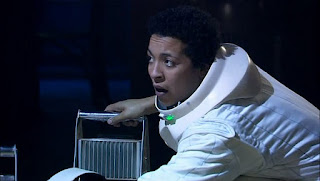 A member of Professor River Song's archaeological expedition to the Library, to ascertain what had happened to close it down some 100 years before. The expedition was financed by Strackman Lux, grandson of the man who had created the planet-spanning Library. Like the rest of her colleagues, Anita poked fun at Lux's secretary, the naive Miss Evangelista - something she would soon come to regret.
The team quickly came under attack by the Vashta Nerada - so called "piranhas of the air". These were flesh-eating microscopic creatures which lived in shadows. The technology of the team's spacesuits allowed the victims of the Vashta Nerada to retain some consciousness for a short time after they had been killed. Anita was their final victim. The Doctor had developed a liking for her, and her death prompted him to confront the creatures and propose a solution that would allow all the human survivors to go free, whilst leaving the Library for the Vashta Nerada to continue to inhabit.
Whilst their physical bodies had perished, all the deceased team members had their consciousness downloaded into the Library mainframe - to live on for as long as the Library remained operational.

Played by Jessika Williams. Appearances: Silence in the Library / Forest of the Dead (2008).
Posted by GerryD at 22:09