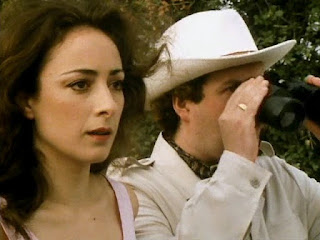 A young Spanish woman who worked at the Las Cadenas restaurant in Seville, Spain. She had a soft spot for an Englishman named Oscar, who was looking after the establishment for a friend. One day Oscar took Anita moth hunting, and they witnessed the arrival of a Sontaran spaceship at a remote hacienda. Oscar was reluctant to get involved, but Anita was keen to help the Sixth Doctor and his companions.
Some time later, the Androgum Shockeye arrived at the restaurant with the Second Doctor, who had been partially transformed into an Androgum. Anita alerted Oscar to the gargantuan bill which the pair had run up. When he challenged them, Shockeye killed him, leaving Anita distraught.