Into The Dalek - Review 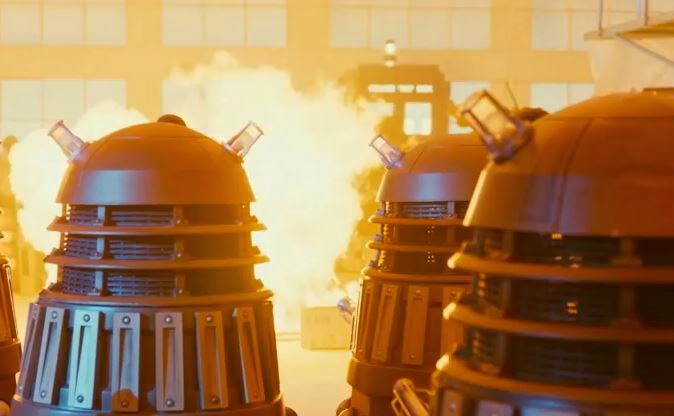 I must admit that I was not particularly looking forward to this story. I am really rather bored with the Daleks, and recent outings have been a bit disappointing.
Was this story here because the Daleks needed a further adventure, or was this just the safety measure of having a new Doctor meet them early on to help reinforce his credentials as the New One? I suspect more of the latter.
I did come away from watching this pleasantly surprised, however. It wasn't that bad. Indeed, it might be a decent story for the Daleks to be rested on for a couple of years. Leave it to Big Finish to continue to churn out Dalek stories for while. (It's every other one, isn't it? That's what it feels like...).
It is always nice to see the Daleks simply set up as a powerful destructive force - going about their daily business of Extermination. Director Ben Wheatley offered up some great action sequences - including a very impressive exploding Dalek (the one hit by Major Blue's forces - rather than the ones slaughtered by "Rusty" later on).
Visual effects were impressive - from the spaceships in the asteroid field to the "subaquatic" transition from the nano-pod into the Dalek eye.
Lots of influences on show - the 1966 movie Fantastic Voyage in particular. This reference was quite blatant - the Doctor actually suggesting shrinking medics to treat someone from within might be a "fantastic idea for a movie". Of course, that movie had also been an influence on The Invisible Enemy back in 1977.
You will also have noted similarities to 2005's Dalek, last year's Journey To The Centre of the Tardis, and the antibodies and miniature people inside a machine-being from Let's Kill Hitler.
One thing that didn't work quite so well was the whole bit about being inside the Dalek. Daleks are only worth bothering about when we are on the outside - watching them in action. Inside, the Doctor and company could just as easily have been in a spaceship or a factory or something. Only when the Doctor came face to eyeball with the mutant did we really get the impression we were seeing the inside of this thing.
Daleks aside, the story helped to move on Clara's story. It has been some time since the Doctor went to fetch coffee in Glasgow. Danny Pink, fellow teacher, is introduced. He seems to be harbouring a secret - that he killed someone out-with his duties as a soldier, or at least feels responsible for a death. Will he be a straightforward recurring character, or is there going to be something special about him that ties in with this series' story arc? (Talking of arcs, Missy from the Nethersphere was back again - still hoovering up people whose encounter with the Doctor has left them just a little bit dead). The fourth episode - Listen - promises to see Danny and the Doctor meet - and we all know what the Doctor thinks about soldiers...
Once again, a great performance from Capaldi. I am loving this spikier incarnation. Back in 2005, a Dalek thought that the Doctor had the potential to be a good Dalek. In 2014, it seems he may have realised that potential. First sickness made the Dalek want to destroy its own kind. But, after the Doctor intervened, it was the Doctor's own hatred that inspired it.
Next week we have the Robin Hood story to look forward to. Hopefully a chance to see a much lighter side of this darker new Doctor.
Posted by GerryD at 18:36