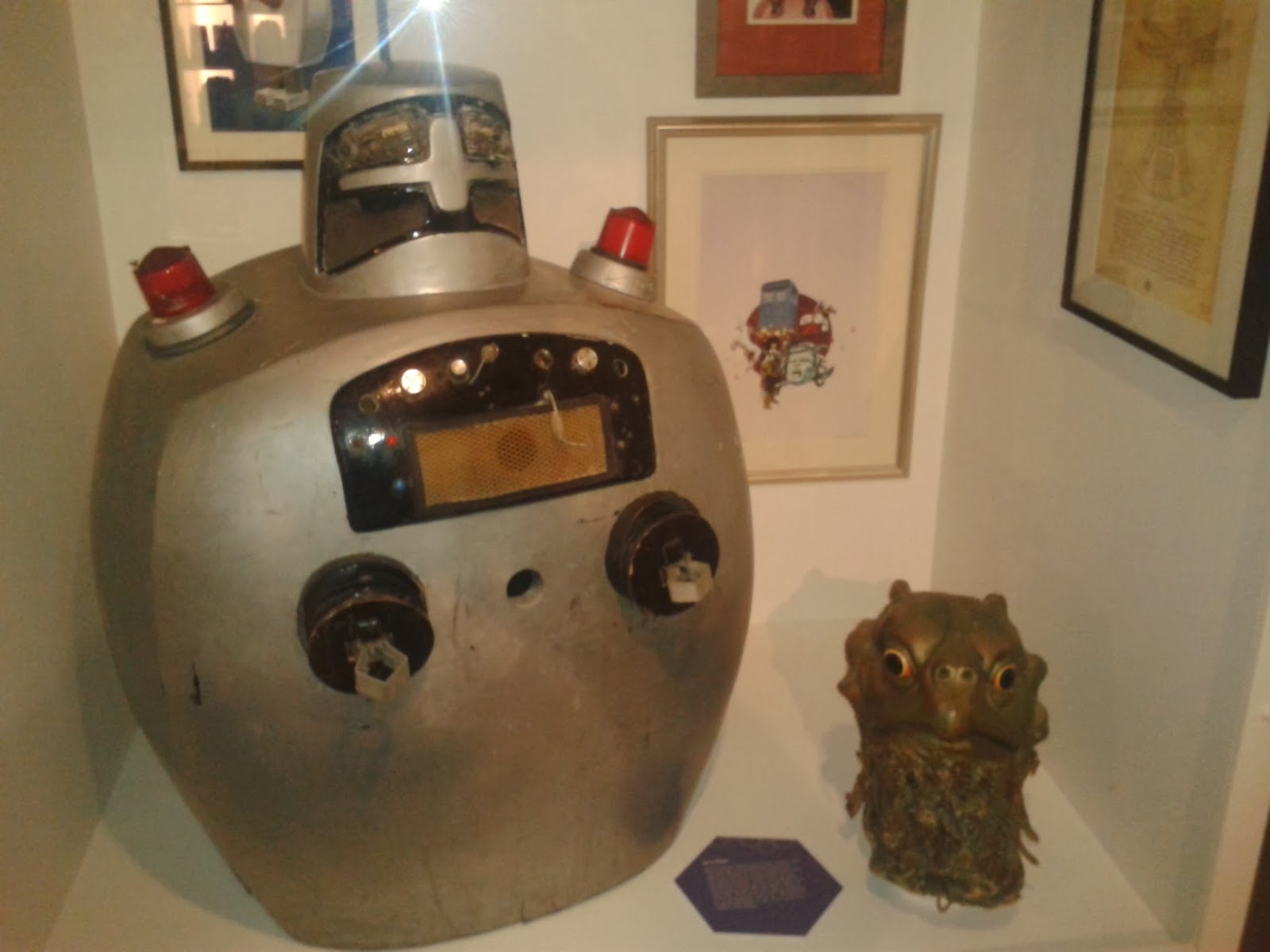 Just spent a wonderful weekend in Bradford, Yorkshire. On Saturday morning my brother showed me his "museum". His loft is packed with memorabilia primarily relating to the Soviet Union - uniforms, medals, banners, publications, statuettes. Every inch is covered. I mention this as, a few hours later, we were in the exhibition of Doctor Who fandom at the city's National Media Museum. It was the penultimate day, and still very busy. As I wandered round, I realised how many of the items on show I had once owned myself. Had I retained everything, I would have needed a "museum" like my brother's. Sadly, things were lost, given away, discarded, damaged over the years. There were two main elements to the exhibition - merchandising, and fan-made replica props. It was lovely to see an original item on show, however - the Servo Robot from the Patrick Troughton Cyberman story The Wheel in Space. Until I bought Marcus Hearn's The Vault book late last year, I had no idea this prop still existed. 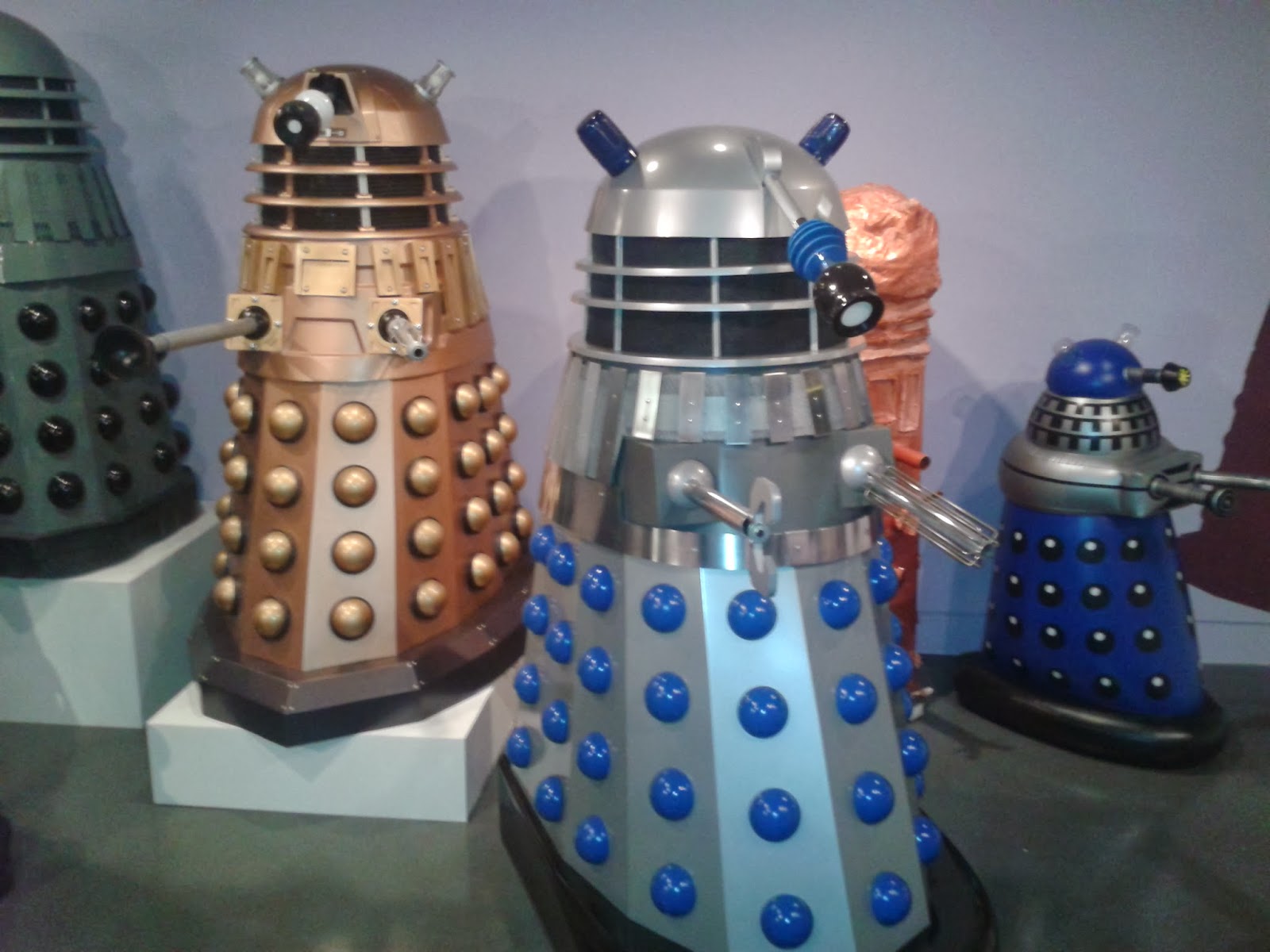 There were a number of Daleks on show - excellent reproductions, though my favourite was the gold cardboard one you can see below. It is amazing how, despite its naivete, it is still indubitably recognisable as a Dalek. 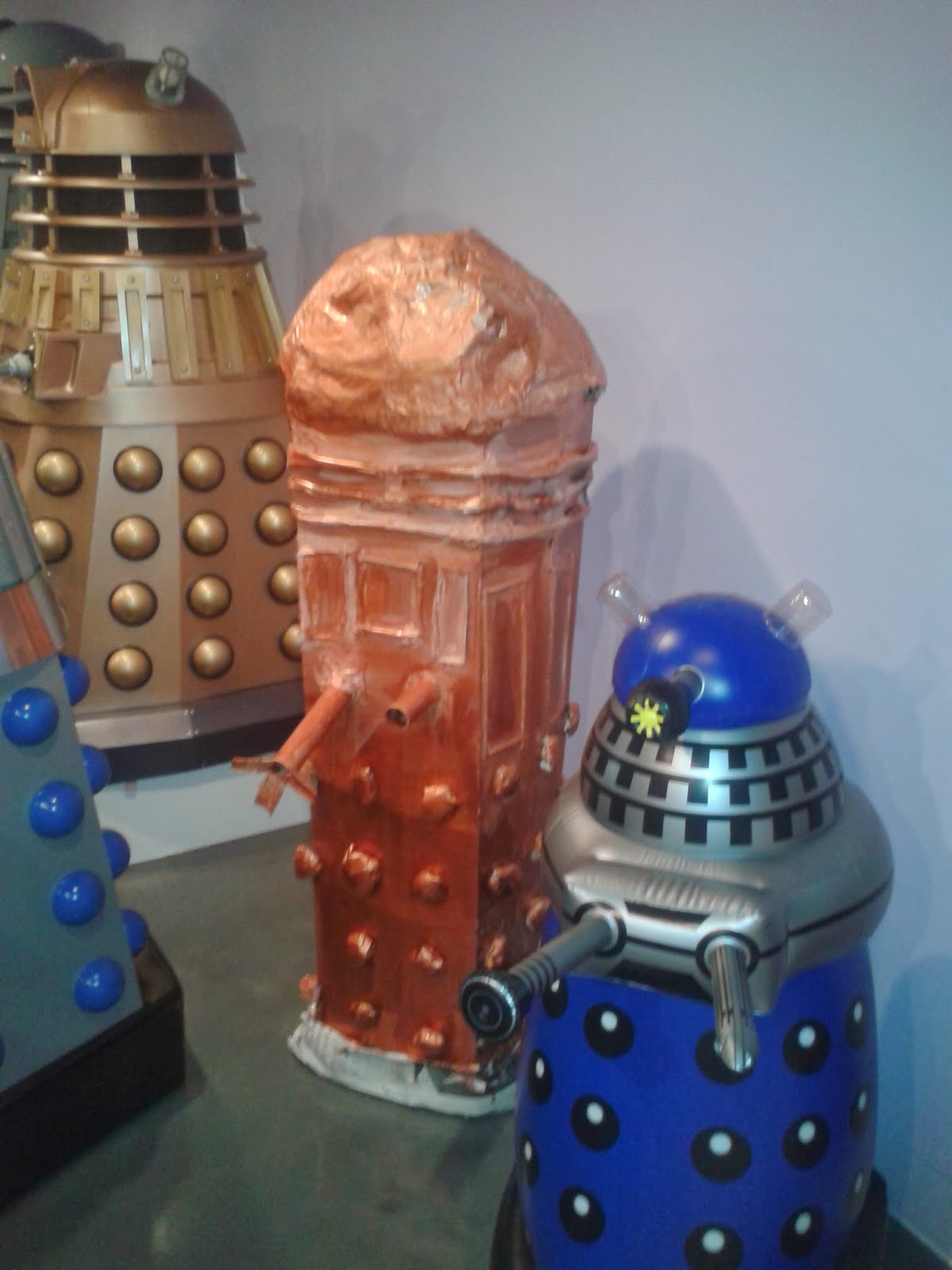 A couple of Cybermen as well - a superb copy of one from Tomb of the Cybermen, along with a Cybermat - and one from Silver Nemesis. A Revenge Cybermat was also to be seen. Most hilarious item was a full size Tom Baker model, which sadly would not have looked out of place atop a bonfire on November 5th. 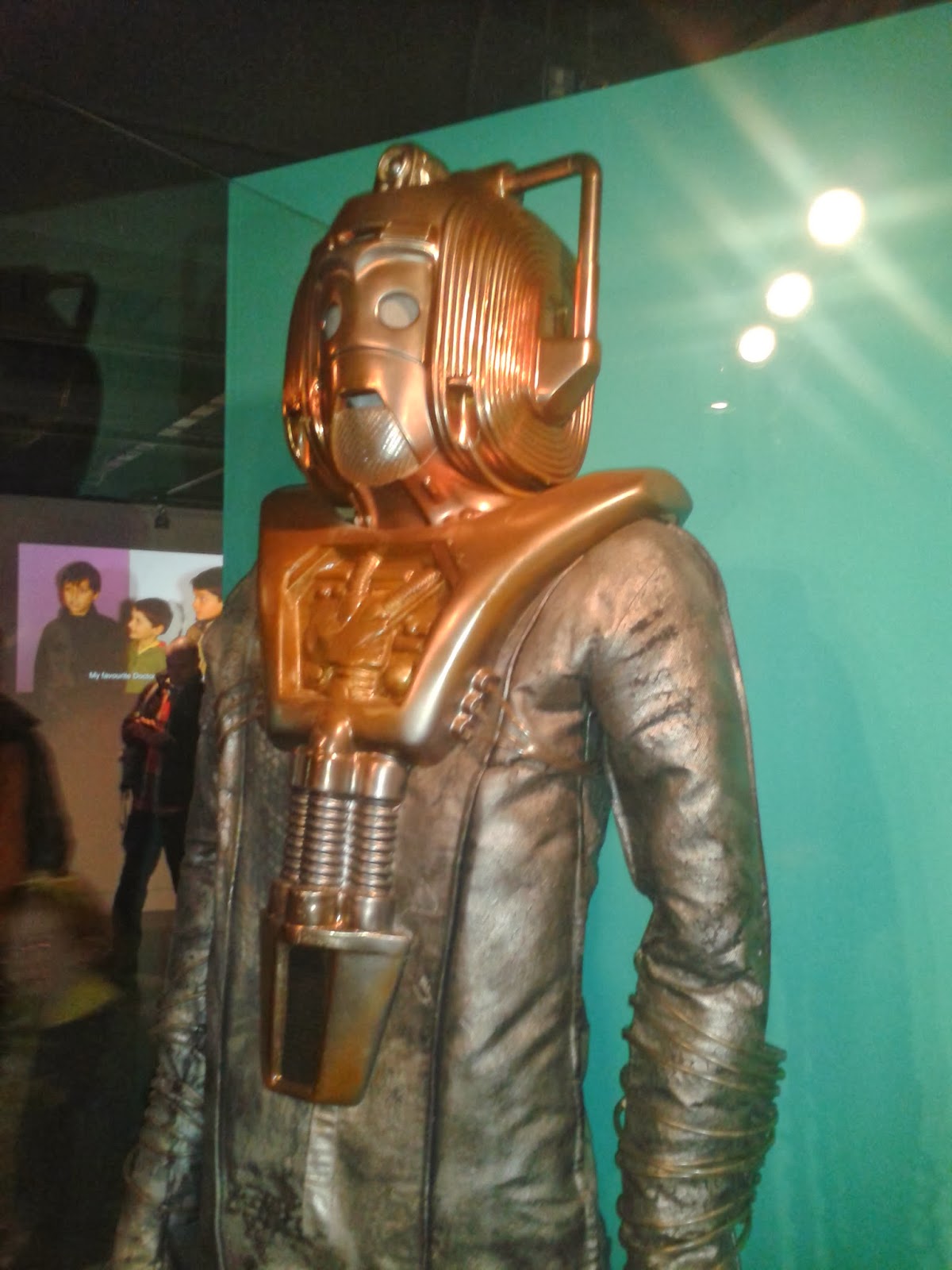 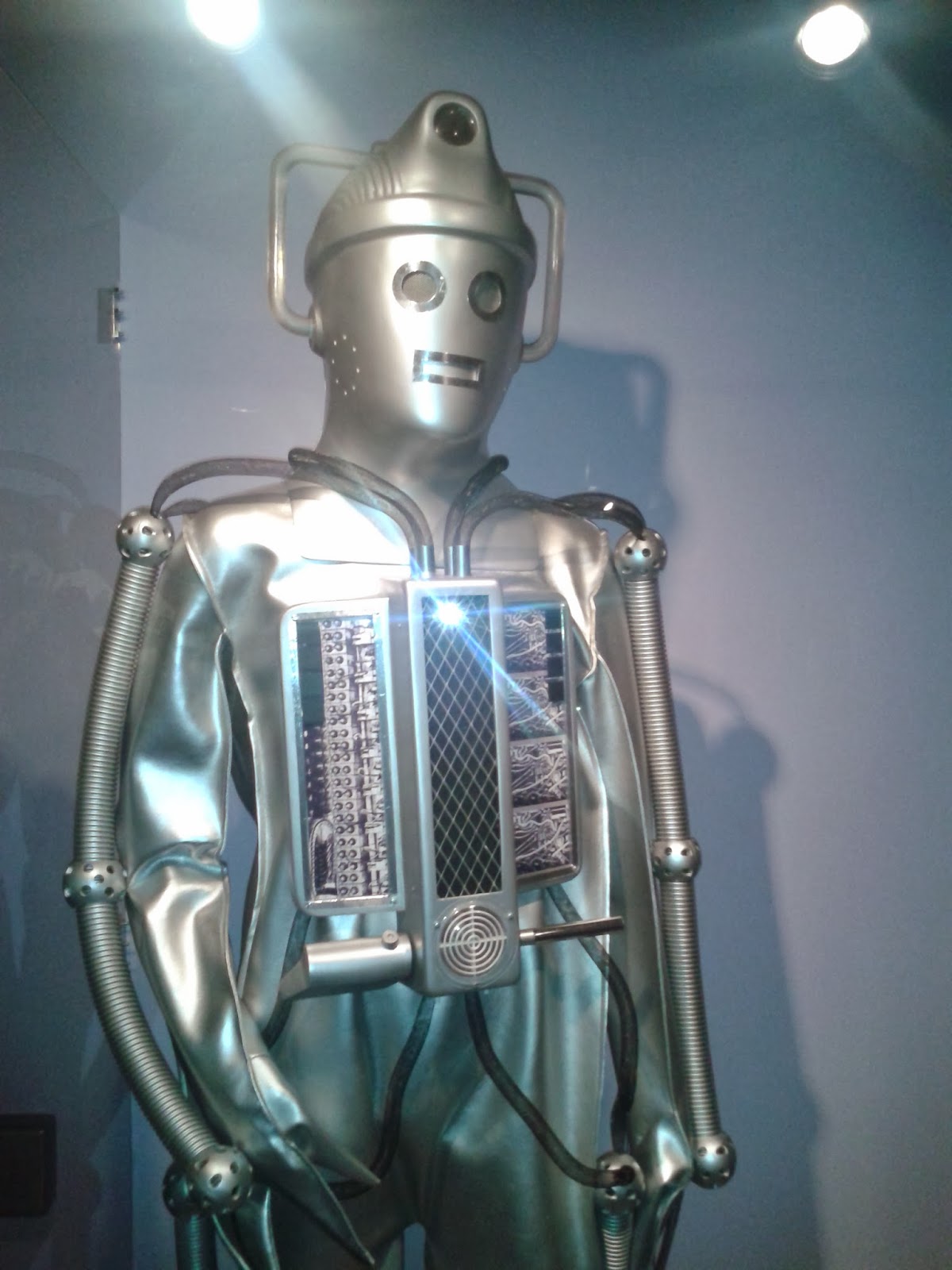 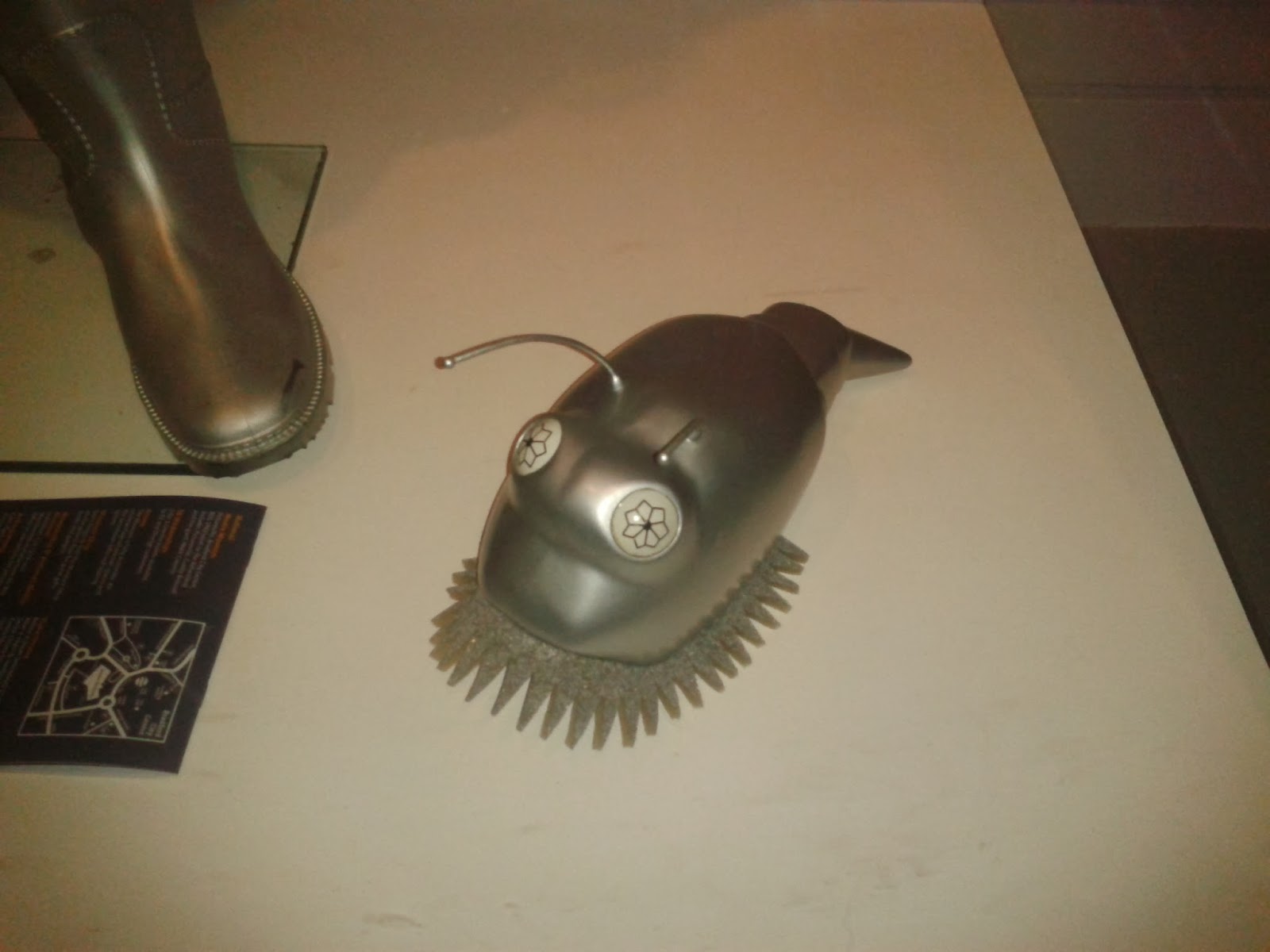 The merchandise covered some Hartnell items - annuals and jigsaws, but most was post 1974. There were Weetabix figures, Typhoo Tea cards, the first Target "Monster Book". Lots of art work on display - some fan-made, others professional artwork from novels. One case had a collection of foreign language Target novelisations. 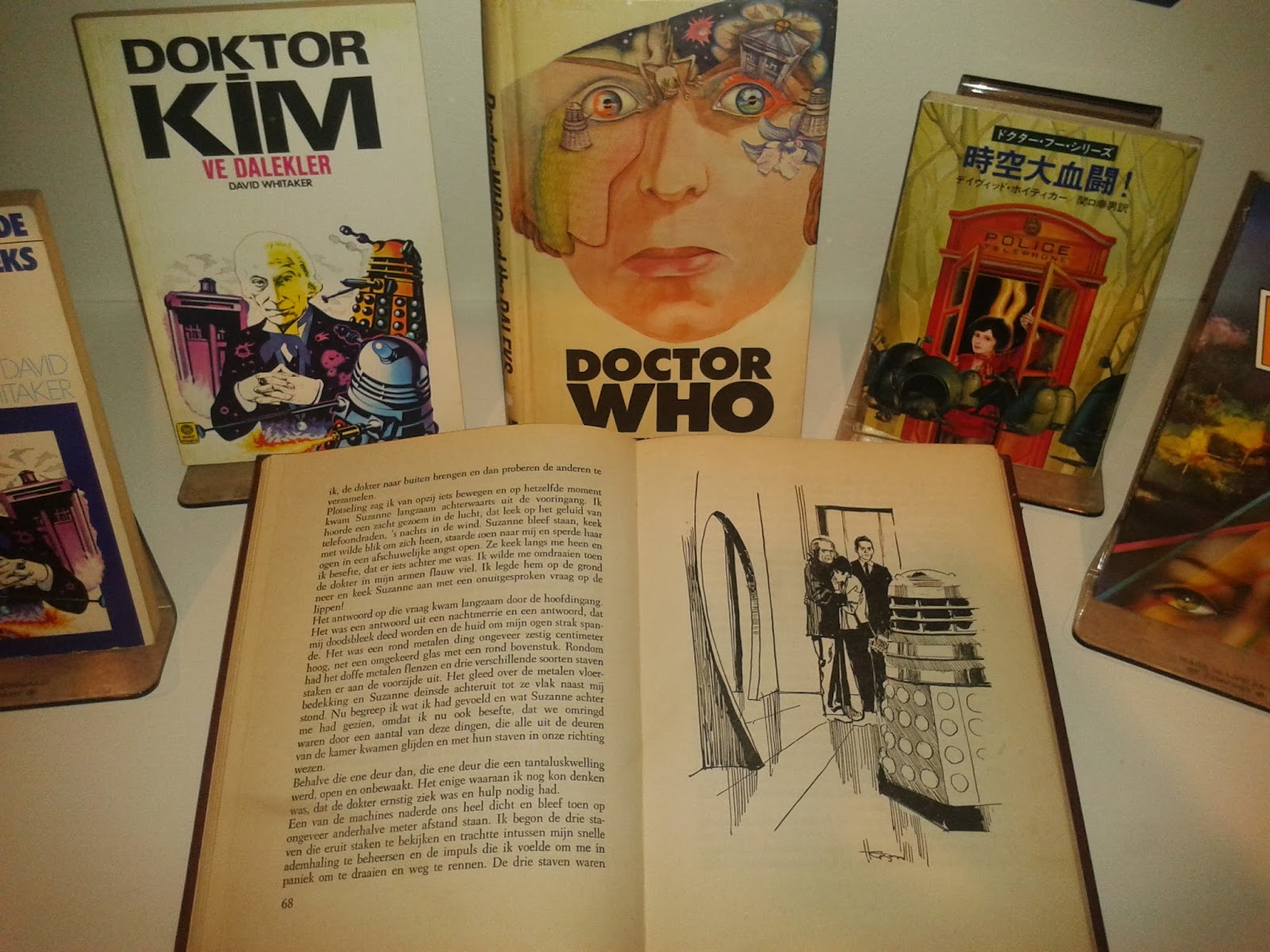 More recent items included BBC VHS and DVD covers, Character Options figures and micro-figures. As you walked round, you found yourself carrying out a mental inventory: got that, had that, had that, got that...
A few items had been autographed (such as a pair of Converse trainers (by David Tennant) and a mug (by Arthur Darvill). 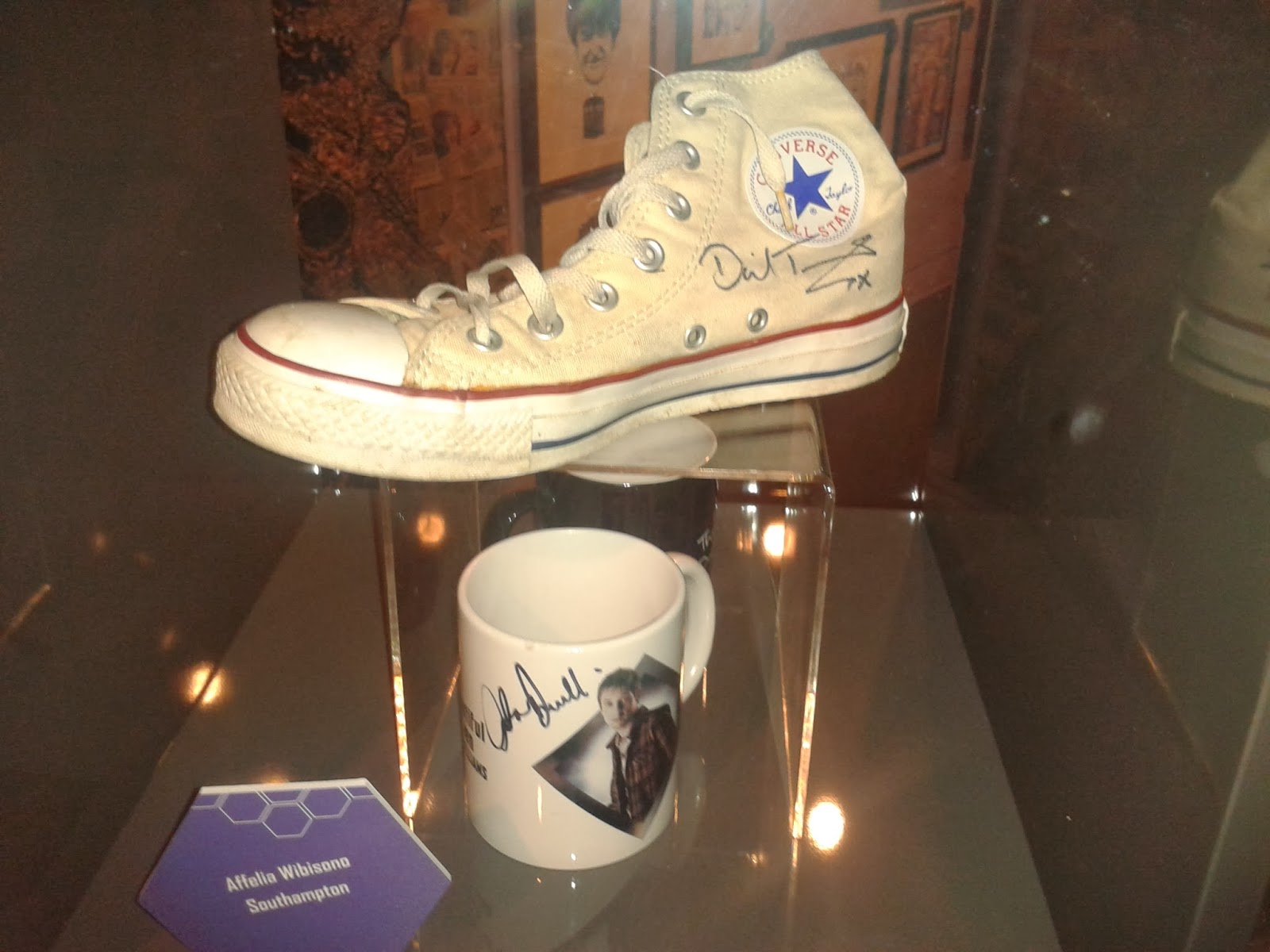 A thoroughly enjoyable experience overall - one I'm very glad I was able to catch. I strongly suspect that it would have been we older fans who would have got the most out of it. 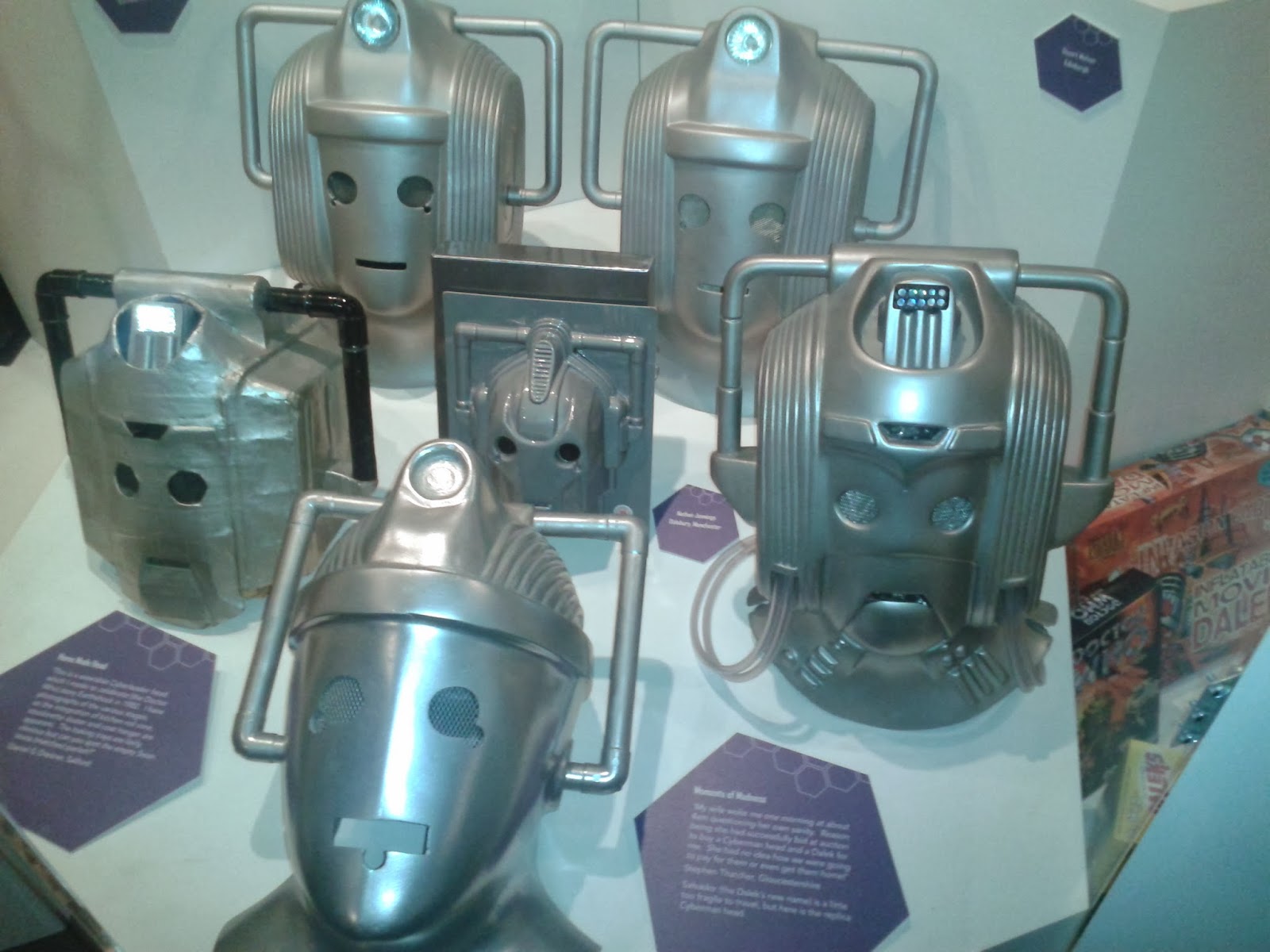 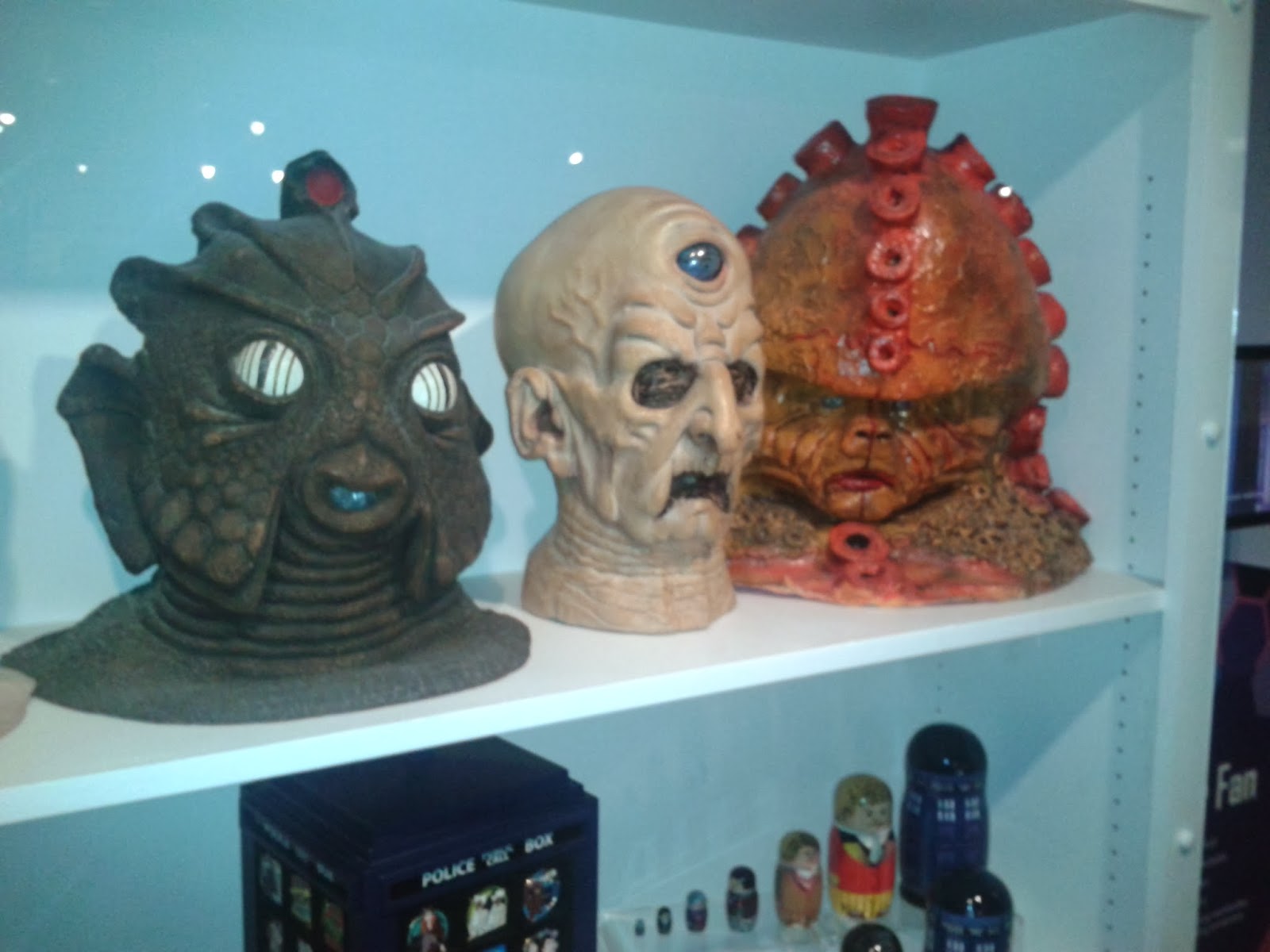