Story 90 - The Robots of Death 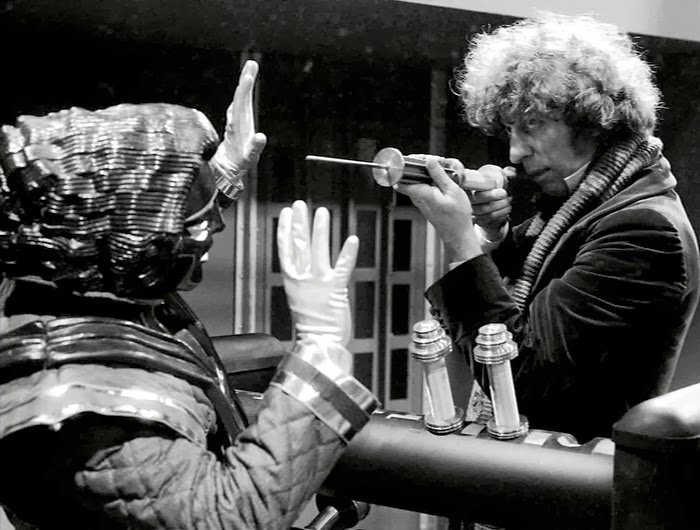 In which the TARDIS materialises inside a metal structure in the middle of a desert on an alien world. The Doctor recognises this as a mineral trap used by Sandminers. These vast factory ships traverse desert regions, blasting material into these traps where valuable ores can be harvested. They must get out of here before the sand, travelling at high velocity, tears them apart - but a mechanical claw has removed the TARDIS. The trap is closed at the last minute, and they are rescued by elaborately designed robots. The Sandminer has a small human crew, but there are dozens of these robots on board to carry out various functions. The majority of the robots are green Voc-Class units, which can carry out a wide range of tasks and can speak. There are also a number of black Dum-Class units which cannot talk and carry out the more menial functions. Each Sandminer has a silver Super-Voc on board, which acts as a supervisor to the others and liaises with the humans. On this Sandminer  - Storm Mine 4 - this is SV7.  A murder has just been committed on the vessel, and Commander Uvanov naturally suspects the Doctor and Leela of the crime. Chief Mover Poul is not so sure. 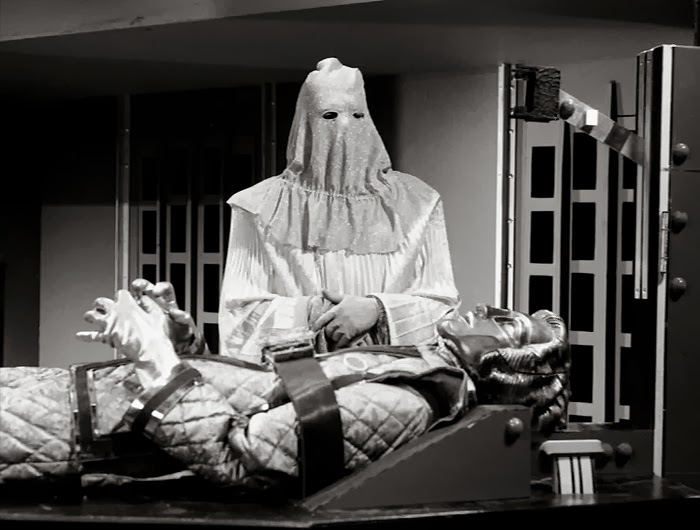 Leela suspects there is more to Poul than meets the eye. The Doctor and Leela escape custody and other murders take place. The Doctor manages to convince Poul that the robots might not be benign. He and Leela have encountered a Dum-Class, D84, which can talk. It transpires that a criminal named Taren Capel is believed to be on this Sandminer. He is a brilliant scientist who was brought up in the company of robots and values them over humans. He is planning a robot revolution. Poul is really a government agent, placed onboard to identify him, and D84 is his robot partner - a disguised Super-Voc. The robot joins forces with the Doctor and Leela when Poul falls ill - a mental condition named Grimwade's Syndrome, or Robophobia. His mind has snapped at the prospect that the robots can kill. 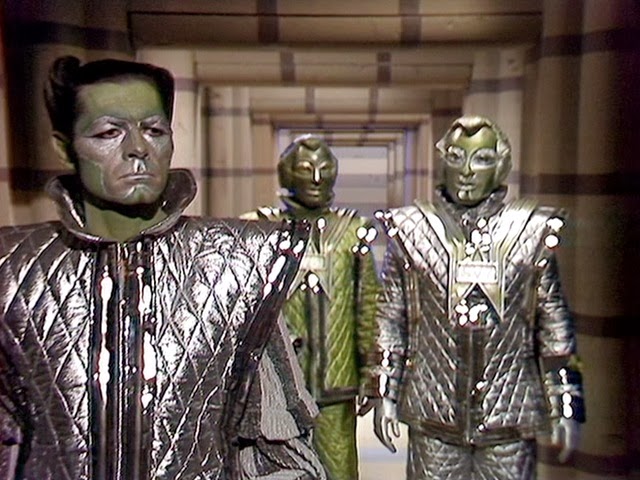 It is revealed that crew member Dask is Capel. He has been altering the robots' circuits to override their prime directive. He uses voice control to direct them to kill. Soon only Uvanov, Poul and second-in-command Toos remain alive of the human crew. The Doctor devises a scheme to destroy the robots then goes to confront Capel. Uvanov and Toos go on the offensive with blasting packs. The Doctor hides Leela in a compartment in Capel's laboratory with a cannister of helium. The gas causes Capel's voice to change - and the robots no longer recognise or obey him. He is killed by SV7. D84 activates a device which the Doctor had built to destroy the robots - sacrificing itself. The Doctor and Leela decide to slip away before a rescue ship arrives. 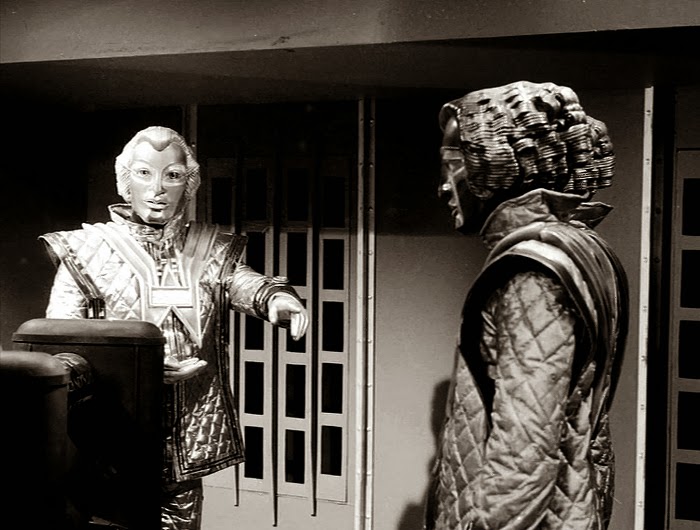 This four part adventure was written by Chris Boucher, and was broadcast between 29th January and 19th February, 1977.
The main influence is obviously the works of Isaac Asimov and his Laws of Robotics, but Frank Herbert's Dune, and the murder mysteries of Agatha Christie are also evident. It is a shame that the rather lurid story title gives the game away from the start that it is the robots who are doing the killing. Perhaps they should have stuck with one of the working titles: "The Storm Mine Murders". That Dask is Capel is apparent too early on also (clue: trousers).
Capel's name is an homage to Karel Capek - the Czech writer whose play R.U.R. gave us the word "robot".
It is Asimov's First Law of Robotics: "A robot may not injure a human being, or through inaction, allow a human being to be injured" that Capel overrides. The story implies that Capel is half-robot in a biological sense (his father was a robot) but this seems a preposterous idea.
The design work on this story comes together like very few other stories of the classic era. Costumes (Elizabeth Waller), sets (Ken Sharp), and make-up (Ann Briggs) all evoke an Art Deco feel. The human costumes might be a little over the top (especially the head gear) but the robots are superb. To have the killers of the title look so beautiful, with slow graceful movements and mellifluous voices, is a stroke of genius. They talk of killing in such a matter-of-fact way. 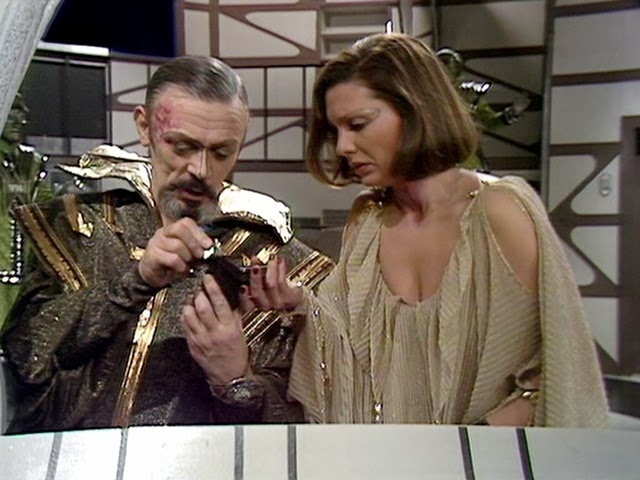 There is a very good guest cast on show. Uvanov is played by Russell Hunter, best known for the crime drama Callan. He seems to be a rum 'un, having caused the death of the brother of one of the crew on a previous mission - but we find out he wasn't responsible, and actually tried to cover up the true nature of the death to protect the family. Toos is Pamela Salem (who had provided one of the Xoanon voices in the previous story). Poul is played by David Collings, last seen as Vorus in The Revenge of the Cybermen, from the same director - Michael E. Briant. Dask is David Bailie - most famous these days for his regular role in the Pirates of the Caribbean movies. He has also become the Big Finish Celestial Toymaker.
Special mention should be made for two artists we never get to see - Gregory de Polnay (D84) and Miles Fothergill (SV7).
Episode endings are: 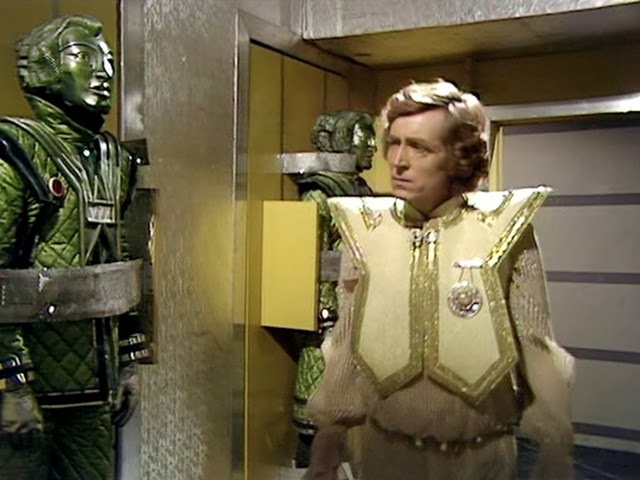 Overall, an excellent story. One of the best of the original series. Good production values (especially design) and a great cast. Even Tom Baker loved it, and he didn't usually like anything he did. Despite seeing only a handful of crew, we get a real sense of the society they come from - events in Kaldor City and the status of the Founding Families. This story helped launch both the VHS and DVD release schedules.
Things you might like to know: