Mission to the Unknown - The Remake Reviewed 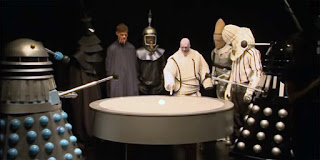 Earlier this year it was announced that students from the University of Central Lancashire were going to recreate the lost Doctor Who episode Mission to the Unknown, as part of an academic exercise in TV production techniques. The project got the blessing of actors Edward de Souza, who played Space Security agent Marc Cory in the original 1965 production, and Peter Purves, who was travelling in the TARDIS at this point in time, although he did not feature in the episode itself. Voice of the Daleks Nicholas Briggs also agreed to join the team. News reports followed, along with some making-of material, and what every fan wanted to know was: when might we all get to see this? Might it turn up as an extra on a future Season 3 Blu-ray box set?
Well, earlier this evening - at 5.50pm on the 54th anniversary of the original broadcast - the episode was premiered on the official Doctor Who YouTube channel, and I've just watched it.
The version I have just watched begins with the trailer which we first saw last week, followed by an introduction from de Souza.
Normally, student drama would make me run to the hills, but this was a professionally accomplished piece of work. With no TARDIS crew featuring in the episode (which some class as a story in its own right, whereas others see it as simply the prologue to the 12 part The Daleks' Master Plan - its 13th episode, as it were) - the action centres primarily on just two actors, playing the characters of agent Marc Cory, and the spaceship captain Gordon Lowery. Here they are played by Marco Simioni and Dan Gilligan respectively. And very good they both are. Only one minor gripe - Gilligan is a young man, so it is rather odd to hear Lowery talk about working with colleague Garvey for the last 10 years. (Only other minor gripe - one of the Daleks has the bigger bumper at its base, a design which had been discontinued after The Dalek Invasion of Earth).
The episode is presented in good old Black & White, and the look of it certainly matches the original episodes we have in the archives from Master Plan. The jungle sound effects likewise.
The Daleks don't feature all that much, but they are joined by the assorted delegates of the Outer Planets who make up their alliance which plans to wage war against the Solar System in general, and Earth in particular. Paul Stenton's Malpha gets quite a lot of dialogue, and he captures the hoarse vocals of the original. Their costumes / make-up are reasonably well done, when you compare to the photographs from the original production. Sets have also been lovingly recreated from the scant visual references we have. The late Ray Cusick gets a credit. 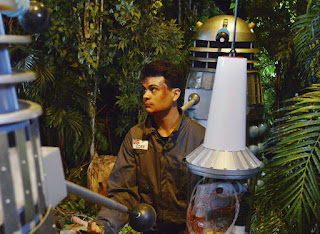 I am generally averse to missing episodes being recreated, preferring the DVD / Blu-ray producers to go down the animated route as that way we still get to savour the vocal performances of the original actors, even if we can no longer see them. However, as none of the regulars featured in this episode, it is the one and only time that I will welcome it.
The students of UCL can get a 9.5 out of 10 from me. Do check it out here: https://www.youtube.com/watch?v=NW8yk-m5Ig8
Posted by GerryD at 20:49