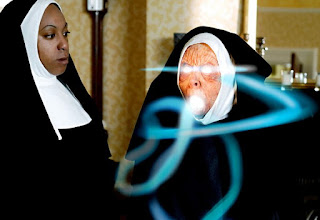 An ancient alien race which had visited the Earth thousands of years ago. They inhabited human bodies, giving them a prolonged lifespan, and they had the power to turn people to stone. It was they who gave rise to the Greek myth of Medusa and her sisters. The last of their number was being looked after by the nuns of the Abbey of St Agnes. She was dying, and wished to reopen the portal which had brought her to Earth so that others could follow - but the talisman needed to do this had been lost. It had been found in the Middle East in the 1930's by an archaeologist named Nelson-Stanley and his wife Bea. She now lived in an old people's home, and the nuns of St Agnes had traced the talisman there. Bea gave the object to Sarah Jane Smith's son Luke for safekeeping. He was later abducted by the nuns, and Sarah was then captured when they came to her home - when Maria Jackson's father Alan was transformed to stone. The nuns intended to use Sarah as the new host for the Gorgon. She was able to use a mirror to cause the Gorgon herself to turn into stone, and the talisman was removed to stop the portal from re-opening fully. The nuns were freed from her influence. The talisman was able to restore Alan Jackson.